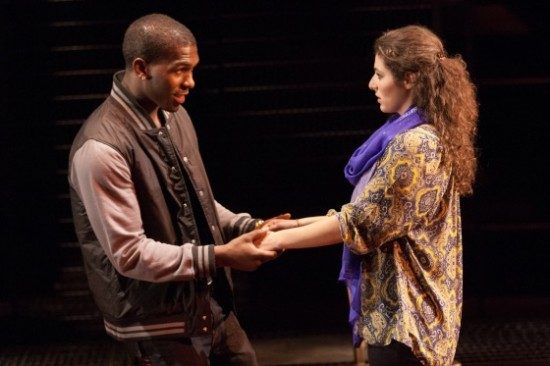 Khris Davis as Duke and Melis Aker as Roya. Photo by Teresa Wood.

Love in Afghanistan, Arena Stage’s world premiere of Charles Randolph-Wright’s new play, has all the themes that would make a Washington liberal proud.  A bi-cultural romance built on mutual respect; a concern for how the Taliban view and treat Afghani women; a Hip-Hop “gangster” artist who breaks the stereotype of all bling and bravado; a proud Afghani woman who, like Pakistan’s Malala Yousafzai, is willing to sacrifice her own life for the betterment of Afghani women in general; a celebrity “star”—used to always getting what he wants—being rejected by an authentic freedom fighter.

…a second act that sizzles.

Love in Afghanistan even has all the theatrical potential to capture our imagination and engross us in its action.  Not only do we have that hip-hop artist to entertain us and add some pop, but we also get a bit of a drag show (woman as man) and some explosions and intense interrogation scenes. 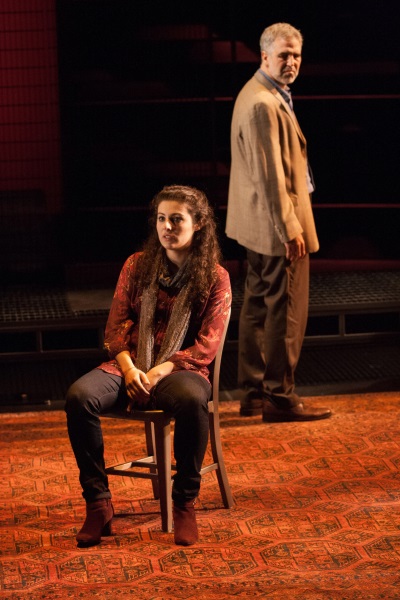 Melis Aker as Roya and Joseph Kamal as Sadeed. Photo by Teresa Wood.

Unfortunately, any reality-based theatregoer who witnesses Randolph-Wright’s play as it unfolds within Kogod’s Cradle and its intimate 200-seat auditorium.

The problem with Love in Afghanistan is not in the veracity of its themes and theatrical potential, or in the passion that Melis Aker brings to the determined young Afghani freedom fighter, Roya: her second act portrayal of the young woman’s passion for her country and for the salvation of its women is riveting.  The problem with this play is that its primary story, the story of Duke (played by Khris Davis), an emerging hip-hop artist who goes to Afghanistan to entertain the troops, and his attempt to woo the headstrong Roya, never materializes on stage. Instead of the promised first act romance, we have a muted, “let’s get to know one another chat session” that drags itself into the intermission.

Fortunately, the play comes back to life with a second act that sizzles.

Roya’s father Sayeed (played by Joseph Kamal) hooks up with Duke’s mother Desiree (played by Dawn Ursula) in a scene that is as delightfully enthusiastic as the younger couple’s romance is ironically suppressed. These two actors capture not only their blossoming love between one another but also the parental dimensions of their respective characters.  Their angst is both believable and authentic.

Also, as I mentioned before, Ms. Aker takes the lid off in the second act, allowing us to glimpse momentarily the depth of Roya’s commitment and determination to change her world.  Though I personally would have liked to see a little more of that “woman” Roya speaks of, aching to be liberated in her overly masculinized world, that lack has more to do with the structure of the play than with Ms. Aker.

The problem with Love in Afghanistan lies in the character of Duke, both as he is written and as he is portrayed.

Randolph-Wright clearly steps into unknown territory when he decides to create a realistic script about a war-torn Afghanistan.  Much like Duke, the burgeoning hip-hop star from Washington’s Gold Coast (aka upper 16th Street, NW), Randolph-Wright attempts to represent the nearly impossible when he has the young singer court an Afghani woman who, though independent and educated, has spent most of her life under Taliban rule.  Beyond the inaccuracies that may exist in how Bagram Air Force Base operates, Randolph-Wright does not establish the necessary “love madness” that would explain why Roya would risk everything so as to satisfy Duke’s superficial desire to fetch a piece of lapis, a precious stone plentiful in Afghanistan.  And why would she ever do such a thing to please a man absent the chemistry of infatuation?

On the other hand, the honesty that Khris Davis brings to the part is important; for as the character mentions in act two, his relationship with Roya elicits just such a desire: to engage the world and her honestly, “for the first time.”  Unfortunately, Davis’s portrayal never has an affected persona that it not “honest.”  In other words, we never see the “player” that he supposedly is; so we never experience the transformation in his character.  It is as if, upon seeing Roya for the first time, he instantly becomes the honest man he eventual should become.  Perhaps, if we had experienced that “player” and then seen him implode, then we might have understood the power that Duke and Roya’s relationship had on them.  Ironically, with that “player” bobbing in and out of his performance of self, we might also have had the opportunity to believe or accept why, in the infatuation of the moment, the otherwise “wise” Roya would have been willing to step beyond the rules in such a dangerous way but for so little gain.

Unfortunately, we do not get any of the dynamism that would make such an impossible relationship between opposites interesting and believable. Even moments that had incredible potential, such as Duke’s rapping of Rumi, were performed in a repressed manner, thus weakening their impact. So instead of an impossible relationship blossoming before our eyes, we are given a “safe” portrayal: one that is seemingly meant not to offend by stereotype. 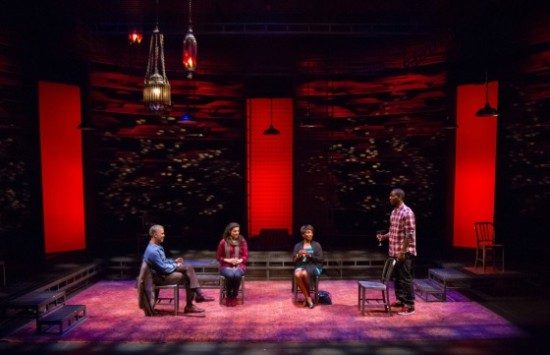 The play’s powerful second act cannot be ignored, however, as the play surfaces in a meaningful way the importance of self-determination.  Roya’s defense of her decisions to remain in Afghanistan is touching: how much more powerful that decision would have been if her love for Duke had been manifest, we will never know.  Secondarily, even Roya’s father, long in a friendly if loveless marriage, discovers the personally transformative power of romantic love.

Lucie Tiberghien’s direction is particularly strong in the second act, as she ably brings out the script’s humor, but she had no solutions to the challenges that Act 1 presents.

The production team assembled for Love in Afghanistan did an excellent job creating a minimalistic world.  Daniel Conway’s metallic set was off-set nicely by the light and shadow of designer Mark Lanks’ lighting.  Kathleen Geldard also put together a very believable wardrobe for the bi-cultural cast.

I have a curious observation about the set, which covered the Bagram Base’s floor with a Persian rug that was once owned by the last king of Afghanistan, King Mohammad Zahir Shah.  The fact that such a rug would end up on an American Air Force Base is a story all its own.

And that is perhaps what is most telling about Love in Afghanistan.  As the second act moves forcefully to conclusion and we learn more and more about the intricate and dangerous life of the young feminist Roya, it is her tale that we long for.  It is her tale that captures our imagination, leaving us longing for a dramatization of it, not an ill-fated love affair that by play’s end seems as superficial as any Hollywood blockbuster.

That story, however—her story—is a tale that an American playwright like Charles Randolph-Wright is even less prepared to tell.

Running Time: a little over two hours with an intermission.