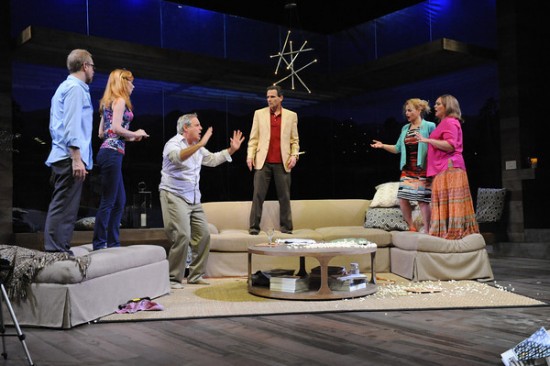 The cast of Rancho Mirage. Photo by Stan Barouh.

With substantial support from the National New Play Network, Olney Theatre is joining two other American professional theatres in birthing Rancho Mirage, the new play by acclaimed American playwright Steven Dietz, directed at Olney by Jason Loewith. And indeed, such a nurturing embrace of new theatrical work inspires keen applause.  Certainly, the friendly audience at the Press Opening of Rancho Mirage warmly welcomed this new work, which is a recipient of a 2013 Edgerton Foundation New American Plays award.

And there is much to impress in this production–from the spectacular upscale set by Russell Parkman, dramatic lighting by Joel Moritz and perfect pitch costumes by Ivania Stack and sound by Veronika Vorel, to the crackling wit and crisply polished performances of the tight, 7-person ensemble and fluid, purposeful movement of the company across the luxurious living room onstage.

What is not clear to me, however, is how many other audience members left the theatre as surprisingly agitated as I did, or if such a turbulent response was in fact playwright Dietz‘s and director Loewith’s intent.  If it was, they succeeded thoroughly.  If, on the other hand, they were striving for a cathartic, compassionate response to the dismantling of the mirages of the wealthy characters, then the production significantly undershot its mark. 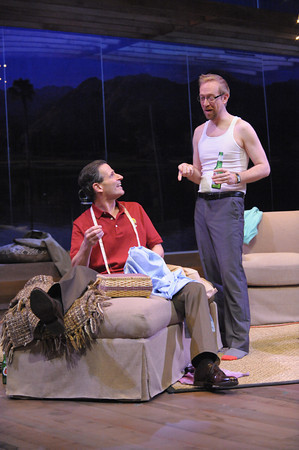 Trevor by Paul Morella and Nick by James Konicek. Photo by Stan Barouh.

In the play, three couples gather for what we eventually learn is the host couple’s last night in their expansive, glass-walled, foreclosed McMansion on the edge of a pristine man-made lake of the gated community of “Rancho Mirage.” Over the course of the play’s 2+ hours, these three couples reluctantly reveal the petty revenges and deceits on which their opulent lives and personally bankrupt friendships are based.

Despite the abundant wit and zingers of the production—and spot-on comic timing of the performers—certain of the play’s characters reveal themselves to be superficial, despicable people, and it is difficult to feel sympathy for them. The hostess and one of the other wives, particularly, are spoiled and trivial and solipsistic hypocrites who appear to hold each other—their ostensible best friends—in catty and viscous regard.  Several times over the course of the evening the couples cluster into same sex groupings, during which we learn more about what undergirds their friendships.  While the men do seem to have genuine camaraderie with each other, the women, conversely, appear to fundamentally dislike each other.  And all of the couples are incredibly detached from reality–living lives of such “mirage” in the play’s extended metaphor—although their reliance on these fictions presents more as juvenile immaturity than as examples of Freud‘s “necessary illusion” on which one’s whole identity depends.

Driving this mirage of affluence is the host couple, Diane Dahner, played with cool self-confidence by Tracy Lynn Olivera, and her erudite but unemployed architect husband Nick Dahner, intently played by James Konicek. Over the course of a kind of “Albee-lite” night of drinking, inexplicable, even ridiculous secrets pour out of all the characters with their pathological attachment to obfuscation.  Nobody has told his or her “intimates” anything heretofore, though such secrecy seems motivated by mere convenience, not deep emotional need. George and Martha, of Virginia Woolf fame, these couples are not.

Well into the second act, the hostess Diane’s “best friend,” the hot and (until a few years ago) promiscuous college professor Louise Parker (Neese), played with snap and sizzle by Tonya Beckman, confronts Diane about not having “evolved” in the years since their first party-girl meeting in the ladies room of some club or party.  Stung, Diane becomes increasingly defensive, and so the play becomes about stasis—the stuckness of this sliver of rich people (aka, the 1%, or at least the 10%) who have lived much of their lives awash in creature comforts without any real problems to overcome.

And they are indeed stuck—the Dahners have clung to their opulent lifestyle even as their personal fortune evaporated during Nick’s architectural dry spell.  Implausibly in what is presumably a modern marriage, he has neglected to inform his bright, educated wife Diane, who, equally implausibly, remained clueless about their financial demise until it was too late. Hence, they continued to travel, most recently to Tuscany, to dine out, to entertain, and otherwise maintain their lifestyle of the rich and famous until they are now penniless and foreclosured upon come morning. 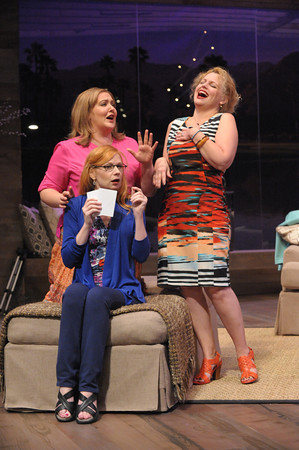 The other couples too have their issues.  Bitingly humorous Louise and her mild-mannered, possibly closeted gay husband Trevor Neese—played with muted resignation and a kind of sad kindness by Paul Morella—are separated.  Divorce appears imminent though the reasons for it seem trivial.  The third couple—the childless, less affluent, and church-going Pam and Charlie Caldwell, both played with dreamy and absurd flights of fancy by Susan Lynskey and Michael Russotto, respectively–are set to adopt two young traumatized Eastern European orphans. The husband Charlie, using signatures on blank papers created in a trust-building exercise some months back, fantastically has petitioned for the children’s adoption, unbeknownst to his wife Pam.  After various vacillations and the revealing of more secrets they decide not only to pursue the adoptions, but to move to the children’s native country and make a home for them there.

Magical thinking on all fronts abounds.  When Diane comes out at the end with an apronful of coins she has gathered from suitcases and piggy banks—like a teenager looking for cigarette money–only then is there a crack of realization of what awaits them.

Presumably, the magical thinking of all three couples is meant to be perceived of as just that—mirages of simple solutions to their own failings–but the dominant emotion engendered by the ending is not one of real consequences, but of a continued suspension of reality for all concerned.

Interestingly, the immaturity to these people’s illusions is made all the more apparent by the entrance of the only “reality-based” character in the play—the 17-year-old babysitter Julie, who appears near the play’s end to demand payment in real dollars for her months of real, uncompensated babysitting. Authentically played by Sydney Lemmon with a girl-next-door likeability, Julie is owed over $300 by the Dahners for her babysitting labor and –unlike anyone else in the play—money is actually real to her.

…there is much to impress in this production

It is the unenviable task of the contemporary Western playwright to hold modern audiences accountable for our failings. Neil LaBute gives us the misogynistic cruelty of modern men, August: Osage County playwright Tracy Letts gives us the venomous cruelty of modern family, Bachelorette playwright Leslye Headland gives us the manipulative cruelty of modern women.  Rancho Mirage playwright Steven Dietz—who enjoys the same high artistic standing as these other playwrights—absolutely pulls his punch, in my view, in unveiling the corrupt core of American affluence. Rancho Mirage begins to strip us of these illusions, but it is more a prelude to the fall than the fall itself.  Indeed, one wonders if the playwright’s social contract with the audience is just another mirage?  Are we to forgive these people their failings because they’ve made us laugh–can our moral affirmation be so cheaply bought—like the home-delivered pizza the babysitter Julie brings with her?

Can we, the upscale theatre-going audience of professional theatre today, really just sit back and let the people in Rancho Mirage entertain us with their wit and plot twists without having to take any self-examining lessons of it to heart?  I would hope not.

Running Time: 2+ hours plus an intermission.

Advisory: Recommended for ages 15 and up due to mature themes and some mature language