The cast of ‘Romeo & Juliet.’ Photo by Jeff Malet.

As directed by Aaron Posner, Shakespeare’s love tragedy, Romeo and Juliet (renamed Romeo & Juliet), should have been renamed simply Juliet, not because actors Michael Goldsmith (Romeo) and Erin Weaver (Juliet) are not the perfectly in-love teenage couple, because they are. In fact, their chemistry on stage is thoroughly engaging.

And it is not because Ms. Weaver does not portray the young, fiery 14-year-old with an unusual complexity and deep emotion, because she does.  In fact, Ms. Weaver’s performance is a multi-layered gem, with enough jutes and turn-on-a-dime emotional shifts to have made the ballerina-trained Hall of Fame running back Walter Payton proud. 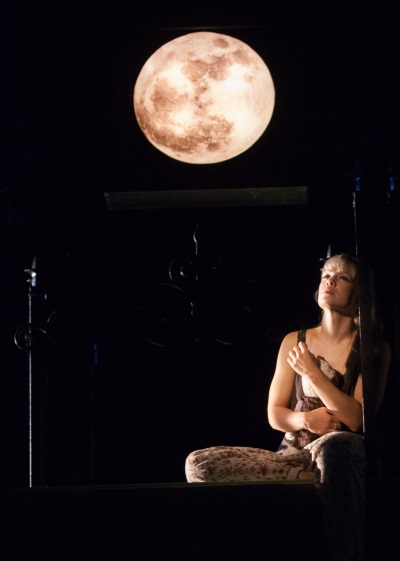 The reason this production is a Juliet has to do with the story that Posner elicits from Shakespeare’s text.  It is Juliet who aches for a different kind of life, sitting in her room reading and dreaming.  It is Juliet who faces the prospects of an arranged marriage, to a well-heeled man she does not even know.  It is Juliet who has survived, along with her mother and nurse, the terror of a violent, abusive father and husband.  It is Juliet, the beautiful, independent fireworks of a girl, for whom we pray.

Thus, when Romeo sneaks into her father’s party and their eyes meet, and their flirtation begins, and then quickly erupts into vows and a marriage, we want them to be happy; but not for Romeo’s sake, good looking lad though he be, but for Juliet’s.  May she reach her destiny wherever it takes her.

Thus, we have a Juliet, and this Juliet should not be missed: for she will linger like a dagger in the heart, leaving you yearning for a different kind of world.

With Romeo & Juliet Folger Theatre continues its stylistic “story first” approach to Shakespeare, and it continues to present Washington with enthralling theatrical fare, not built on elaborate spectacle but on that far more precious quality: authentic human behavior.

As performed by the 13-member ensemble, Shakespeare’s characters have never looked so human, and the list of startling performances is long.

Mr. Goldsmith’s Romeo does not ride the emotional rollercoaster to which the love of his life Juliet “holds on for dear life.”  Nevertheless, Goldsmith captures the young boy-man’s fierce infatuation, and his trickster charm, as well as his true yet fragile ethical center.

His friend, Mercutio, played by Brad Koed, is a delightfully thuggish lad more than willing to pick a fight or to taunt a love-sick Romeo to death.  Koed’s performance makes clear the youthful machismo at the heart of this searing tragedy.  Additionally, his scenes with Aaron Bilden’s rascally Benvolio are some of the funniest in the show.

Joining Ms. Weaver on the women’s side of the production is Sherri L. Edelen.  She turns in a rousing performance as Juliet’s former wet-nurse and now servant.  Her comic monologue near the opening of the show sets the mood for the comic elements in this otherwise body strewn play.

…this ‘Juliet’ should not be missed

Ms. Koob’s Lady Capulet, on the other hand, embodies the long suffering wife who, unbeknownst to the audience, has suffered relentless cruelty from the hand of her husband.  Occasionally, I swear, she looked as if raped.

And I would be remiss if I did not mention the performance turned in by that husband.  Brian Dykstra as Lord Capulet is the patriarch of this Juliet, and he lends him an eerie combination of wise counselor and brute authoritarian.  His scene with the head-strong Tybalt, played with grit by Rex Daugherty, captures the character’s head of household role.  Later, in the scene with his female charges, we experience the full fury of his wrath. When he comes to the audience to defend his actions, we are left shuddering at the terror that we (through him) inflict upon one another.

Rounding out the excellent cast are Eric Hissom as the earnest but ineffectual Friar Lawrence, Joe Malton as the clueless Paris, Allen McCullough as Romeo’s father, Lord Montague, Matthew McGee as Friar John and others, and Michele Osherow as Lady Montague.

Aaron Posner’s direction is spot-on, and his use of transitions that bleed the following scene into its predecessor works wonderfully, not only keeping the action moving but also helping to emphasize the interrelatedness of actions and characters to the final outcome of the story.  And ghosts have never felt so real. 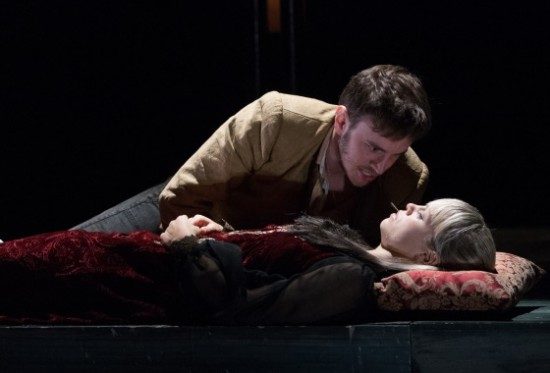 Michael Goldsmith as Romeo and Erin Weaver as Juliet. Photo by Teresa Wood.

A special nod must be given to Casey Dean Kaleba for his fight direction.  It was a smack heard round the theatre.

Shakespeare remains America’s most popular playwright.  I dare say that popularity rests firmly on his gift for language and, hence, its emphasis in most productions of the Bard, clever directorial concepts notwithstanding.

Folger’s “story first” production of “Romeo and Juliet” and its nod toward modernity in style and theme puts Shakespeare’s linguistic talents in their proper perspective.  The tale that emerges might not have been what the Bard imagined, or what professors at university preach, but it is most definitely an approach that gives contemporary significance to the script. And that significance is a resounding yes!

Make sure you see Romeo & Juliet aka. Juliet.  It will be worth the effort.

Running Time: 2 hours and 30 minutes with a 15 minute intermission.