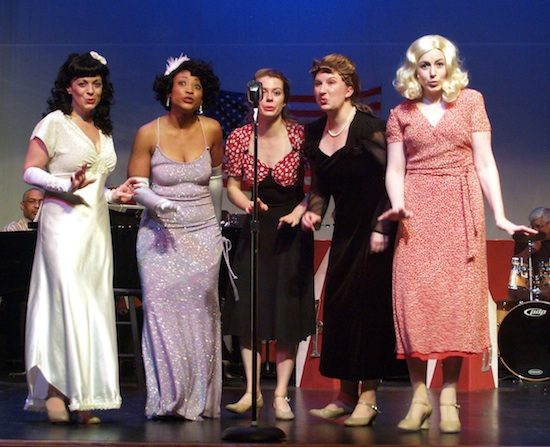 Silhouette Stages at Slayton House Theater goes back in time before radio became television, to the inner workings of The 1940’s Radio Hour. It’s December 21, 1942, on a snowy night in New York City. Clifton A. Feddington and his partner Sal Lebowitz have been producing The Mutual Manhattan Variety Cavalcade for six years, one year with WOV Radio. A show within a show, this production is directed by Lisa Ellis and Alex Porter, musical director Chris Bagley, and choreography by Tina DeSimone.

The 1940’s Radio Hour opens with Pops Bailey played by Robert Hoke in the role of phone operator for the radio station. On the side, he’s a bookie using the station’s pay phone to take bets. He is the elderly character that is adored by the other characters and when he partakes in ensemble numbers, he’s a delight to watch.

All in all, it is fun, funny and fanciful.

Stanley, the station’s booth technician and handy-man, is played by Chuck Bagley. This character is quiet but Bagley demonstrates that Stanley takes pride in his work as he supports the production of the radio show and announcer Clifton A. Feddington played by Patrick Mason.

Mason truly has an announcer’s voice. From the crass commercial announcements to managing the performers plus singing and dancing himself, Clifton A. Feddington is hilarious. He’s a combination of cute, annoying, and geeky all rolled into one.

Lou Cohn played by John Sheldon is the special effects technician for the radio show. He is also somewhat of a choreographer, showing Ginger (Mary Guay Kramer) how to shimmy and shake. Sheldon’s character adds to the comic relief of the radio show and this production.

Wally Fergusson, the delivery boy, is played by Jesse Kinstler with great enthusiasm. More eager to be a star as opposed to radio performer, Kinstler hits all the right notes especially when he accompanies Ginger and Connie singing “Boogie Woogie Bugle Boy.” Add in a little jitterbug and this number is a real treat. 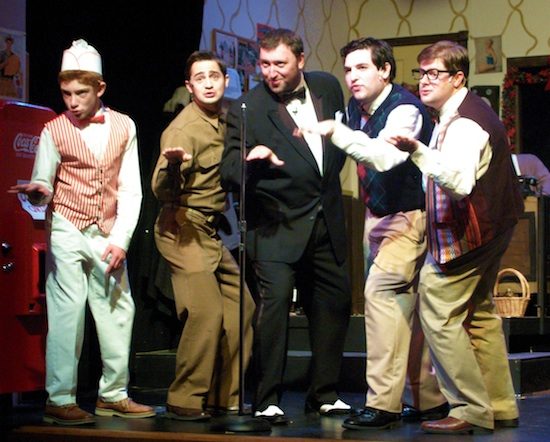 Johnny Cantone is the martini-swirling, cigarette-smoking rat-pack wannabe portrayed by James Gross. He is a crooner in every sense; hitting notes that make the gals swoon. He references to Sinatra and is quite the womanizer but his “history” with Ann Collier played by Kelly Rardon is quite apparent. Rardon’s character is demur and quiet but when she steps of to the microphone, her voice will melt your heart, especially when she sings “Have Yourself a Merry Little Christmas.”

Ginger Brooks played by Mary Guay Kramer is opposite in character. She is stunningly sensuous and cleverly flaunts her assets. She is outstanding in “Blues in the Night” with the men’s chorus.

Geneva Lee Browne played by Samantha McEwen stands out as the sultry blues singer in the number “I Got it Bad.” She is quick-witted and confident and has fun with the other gals (Connie, Ginger, Dee Dee, and Ann) in the Chiquita Banana commercial.

The platinum blonde, Connie Miller played by Emily Biondi, portrays this character as a fun combination Cyndi Lauper with a hint of Marilyn Monroe. “Daddy” is a snappy tune with the men’s chorus and portions are sung in pig-Latin. Too funny!

Dee Dee Lewis played by Kelly Danforth offers her vocal talents to the commercials and WOV Call Sign. Her solo with the men’s chorus, “Five O’clock Whistle” is a dandy number that will have the audience snapping their fingers and tapping their toes.

B.J. Gibson played by Vince Vuono duets with Connie (Emily Biondi) in the number “How About You.” In Act II, Johnny is too intoxicated to perform and just intoxicated enough to make a big announcement. The announcement involves B.J. and that’s when he steps up to perform his solo, “You Go To My Head.” It’s a sweet number with a pleasant sound. 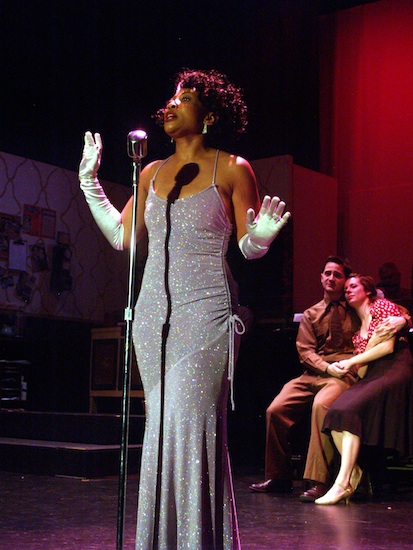 Biff Baker is the soldier shipping out that is played by David Tiernan. “Ain’t She Sweet” is a big band classic and Tiernan delivers it in style with the chorus.

Neal Tilden played by David Hill is the nerd in the crowd donning his horn-rimmed glasses and argyle sweater vest. This character is part of the commercial chorus and WOV Call Sign. His solo “Blue Moon” begins with a dedication to Mrs. Tilden – his mother. Another classic, performed with a hint of humor, it will tickle the audience’s funny bone.

The costumes are true the period of which the gal’s dresses are comprised of satin, silk, or chiffon. Some of their winter coats were trimmed with fur, accompanied by a stylish hat. Most of the guys were dressed in trousers with long sleeve shirts and vests or were dressed to the nines in a fancy suit.

The set was design to represent a radio station in the 1940’s. The main entrance was up stage right where Pops desk and phones were. Downstage along the same sight line is an authentic coke machine. The Zoot Orchestra was center stage and stage left is the sound booth for the radio station. Song and dance numbers are performed in front of the orchestra. The Christmas tree and decorations were a nice touch.

The 1940s Radio Hour is just that, a glimpse into the successful operations of a radio show on a snowy winter night. It is not fraught with the character’s personal drama, though there is some drama in relation to the production of the radio show itself. Silhouette Stages production depicts the need for good, valuable family entertainment in challenging times (World War II). All in all, it is fun, funny and fanciful.

Running Time:  Approximately a two hours with a 15-minute intermission.

The 1940s Radio Hour runs through November 3, 2013. Tickets are on sale at https://silhouettestages.com/.