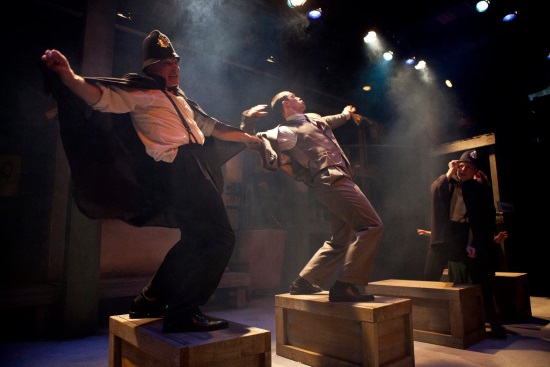 The premiere production of NextStop Theatre unveiled this past weekend, with the uproariously enjoyable sendup, The 39 Steps. NextStop is the new incarnation of Elden Street Players, a bastion of quality theatre that has reorganized and taken the plunge into professional theatre—making them the first of its type in the Herndon-Dulles corridor of Virginia.

The choice of their inaugural show is apropos. First, it is simply a blast! It is fast-paced, engaging, (though not to be overthought)—and puts on display all that can be done in a group with a load of talent, continued artistic and technical determination, and just enough stage for the show.

The 39 Steps is based on the Hitchcock movie of the same name. Faithfully following the plot, it has been made into a fast-paced romp, in the true British farce tradition, from which it was authored and debuted on the London stage. Adapted by British comedian and playwright Patrick Barlow in 2005, the play then came across the pond and to Broadway in 2008, winning two Tony Awards. In Hitchcock’s world, an everyman is thrust into bizarre and challenging circumstances and left to his own devices to sort out the truth behind the intrigue. His 1935 movie provides all the needed elements – intrigue, twists and turns galore, varying locales and contrasts of classes, people on the lam, and of course, a burgeoning love between a twosome that are unexpectedly thrown together.  The usual…. 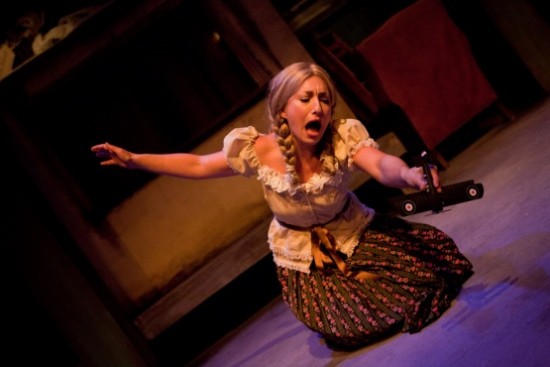 Here we have our hero, the dashing leading man Richard Hannay, played by James Finley. Exhibiting resourceful derring-do, he finds himself entangled with a femme fatale who becomes fatal. Young talent Finley, as the only one to stay in one role, is a steady force for righteousness throughout, with a nice stiff upper lip British accent. His sense of whimsy and less is more works well with the outlandish cast. The female roles, notably the ingénue, are played by Emily Levey, another local area actor. Her creativity and different accents made her a treat to watch.

The challenge and  subsequent thrill of a “romp” (unofficial genre creation) is to handle the speed of the material yet not overlook the great details that can bring the house down. Case in point is Levey, done in by an assassin with a knife, lies splayed on top of a sitting Finley in a chair. He indelicately decides to slide down as to not disturb the body, and contorting himself in snakelike fashion. He then uses the knife as a lever to release the map from her hand. Great stuff.

Filling out the cast are Evan Crump and Nick Rose doing the character role heavy lifting. Whimsically listed as clown 1 and clown 2, they combine in a frenzied series of parts, often playing different characters in the same scene. ­­­­ 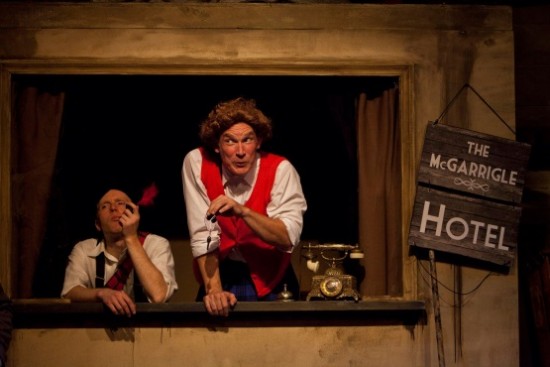 Evan Crump as Clown 2 and Nick Rose as Clown 1. Photo by Rebekah Purcell.

Crump, recently off his role as the medium Mme. Arcoti in Blithe Spirit, ‘channels’ his inner femme nicely again here. His is a nuanced performance that blends ever so well with his counterpart. Rose, one of the members of ESP from its inception, tackles the bombastic characters with a booming voice and over the top accents.  The famous train escape scene is a sound and sight wonder, with silhouettes, majestic chase music, and guffaws. Great chemistry in this cardio show, as actors scurry around to set up and break up their minimalist set.

Director Evan Hoffman has constructed a finely paced production that, under the pressure of premiere night, came through swimmingly as they say.

Scenic Design by James Villarubia as a well placed romper room, with most of the props—maybe their whole warehouse on display onstage, simulating an MGM backstage storage. A second level was put to good use as all spaces were utilized for many scenes in England, Scotland, and interiors.

Hoffman and Susan d. Garvey’s production team (Stan Harris, Sound, and Kevin Laughon, Props, amongst others) were on mark even though there were lighting challenges and unavoidable glitches in a show of this pace.

Hitchcock sightings were on the rise, also. Not the master himself, who had a penchant for sneaking  himself in his movies. This was for references to other Hitchcock films, notably ‘Rear Window’, ‘Vertigo’ and ‘Psycho’ …by situation or by music.

Great show out of the gate, showing that cheeky minimalist style of the brits and brings back an era of seat of your pants theatre–grabbing a piece of a prop and creating a moment. No time to think about it, on to the next thing. I wouldn’t miss it.

The 39 Steps is presented by the NextStop Theatre Company (previously Elden Street Players) at 269 Sunset Park Drive,  Herndon VA, from September 28 to October 20, 2013. For tickets to this or other performances in the 2013 season, call the information line at (703) 481-5930 or contact www.NextStopTheatre.org.