Theatre Review: ‘The 39 Steps’ at The Little Theatre of Alexandria 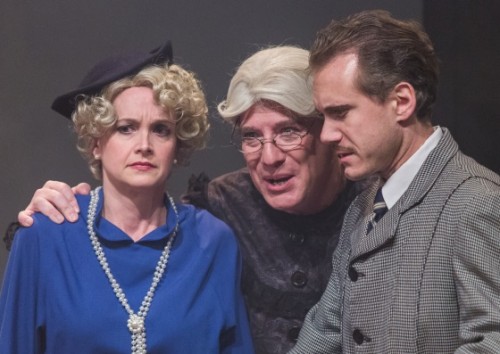 John Buchan’s 1915 novella The 39 Steps hasn’t survived so long because it’s a great story. In fact, it might have lasted precisely because it’s not. The thread of the plot is so thin, but the proto-Bond exploits so entertaining, that this “shocker”–as Buchan called the genre–has lent itself to liberal adaptation and eventually parody.

… the audience was left light and happy

For his 1935 film of the same name, for instance, master of suspense Alfred Hitchcock not only transformed the victim—whom our hero Richard Hannay is falsely accused of murdering—into a secret agent woman, but he also introduced a reluctant female companion who almost gets Hannay nabbed while he’s on the lam. It’s Hitchcock’s version of the story (and an interim one, too) that playwright Patrick Barlow re-invented as parody in 2005, with just four actors playing dozens of roles.

Now, director (and set designer) Chris Evans Kirk brings Barlow’s spoof to the Little Theatre of Alexandria. The two-act performance (50 minutes each, with a 15-minute intermission) ambitiously takes the audience on a wild ride from rainy London to the Scottish moors and back, at times going a little off the rails. 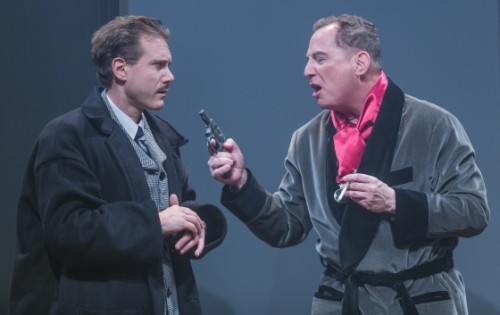 Hannay, played by Jeff McDermott, gets himself into his mess by allowing Annabella Schmidt, one of Elizabeth Keith’s three personas, to invite herself back to his London flat after the theater. Looking not for love but for protection and a bite to eat, Schmidt mysteriously ends up stabbed in the back. Hannay, realizing he’s next, steals away in a milkman’s uniform and heads north to Scotland to find the man behind the killing. He spends the rest of play on the run from the cops and hit men.

Along his way, hilarious episodes with “everyone else”—passengers in the train car, constables, railroad engineers, and a farmer and his wife, among dozens of others played hilariously by Bob Cohen and Erik Harrison—colored the plot as they led the audience on their own journey marked not by places but personalities. Verbal and visual references to other Hitchcock movies, mid-scene costume changes, and direct address of the house when re-setting props brought the audience in on the jokes. “Aw, c’mon. I don’t get paid enough for this,” Harrison mumbles, after doing a sleight-of-hand trick that didn’t generate immediate applause. On cue, we all hooted and clapped.

McDermott is the only actor of the four who plays just one role, and thus provides the strongest thread stringing together so many scenes, as he’s pursued from town to town, through parades and impromptu political speeches. In the second act, he’s aided by a very reluctant—she’s handcuffed to Hannay by those hit men—companion, Pamela, also played by Keith. The pair’s witty repartee and sight gags push the story to the end, back at the theater, where Hannay miraculously exposes the meaning of the 39 steps. 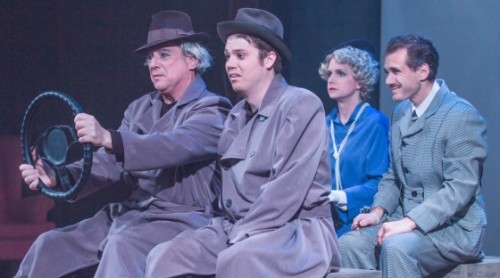 Even without a set change, the set design created energy to match the production’s fast pace. A keystone screen above the action projected black-and-white stills indicating the current location. A shadowbox below used silhouettes to create Hitchcockian transitions. Theater boxes at stage right and left let the audience get the reverse angle when Hannay is at the theater taking in the wonders of the magnificent Mr. Memory, a savant who ultimately holds the key to the meaning of the 39 steps.

Simulated motion of planes, trains, and cars added other amusing notes. When Hannay and Pamela are being taken to the police station, for instance, the passengers and their two drivers heave and sway along with the turns in the road until they’re stopped short by a flock of sheep.

Much like the car trip, Little Theatre’s 39 Steps whipped the audience to and fro, between laugh-out-loud curves and stiffer straightaways. In the end, the audience was left light and happy, content to let the sideshows become the main event.

Running Time: One hour and 55 minutes including an intermission.