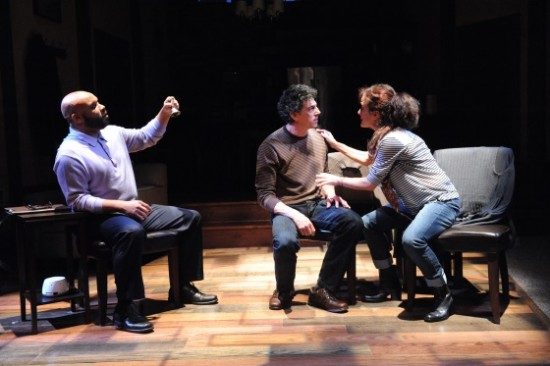 Abortion is not an issue that is often discussed in rational terms. The debate has become so couched in rhetoric and passion that it might as well not be happening at all, but Theater J’s remounting of Alexandra Gersten-Vassilaros’ 2005 play The Argument attempts to cut through this fog and present the terms of the debate through a strictly human lens. Despite some uneven directorial choices, they have succeeded admirably in this monumental task.

The Argument concerns the late in life romance of forty-somethings Sophie (Susan Rome) and Phillip (James Whalen) and how it is impacted by a sudden unplanned pregnancy. The chemistry between Rome and Whalen shines above all else. From their very first scene (a whirlwind sexual encounter), their skill as a pair and their ability to play off of one another makes their not quite storybook romance feel heartfelt and believable. This is especially important given that it provides a solid emotional base to show the cracks developing after Sophie learns she is pregnant.

This emotional base has ample room to play due to scenic designer Robbie Hayes’ detailed yet restrained design. Phillip’s upscale apartment feels just as real as the lovers that inhabit it without being too aggressively meticulous. The crowning technical achievement goes to projection on his windows depicting a bustling city during the scene changes. It is a supremely clever conceit in a show about the intimate portrayal of a too often coldly politicized issue: we are constantly reminded of the presence of the outside world as Phillip and Sophie struggle in their self-contained personal one onstage.

And struggle they do.  True to the title, most of the play after this point is composed of the couple arguing about how to react to the situation. Phillip wants to be a father, Sophie wants to continue living her life, and the discussion plays out in fairly predictable terms. Still, Theater J and director Shirley Serotsky must be commended for not falling into the common traps of preaching or taking sides. The characters make the argument themselves, and each have their own valid points and grievances. The audience is invited not to pick sides but to empathize with Phillip and Sophie as human beings, and we see intimately the potential impacts of both sides of the impossible choice. Keeping this neutral tone is a prodigious accomplishment in a play about arguably the most contentious issue that exists today. 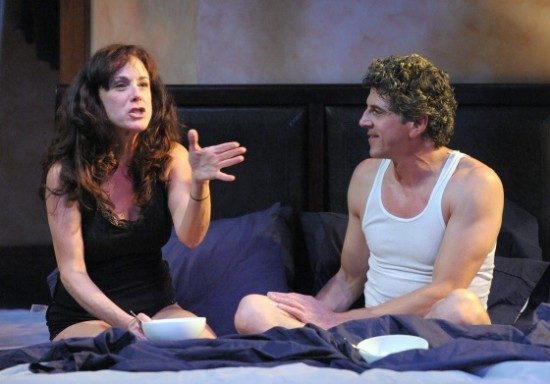 Unfortunately, the show is dragged down by another pitfall that easily could have been avoided: it is too funny. Buoyed by the effortless chemistry of Rome and Whalen, the first couple of scenes that establish their romance are screamingly funny. The audience connects with Sophie and Phillip because they are each so uniquely quirky and awkward, and the laughs serve only to strengthen their relationship. As the play progresses and the subject matter takes a darker turn, however, the laughs don’t diminish in frequency or intensity to match. Phillip and Sophie’s marriage counselor (played with great energy by Jefferson A. Russell) becomes no more than a comic set piece, and Phillip’s attempts to physically restrain Sophie from going to the doctor come off as slapstick gags rather than the sad and desperate actions they are. These moments create an inconsistency in tone that robs a good portion of the latter half of the show of its emotional resonance. When they are discarded, the strength of the script and of the actors is allowed to shine through, but they are not discarded quite frequently enough.

This deficiency is not enough to derail the production entirely, as Rome and Whalen’s performances keep things afloat and the subject matter is replete with enough drama to mostly skirt the misplaced comedy. Theater J should be commended for tackling such a difficult subject with such frank honesty. As Theater J Artistic Director Ari Roth notes in the program notes, what better play to do in an environment where the government shut down for 16 days due to an inability to compromise than one about an issue where compromise is rarely even discussed?

The Argument  runs from October 23rd to November 24th at Theater J at 16th and Q street in Dupont Circle, Washington, DC.  For tickets, click here.