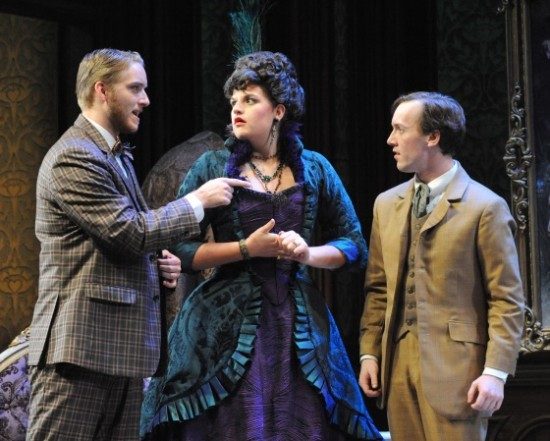 Thornton Wilder’s The Matchmaker originally started life as a Broadway play in 1955 with veteran actress Ruth Gordon and later was made into a successful film starring another veteran from the stage Shirley Booth. It is the story of a widow who is determined that her life can continue by marrying a rich businessman from Yonkers NY. If this sounds familiar, it is because The Matchmaker is the source material for the hit musical Hello Dolly. The musical is done way more often than the original play, so I was interested to see the production at UMD that plays through tomorrow. As directed by Shakespeare Theatre Company’s Associate Director Alan Paul, the production has a good look but lacked somewhat in excitement or energy.

It was interesting to me, knowing the musical so well, at the differences in the original play. First off, I was surprised that the character of Dolly Gallagher Levi has much less stage time than she does in the musical, even though she is the main character. The play focuses more on Horace Vandergelder and the other characters, such as Mrs. Irene Molloy, Cornelius Hackl, Barnaby Tucker, Ambroase Kemper and Ermengarde. The plot point of Vandergelder not being pleased with Ermengarde marrying Kemper is a major plot point in the play, where it is incidental in the musical. Then there are characters that don’t exist in the play at all such as Malachi Stack who comes to work for Vandergelder in his hay and feed store.

Ok, that is your Wilder history lesson, so now I would like to discuss the performances. 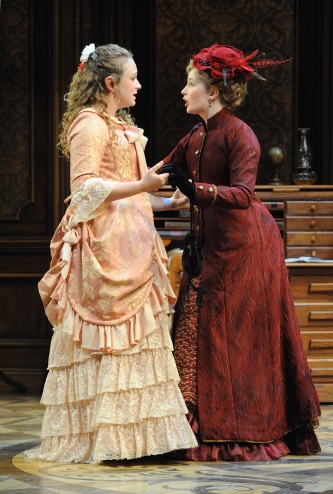 I’ll start with the iconic role of the matchmaker herself Mrs. Dolly Gallagher Levi played by Riley Bartlebaugh. I thought she had a good presence onstage and did have the persuasive quality that the character should have. I very much enjoyed Julia Klavans as Mrs. Irene Molloy, the woman who is getting tired of her millinery business and is looking for something better. The character in the play has plenty of backbone, and Klavans takes matters into her own hands in the scene at the ritzy Harmonia Gardens when she secures the perfect table for herself, her assistant Minnie Fay (played by Margaret Bartolomeo), Cornelius, and Barnaby.

The comic timing of assistant store clerk Barnaby Tucker, as played by Aidan Walsh, was the most energetic of all of the performances. Walsh has great comic timing and the makings of a strong performing career. I also enjoyed the performance of Thomas Beheler, as the chief store clerk Cornelius Hackl. Walsh and Beheler make a great team and you root for them all the way through the play to meet and kiss the girl they have been waiting for.

Martin Thompson plays the role of the widower and successful businessman Horace Vandergelder. His performance comes off of being a bit stiff rather than belligerent; and, where most of the performers portrayed older very naturally, Thompson’s performance looked more like a guy trying to play old.

… a lot of talent

Ultimately, when you have a cast of college performers, it’s up to the director to get the energy factor into his or her show: except for a few spots Alan Paul did not achieve this goal. The pacing in the first scene felt draggy and only picked up slightly as we went along. Even the scene in the Harmonia Gardens felt a bit lifeless, which is weird because there is a chase and other exciting things happening during that scene. 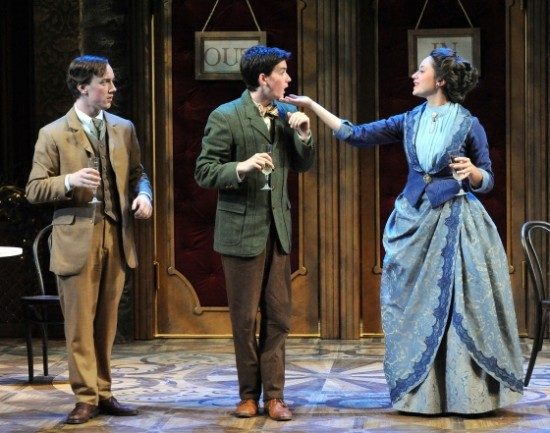 Physical elements are that of a professional production. Paige Hathaway’s unit set of Vandergelder’s store is cleverly transformed to all the other locales in the play. They include Mrs. Molloy’s hat shop and the Harmonia Gardens. When you have a working fly system you can achieve a lot by just flying in and out set pieces while keeping the basic set structure and Hathaway definitely makes use of the CSPAC’S top notch performance space in the Ina and Jack Kay Theatre.

Costumes by Aryna Petrashenko are perfect to play’s setting in the 1880s and are complimented by Anne Nesmith’s wigs.

Overall, UMD’s production of The Matchmaker is a mixed bag. There is a lot of talent, and it has attractive physical elements; but with Paul’s sometimes bland staging, this production is not necessarily a match made in heaven.

Running Time: Two Hours and 30 minutes including one intermission.

The Matchmaker plays through tomorrow October 19, 2013, in The Ina & Jack Kay Theatre at Clarice Smith Performing Arts Center at the University of Maryland – at the intersection of Stadium Drive and Route 193, in College Park, MD. For tickets, call (301) 405-ARTS (2787), or purchase them online.