Theatre Review: ‘The Sound of Music’ at Compass Rose Theater 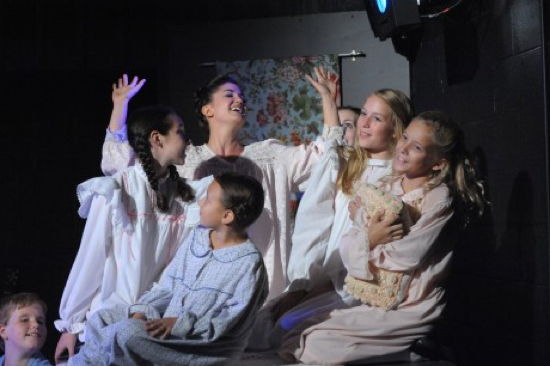 Katie Keyser as Maria with the von Trapp Children.
Photo by Stan Barouh.

The Sound of Music, currently in production at Compass Rose Theater in Annapolis, MD is still a timeless classic story of love. It explores the loving relationships of parent and child, man and woman, first love, husband and wife, and love of country and God.

It is evident that Katie Keyser is meant to play Maria. She is a joy to watch as she sings and dances with the children. Her eyes twinkle as she waltzes with Captain von Trapp but Keyser also shows Maria’s vulnerability as she contemplates her love for God and her love for Georg. She hits all the right notes and exudes pure entertainment in “Do-Re-Mi” with the von Trapp children. Keyser’s song styling’s blend perfectly in her duets that include “My Favorite Things” with Mother Abbess and in “Something Good” with the Captain – that leads to the confession of their love for each other.

Andre Softeland as Captain Georg von Trapp has an undeniable charm that romantic heroes are made of. He grapples with the loss of his wife and his relationship with his children as he rules with an iron fist. Enter Maria and slowly she peels away his austere character to reveal a softer side. As his relationship grows with Maria and improves with his children, he is then challenged by his love for Austria and his lack of love for Elsa portrayed by Jamie Odgen. Softeland captures all the emotion in his solo, “Edelweiss” (bring some tissue) and while there is obvious chemistry between Georg and Maria, it is their love that transcends all.

Compass Rose Theater may be a small but their production of ‘The Sound of Music’ is big.

Elsa Schraeder (Jamie Odgen) is the stunning Baroness that has her eye on Georg (Captain von Trapp) and visits with him and the children at the von Trapp mansion. Though her feelings may be genuine for him, she is quite the seductress. Odgen is the “fun” in the show. Along with being exquisite, she likes exquisite things – especially when she is dressed to the nines in her pale green ball gown. Odgen balances the fun with pal Max Detweiler played by Daniel Seifring who is the “folly”. These two offer the comic relief to such a seriously themed show. Their performance of “No Way to Stop It” is a toe-tapping treat. It is said that opposites attract and Elsa and Max could ultimately be the “perfect” couple.

Tomas Hessenauer as Franz, the Butler is the confidant to both Captain von Trapp and Maria. Like an executive assistant to a CEO, Franz is in the know at all times. Hessenauer is a pure gentleman in this role, always taking care of the von Trapp family.

Mariel White as Liesl is a rising star and her captivating voice is a winner. On the cusp of womanhood, a part of Liesl is ready to be loved yet White also manages to show Liesl’s naïve side. As Liesl experiences heartache when she learns the truth about Rolf and his loyalties there is a precious moment as she seeks comfort in her father’s arms.  Softeland and White again prove that love conquers all.

A.J. Whittenberger as Rolf may have feelings for Liesl but his convictions for the changing political landscape of Austria shrouds his love for her. While Rolf wants to help the von Trapp’s, his fear wins out when he blows the whistle on them. Their love ends up standing still in time. Whittenberger and White are a good match, fulfilling the roles of the “first love” characters. Their duet, “Sixteen Going on Seventeen” is dressed with innocence as they dance before the impending thunderstorm.

Daniel Starnes as Friedrich is a young boy learning what it means to become a young man. Starnes brings a level of maturity showing great respect for Maria and protectiveness for his siblings. Mallory Holson as Louisa and Annabelle Cotton as Curt are the quiet characters in this production. In the ensemble numbers like “Do-Re-Mi” and “So Long, Farewell” they lend their voices with enthusiasm that makes each song a hit.

Madelyn Schloss plays the precocious Brigitta who is very wise for a nine year old. Still the little girl, she buries her nose in a book and yet is quite aware of what is happening around her. Her interaction with Maria and her siblings is sweet and she is definitely the character that believes in happily ever after.

Sarah Grace Clifton as Marta is as adorable as her curly blonde locks. This is the girly girl character that is eager to celebrate her 7th birthday with the hopes of getting a pink parasol. Pink being her favorite color is how she and Maria connect. It is fun to watch Clifton skip around the stage and she adds to the dynamic chemistry of the sibling cast.

Sophia Nasreen Riazi-Sekowki as Gretl adds to the adorable factor. The youngest of the von Trapp children, she is surrounded by adult issues (death of her mother, war, love) that would perplex any five year old. It is Maria’s and eventually her father’s comfort and protectiveness that ease this little girl’s fear, allowing her to be a little girl, if just for awhile.

Will Cooke as Herr Zeller is the character you want to hate but not quite. Cooke’s character is doing his job and in some way he struggles with his obligation to the Third Reich just like Rolf. These are the characters that drive the conflict for Captain von Trapp. 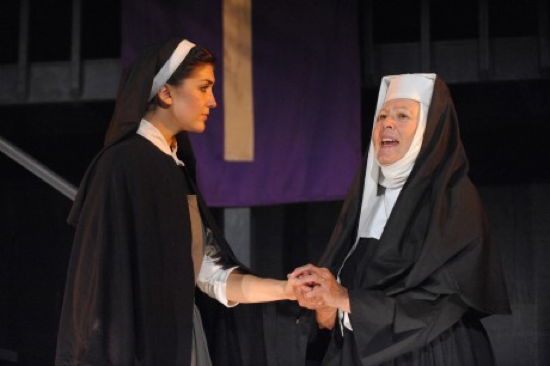 The wonderful surprise in this production is the Latin chants and religious music sung by Maggie Walker as Sister Berthe, Lynn Garretson as Sister Margaretta, Rebecca Dreyfuss as Sister Sophia and Jill Sharpe Compton as the Mother Abbess. All the sisters and Mother Superior like Maria but they don’t understand her as conveyed in the song “Maria” that asks the questions, “How do you solve a problem like Maria?” and “How do you hold a moon beam in your hand?” Such questions conjure images that makes one smile and appreciative of Maria’s zest for life. Compass Rose Theater’s production is just that – learning about life and love and what truly fills one’s heart.

Sound of Music is produced and directed by Lucinda Merry-Browne with Delany Pendry as student assistant director. Musical direction is by Anita O’Connor with accompanists are Erika Knepp and Yee-Nig Soong. The original Broadway production opened in 1959, starring Mary Martin and Theodore Bikel with music by Richard Rodgers and lyrics by Oscar Hammerstein II. It is based on the memoir by Maria von Trapp, The Story of the Trapp Family Singers.

Played out on a simple set designed by Joe Powell, there is a stair case that leads to a landing and a balcony that is well used by the cast. This is attributed to choreographers Justin Cerne and Jamie Odgen. Additional set credits go to Judy Nevins, Jo Ann and Mike Gidos who also were in charge of props. Max Dolittle’s lighting design assists with such scene locations as the Abbey, the interior or exterior of the von Trapp mansion and the concert hall stage.

The costumes were designed by Julie Bays are relative to the time period. Costumes include the children’s sailor outfits, their play clothes Maria makes from her former drapery, and the stunning lace and satin dresses for the girl’s at the von Trapp ball and handsome suits for the boys. Maria’s ugliest dress is worth mentioning too. Throughout the show, Maria’s clothing progresses from silly young woman to the matured Mrs. Maria von Trapp.  Elsa’s elegant wardrobe accentuates her gorgeous figure and her expensive taste that includes diamonds and furs. Captain von Trapp, Max and Her Zeller don suits that compliment each character.

Compass Rose Theater may be a small but their production of The Sound of Music is big. It offers a broad-spectrum of emotion, talent, and entertainment. It is a musical extravaganza to be enjoyed by elementary school aged children to great-grandparents and everyone in between.

Running Time:  Two and one half hours with one 15-minute intermission.