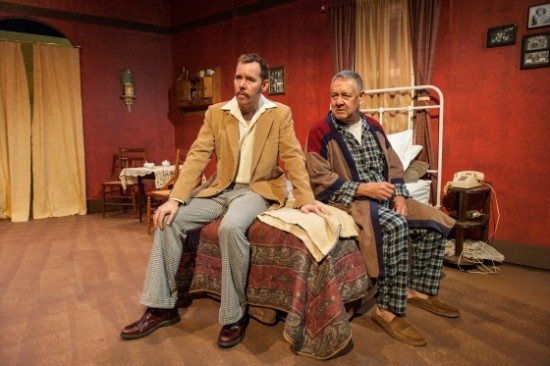 The age of vaudeville is one that left an indelible mark on the world of comedy, and as such has generated its fair share of send-ups and homages. One of the most successful of these is Neil Simon’s 1972 play The Sunshine Boys, and in their production of the show, Keegan Theatre is able to adeptly capture the vaudeville spirit so integral to Simon’s love letter.

…real vaudeville comedians … would be proud to see them [Keegan] stoke the genre’s flame just a little bit more.

The Sunshine Boys tells the story of the aging vaudeville star Willie Clark and his nephew Ben Silverman’s attempt to reunite him with his long estranged and long despised partner Al Lewis for one last show. Appropriately enough, the script reads like a vaudeville show itself with a constant deluge of one liners, corny jokes, and over the top physical gags. The demands on the principal actors are daunting, and Kevin Adams and Timothy H. Lynch are up to the challenge. They wear their lines with the effortless familiarity required of a vaudeville star, moving with the ebb and flow of the obvious jokes and taking some time to accentuate the little moments that would fall flat if not given the careful attention the principals afford them. At the point in the show where the pair actually performs one of their vaudeville sketches, the transition is barely noticeable. 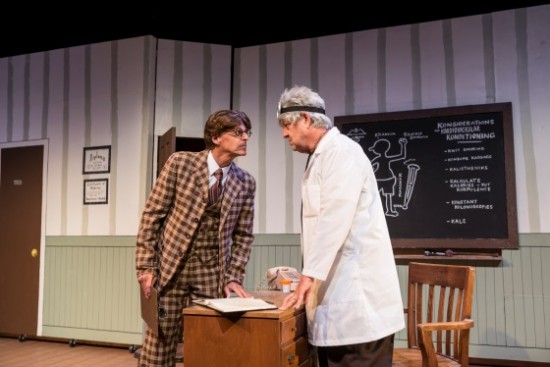 Unfortunately, this skillful aping of a classic vaudeville pair does mean that some of the other players get somewhat left behind. Peter Finnegan and Kecia Campbell both manage reasonable performances respectively as the exasperated nephew Adams’ perpetually oppositional uncle and registered nurse assigned to him, but the scenes with the two of them feel rough and lethargic compared to the mesmerizing back and forth of Lewis and Clark. It is not necessarily the fault of the other players, and they all ably provide what they need to provide to move the plot forward, but the (relatively scarce) moments without Lewis and Clark onstage together often feel like so much window dressing leading up to their inevitable meetings.

Still, none of this is quite enough to detract from the distinctive world created by Keegan. Perhaps by necessity of being a relatively hole-in-the-wall theatre and needing to use every last bit of space to the fullest, this world building is something they have always excelled at. The relatively bare but carefully detailed set by George and Eric Lucus depicts Clark’s apartment to start with and shifts briefly to the TV set where the pair are rehearsing their famous “doctor sketch”. In both instances, the attention to detail is admirable, featuring touches like pictures from the pair’s glory days and half-eaten sandwiches to accentuate Clark’s mental state and a skeleton on a chalkboard diagrammed with letters starting with K after Clark referenced how funny a letter it is nearly an hour before. This combined with the competent sound design by Dan Dieter and clever house music (“Who’s on First?” plays during intermission) do a great deal to draw the audience out of Keegan’s tiny brick space and in to the world of the play.

The Sunshine Boys is a production director Michael Innocenti should be proud of. The number of people who remember the glory days of vaudeville has likely shrunk a great deal over the past few decades, and mounting a production of an affectionate homage to the genre is a tricky proposition in light of that fact. Innocenti remembered the first rule of comedy, though: it needs to be funny first. In his hands, Lynch and Adams are certainly that, and the real vaudeville comedians they are based on would be proud to see them stoke the genre’s flame just a little bit more.

The Sunshine Boys runs through October 19th at the Keegan Theatre, located on Church and 17th in Dupont Circle. For tickets click here.