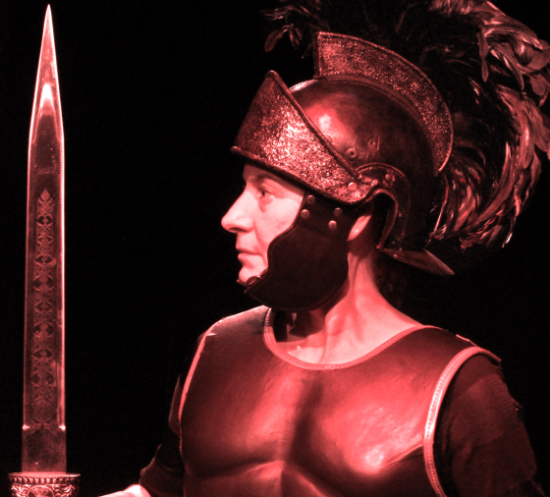 Perhaps it is the absence of testosterone that makes this Titus so clear and cool headed in the face of doom.  Or maybe it is the intimacy of the Capital Hill Arts Workshop space, as we sit but inches from the gore each knife thrust spews (red fabric actually) that allows us to calmly watch the extermination of a family or two.  Then again, it might be the lack of frills and spectacle in this most spectacular of Hollywood-style Shakespearean dramas that keeps the story not that gore center stage.

Whatever it is, this Titus Andronicus will leave you pondering just how long our cycles of violence will continue; for despite all attempts that the script or the production make to villainize the conquered and valorize the noble Romans, in the end these warriors of whatever hue or national origin share in a ritualized lust for slaughter than cannot be appeased by vain attempts at courtesy or the welcoming hug or tear.

Though I have seen this earliest of tragedies several times, from the Shakespeare Theatre Company’s 2007 version to the famed Julie Taymor movie, this production filled me with a renewed respect for this generally ignored script.  Though its poetry will never equal that of Lear or Hamlet or Macbeth, its narrative and dramaturgical significance resonates resoundingly in the 21st century, as we wrestle with cycles of t*t-for-tat terror here and abroad.

The victorious, noble Titus Andronicus returns home to Rome only to find his Emperor dead and a fierce succession fight between his two princes, Saturninus and Bassianus.  With him, Titus brings the spoils of war, the Goth Queen Tamora, her three sons, and her slave—and secret lover—Aaron.

…one could not ask for a more articulate, cold-blooded production of the macabre.

Despite Tamora’s pleas for mercy, Titus—forever the religious traditionalist—sacrifices her eldest son to the god of the Romans.  As Titus’s sons bring in the blood and disemboweled organs of Tamora’s son, one clearly perceives the future.  Horror stricken, Tamora and her remaining family have revenge in their hearts if not their eyes.

Soon after, Titus’s brother, Marcus, proclaims Titus the people’s choice for Emperor, but he demurs.  When asked to pick a successor, he chooses Saturninus.

Saturninus’s first act, however, is to claim the betrothed of his brother Bassianus, which of course causes the betrothed, Lavinia, daughter of Titus, to run off with her beloved, which in turn causes Titus—forever the loyal subject–to demand her return to Saturninus.  When Titus does not get his way, he kills one of his own sons, and shows no sign of regret.

Meanwhile Saturnus, not be denied a bride, chooses Tamora, Queen of the Goths, who is of course old enough to be his mother.  Now Empress of Rome, Tamora is in the perfect position to reap the revenge we know is in her heart. 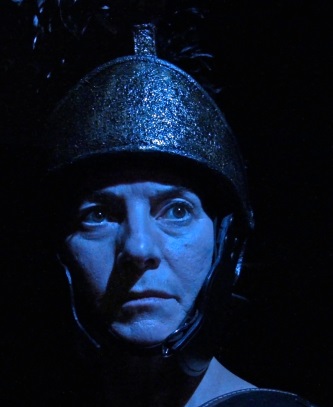 Leading the twelve-person female ensemble is Isabelle Anderson.  Her Titus is a study in nobility and control.  Despite the horror going on around him, her Titus never seems to be truly flustered or inconsolable–ironically so.  One might want, as I sometimes did, for Titus to show signs of losing control or to be grief stricken to the point of wails; but no, this Titus remains ritualistic in his killing and in his suffering, whether butchering his own kin or the Queen mother and sons who led the destruction of his clan.

Although the entire cast turned in strong performances, several stand out; in fact, those sons, Chiron and Demetrius as portrayed by Amanda Forstrom and Teresa Spencer, are among the best.  The women seemed to be channeling two raucous punksters, their youthful hormones all astir.  Forstrom in particular captures that Clockwork Orange merrymaker too easily swayed into demonic cruelty.  Their murder of Bassianus and subsequent rape of Lavinia is by far the scene most emotionally difficult to watch.

Besides the title character Titus, Lavinia has by far the most demanding emotional journey of the play.  Rana Kay does a fabulous job portraying both the character’s innocence and her snobbery.  Then, after her rape and mutilation, she rises once again to the occasion to give us the shell shocked and helpless.

One of the most thoroughly engaging performances is turned in by Tiernan Madorno.  Her Aaron is as cold blooded as he is filled with an unrelenting rage.  That paradoxical combination gives the character an historical demeanor, as if his life time of enslavement has metastasized, transforming his humanity into a ruthlessness rooted in the destruction of all his oppressors.

One of the strangest characters in the play is performed by Tia Shearer.  Her Saturninus wavers between the farcical and the pathetic.  At times he looks all the boy spastically in over his head as Emperor, while at other times he seems the determined young leader, albeit with a mother complex.

Rounding out the superb cast is Jenna Berk as a well grounded and fierce Lucius, Aaryn Kopp as the noble, high-minded Bassianus, Sara Waisenen as the cunning Tamora, Ester Williamson as the Creon-like Marcus, Hannah Burkhauser as the bouncy young Lucius, and Angela Pirko as the Soldier.

Director Lise Bruneau does a fine job keeping the production focused on the story, allowing it to unfold with histrionics, which may at times might seem necessary but given the hyperbole of the violence and the intimacy of the space could have proven to be too much for any audience to endure.

She and her production team—Set Design (Jessica Moretti and Katie Dill), Lights (Brittany Diliberto), Costumes (Kimberly Parkman), and Sound (Palmer Hefferan)—create a poor theatre aesthetic that not only serves the production well but keeps the scenes and their necessities moving fluidly throughout.

With this production Director Bruneau seems to be asking: will the violence ever stop?  Will innocence ever go unbrutalized?  Or has the violence become ritualized in our culture, to the point where we sacrifice our humanity out of habit.

When Titus turns to the Emperor near the plays end and asks:

“Was it well done of rash Virginius
To slay his daughter with his own right hand,
Because she was enforced, stain’d, and deflower’d?”

To which Saturninus responds yes adding,

“Because the girl should not survive her shame,
And by her presence still renew his sorrows.”

When Titus then murders Lavinia, we are not shocked or appalled.  Rather such cruelty has become the very essence of this Roman culture where violence and religious sacrifice are as ingrained as misogyny and slavery.

We can only hope that somewhere down the line the cycle is disrupted and our common humanity is allowed to flourish.