Death is mysterious. But according to Flying V Theatre, your soul, whether it ends up in heaven or hell, is in for a pretty hallucinatory eternity. In the company’s new double feature, Unplugged, two otherworldly plays inventively explore the afterlives of some of the country’s most notorious and troubled musicians.

In playwright Hunter Styles’ cerebral, All Apologies, a group of fallen rock stars roam a special pre-heaven as they come to terms with their tragic deaths.  The souls of Janis Joplin (Katie Jeffries), Jimi Hendrix (David Samuel) and Jim Morrison (Christopher Herring) – all members of the infamous ’27 Club’ – navigate a YMCA-esque campsite, all the while waxing poetic about love, dying, and their tormented past selves. God, in the form of a khaki shorts wearing brunette known as the Counselor (Alice Gibson), recruits said rock stars to initiate the latest arrival, Nirvana front man Kurt Cobain (Josh Adams). New to the afterlife, the sorrow ridden Cobain is a reluctant and snarky inductee more interested in brooding alone than playing nice with the other dead icons. But upon the arrival of Erica (Sarah Laughland), an almost famous singer and Nirvana devotee, cracks form in Cobain’s fortress of a wall, the possibility of inner peace and salvation within arm’s reach… if only he’d grab it.

All Apologies is a modern exploration of personal choice and consequence; the philosophical banter reminiscent of the kinds of conversations hipster college students enjoy with their cool young professors. Styles’ dialogue is deft and intelligent with Cobain and appropriately God, aka the Counselor, scoring the funniest and most poignant moments of the show. For example, Cobain contemplates, “What if hell is something you’re born with?” A resonant question for sure. But of course there are plenty of other winning exchanges from which to choose, i.e., in ’27 Club’ purgatory, rock stars partake in drinking games like “Never Have I Ever,” God kind of plays favorites, and while Jimi Hendrix doesn’t remember much about his life on Earth, he can still sing a wicked rendition of “Purple Haze” before a glowing campfire (thanks to the velvety vocals of David Samuel).

Actually all of the musical performances reach beautifully emotional highs. Katie Jeffries captures the grit of Joplin’s, “Try (Just a Little Bit Harder).” Christopher Herring as Jim Morrison delivers a soulful performance of The Doors’ “Break on Through.”  Sarah Laughland’s stirring rendition of Nirvana’s “In Bloom” is mournful and brave while Josh Adam’s vocals manage to skillfully reflect the artist’s profound inner turmoil and angst. And about the Nirvana catalog… Styles very wisely keeps the “Smells Like Teen Spirit” worship to a tasteful and respectful minimum.

For the most part, the cast skillfully fills the gargantuan-sized shoes of the iconic characters they portray. They all certainly look the part, thanks to Costume Designer Brittany Graham. Donning tight leather pants and an always unbuttoned top, Christopher Herring as Jim Morrison, with testosterone in ample supply, doesn’t so much as converse with his comrades as proselytize to them. Katie Jeffries’ version of Janis Joplin is appropriately messy and hyperactive, although the latter trait wears a bit thin after the third or fourth manic, sleepless episode. Plaid pants wearing David Samuel is charming enough as Jimi Hendrix. His delivery is simple and matter of fact. He does the best he can with the mostly underdeveloped character. Sarah Laughland as Erica, dressed in fishnets and that classic Nirvana t-shirt, offers a humble and relatable performance as the story’s only non-iconic singer.

Though The Counselor is ironically a smaller written character, Alice Gibson’s portrayal (and Styles’ clever personification) deserve some recognition.  Gibson is a relaxed and matter of fact higher power – the type of God who’d rather mock your indiscretion than “smite thee” for it. Her delivery is unpretentious and her quizzical responses to life’s big questions are an amusing and refreshing addition to a story that talks a lot about suicide and drug overdoses.

While Styles’ reimagining of Kurt Cobain teeters dangerously on the side of spoiled brat versus ailing rock star, Josh Adams balances the character’s relentless sarcasm and deadpan humor with his very real anxiety, depression and fear. Adams, dressed in the plaid, tattered uniform of the grunge movement, ingeniously captures Cobain’s inner chaos during his frenzied back and forth interview with an imaginary reporter. Between the cynical jokes and fits of rage, Adams eventually allows a bit of softness and humanity to shine through; it’s slow-going, but satisfying in the end.

Overall, All Apologies is a heady, existential musing that celebrates 90’s punk star Kurt Cobain perhaps a wee bit at the expense of the play’s other three icons. Don’t get me wrong. It’s a good play and the MTV generation will absolutely dig it. It’s just… the Woodstock crowd might be miffed.

While Flying V Theatre bills All Apologies as a companion piece to playwright Seamus Sullivan’s, Me and the Devil Blues, the fifteen minute intermission isn’t preparation enough for the abruptly opposite production that is the latter play.  Quintessentially “fringe” Me and the Devil Blues is a trippy and experimental probe into the afterlife of fellow ’27 Club’ member, blues singer, Robert Johnson (David Samuel).

A bit of backstory for you. Legend has it that Johnson, who had a penchant for married women and hard living, learned to play the guitar by trading his soul in a “deal with the devil” shortly before his death in 1938. In Me and the Devil Blues, Johnson is reunited with the devil in hell, only the requisite fire and brimstone are replaced by a Late Night Talk Show set complete with a house band, German guitarists, and surprise guests.

The Devil (Kyle Encinas) is the show host (of course) condemning Johnson to an afterlife of unfinished blues hits and a broken hand that can no longer strum his beloved guitar. To further the nightmare, Johnson’s perpetual creative block runs on an excruciating loop, leaving the bad boy singer to struggle fruitlessly to finish the last verse to his song.Somewhere throughout this most macabre of Groundhog’s Days, the devil’s daughter Tamara (Katie Jeffries) shows up to speak her piece and lay it all on the line to both daddy and beau Johnson. 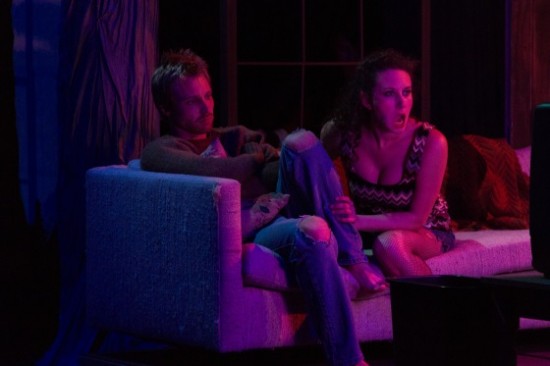 In between guitar riffs and commercial breaks, the devil and his minions entertain us with spotlight heavy monologues and soliloquies about the true nature of hell. Forget the pitchforks and 110 degree heat. Hell is long lines, frigid temperatures, and forgotten turn signals.

Me and the Devil Blues is a clever and campy satire, the strength of which rests in Sullivan’s caricatures and hyperbolic character arcs. For example, Tamara is not simply the Anti-Christ, she’s a leather jacket wearing, philanthropist, curator and Vassar graduate. Likewise, band mate Aaron Bliden (Robert Christopher Manzo), is more than just an unassuming background drummer. His evolution or perhaps unraveling (you decide) is comedic gold.

Here, both Jefferies and Samuel get to flex their comedic chops and flaunt their talents far more than in All Apologies and appear more delightfully cocksure in Act II of Unplugged. Kyle Encinas is dare I say loveable as the ever upbeat, Beelzebub. Robert Christopher Manzo is the play’s pleasant, yet disturbing surprise. Manzo fully commits to all facets of Bliden’s bizarre journey. The payoff is worthwhile.

While I don’t know that the contrasting themes of heaven and hell automatically qualify these plays as companion pieces, director Jason Schlafstein gives both their due. Each has the substance and entertainment value to exist without the other.  Both provide substantial endings and undoubtedly a surplus of both creative and technical talent. The set design by Andrew Berry and Joe Musumeci are top notch for example. But both All Apologies and Me and the Devil Blues have a polarizing effect. Chances are you’ll absolutely love one and shrug indifferently at the next. Still, kudos to Flying V Theatre for producing two gutsy and thought provoking works.