Theatre Review: ‘Witness for the Prosecution’ at The Cumberland Theatre 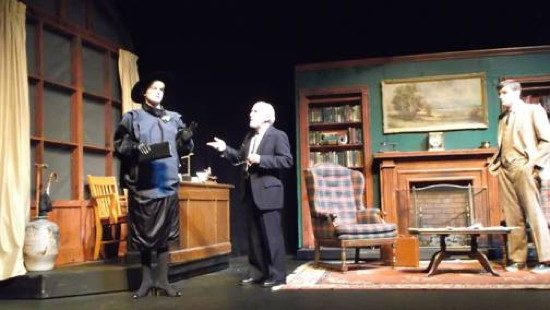 The cast of ‘Witness for the Prosecution.’
Photo provided by The Cumberland Theatre.

Imagine being wrongly accused of murder and the only person who can prove your innocence refuses to defend you. Add in a couple of plot twists, high emotion, and tense, revealing moments and you’ve got the recipe for Agatha Christie’s Witness for the Prosecution.

In this agonizing, psychological thriller now playing at the Cumberland Theatre, we follow the story of naïve Leonard Vole (Joseph Bromfield), a fraught young man accused of murdering a lonely and wealthy older woman he befriended after helping her with groceries. His innocent attentions quickly become misconstrued as murderous intent. Vole’s only defense must come from his wife, Romaine (Amelia Sciandra), and a legal team that admits the case is unbelievable.

In a tightly wound and emotional court scene, we unravel the evidence against Vole and Romaine’s subsequent betrayal with claustrophobic-like tension. The plot closes in on you in typical, heart-stopping Christie fashion until the moment of the big reveal arrives and the audience is left to untangle the motives.

Bromfield carries the lead with his angst-ridden and harried portrayal of Vole, leading the audience right into his deepest psyche, forcing them to experience the fear first-hand. Sciandra plays a delightfully cool and suspicious Romaine, always leaving the scene with more questions unanswered. James Michael Yuenger defends young Vole as Sir Wilfred, a clever but realistic attorney. Ron Growden plays Justice Wainwright. Marta Fiscus plays Greta/Janet and Bill Dennison plays Q.C. Myers, the prosecuting attorney and a handful of others round out the cast with delightful appearances as witnesses, Scotland Yard, and court clerks.

Witness plays through October 27, 2013 at The Cumberland Theatre, Johnson Street, Cumberland, Maryland. For tickets, call the box office at 301-759-4990 or purchase them online.