There are many things that move us when we listen to a song. More often than not, it’s the vocal performance. The American Voices concert at the Kennedy Center’s Concert Hall this past weekend featured a plethora of performances from many genres of music all meant to showcase the singer’s voice and man did they have the voices to do so. 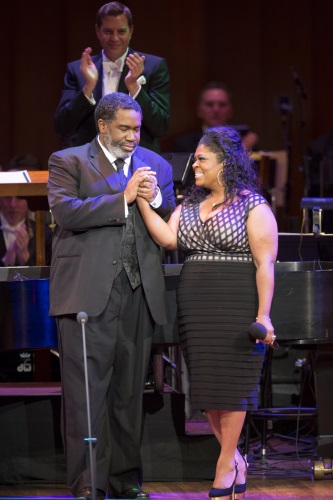 For the musical theatre types we had Tony Award winner Sutton Foster and Broadway star Norm Lewis. For the pop/rock types there was Ben Folds, Sara Bareilles, and Josh Groban. Over in jazz land we had the granddame of jazz singers Dianne Reeves and when Kurt Elling came down with laryngitis the night before, two up and coming jazz master class students named Kate Davis, and Michael Mayo stepped in and tore the roof off the Concert Hall. For the country music fans we had Alison Krauss while in gospel there was Kim Burrell. Last but not least for you classical types we had the esteemed baritone Eric Owens and the artistic director for American Voices legendary soprano Renée Fleming. Put this all together and have it accompanied by maestro Steven Reineke and the mighty National Symphony Orchestra and it’s obvious that there was something to satisfy every person’s musical palette.

With so many great voices it’s hard to choose the highlights but I’m going to give it a whirl. I had not heard Sara Bareilles sing before this concert but her rendition of Elton John’s “Goodbye Yellow Brick Road” made me a believer. Ben Folds is another performer I had not heard before but his original composition entitled “I’m Not the Man” which he premiered in this concert with backing vocals from Bareilles and Gracie Folds left me very impressed. Josh Groban is a rare breed of singer because of his versatility in styles. He can perform it all but in this case Charlie Chaplin’s “Smile” was his song of choice. The result was breathtaking.

… a once in a lifetime event.

Of course the musical theatre types came onstage and both hit home runs. Sutton Foster did so with the title song from Cole Porter’s Anything Goes which won her a second Tony Award and Norm Lewis held us in the palm of his hand with “Make them Hear You” Ahrens and Flaherty’s Ragtime. 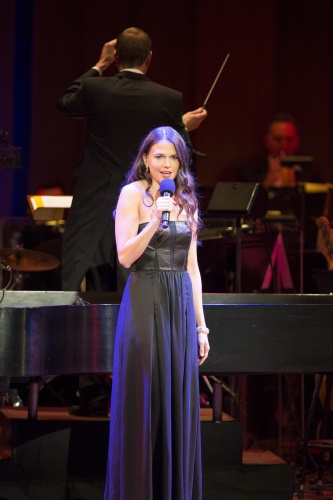 Jazz wise there is no better singer today than Dianne Reeves. Her sultry vocal on the title song from her cd “When You Know” was made all the more better with the symphonic orchestration by Reeves’ pianist and featured soloist on the song Peter Martin. Then there is the matter of the two young artists that stepped in for the ailing Kurt Elling. Imagine being in a jazz master class the night before and then end up being onstage with the NSO the night after. Kate Davis stepped onstage with bass in hand and landed right in the pocket with “I’m Gonna Lock my Heart and Throw Away the Key.” Michael Mayo’s performance of the standard “All of Me” makes him a prime candidate for being the next great jazz crooner.

My last choice for a standout performance goes to Renée Fleming and it was with  a song you might not think one of the greatest sopranos in the world would sing. Believe it or not “Danny Boy” as sung by Fleming was one of the most moving performances of the night and it goes to show that some opera singers can branch out into other styles of music and score big.

I usually wax poetic about our living musical treasure known as the NSO with maestro Steven Reineke and this concert again shows off the versatility of what I consider to be one of the top two musical ensembles in the country sharing that place with the Boston Pops.

Many singers from many genres of music came together for this special night of music celebrating the American voice. It was a concert I daresay was a once in a lifetime event. Fleming and company need to be congratulated for giving us the listeners two hours of musical bliss vocally while the NSO put us in orchestral heaven.

American Voices was a one night only concert event on November 23rd 2013 at the Kennedy Center’s Concert Hall. 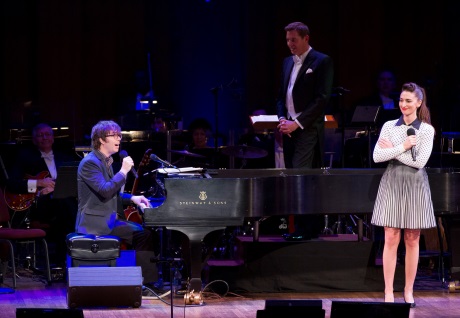