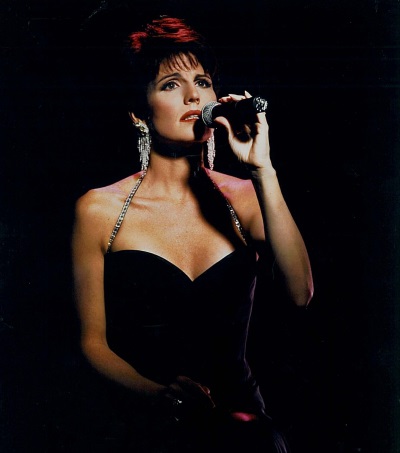 Stage and TV performer Lucie Arnaz has been entertaining audiences for over 45 years now. She is the daughter of the legendary comic Lucille Ball and Desi Arnaz and some of you might remember her growing up on TV in the series Here’s Lucy. But Lucie Arnaz has not survived in show business all this time living off of her parent’s fame. She has been seen on Broadway, TV movies and specials, and across the country in regional theatre, touring productions (her first tour Seesaw was at the Eisenhower Theatre here in DC) and for the past 23 years has had a successful concert career.

Arnaz’s self-titled “An Evening with“ concert in the Kennedy Center’s Terrace Theatre started out with a video montage from her many TV appearances on such talk shows as Arsenio Hall and Merv Griffin (those were the days).

There is nothing like making a grand entrance and Arnaz’s opening song, “Lulu’s Back in Town,” certainly made a good first impression. Other vocal highlights included “Just a Housewife” from the underappreciated musical Working and the Spanish infused “Cumbanchero.”

With any good cabaret act, the arrangements and musicians are as important as the headliner. In this case Arnaz had a red hot trio comprised of Ron Abel (piano/principal arranger with assists from Billy Stritch and Marvin Hamlisch), Tom Hubbard (acoustic and electric basses) and Julie Jacobs (drums). The musicianship was everything you’d expect from a high end trio.

The arrangements brought fresh spins on familiar songs which is always a good thing. Ron Abel’s take on “Hey Look Me Over” is from the only Broadway musical her mom performed in called Wildcat. It is a song Lucie Arnaz swore she would never sing because it was her Mom’s signature and was thought to be too high school marchy in style. Abel’s arrangement definitely fixed that by slowing the tempo down which turned it into a perfect cabaret song and a fitting tribute to her mom. As Ron Abel is a successful composer in his own right, it was only fitting that Arnaz chose one of his own songs to perform called Slow Dancing. All I can say is that I want to hear more.

Another example of fine arranging came with the pairing of “It’s Alright with Me” and “Something’s Gotta Give,” as arranged by veteran jazzer Billy Stritch.  The combination of these two songs put together with Arnaz’s vocal rendition made for a true highlight of the evening.

Lucie Arnaz’s long association with Marvin Hamlisch was featured with a newer more “mature” arrangement of “I Still Believe in Love” from They’re Playing Our Song which Hamlisch wrote the music for and Arnaz starred in on Broadway with Robert Klein in 1979. Because Hamlisch was a master arranger himself the song’s lead in was a combo of “June Bride” and “Always.” Put these three songs together with a video montage showing home movies of Arnaz with her parents, kids and husband, actor Laurence Luckinbill and it became a tribute to all of the people in her life that she cares a lot about. As with “Hey Look Me Over” for her mom there also was a solo tribute to her dad with a piece I had not heard before called “Leader of The Band” and my favorite song of the evening had to be the touching “Another You.”

While you might feel the patter sections of her act go on a little longer than they should, you have to admit Lucie Arnaz is passionate about her life and being a good parent to her five grown children. She and her husband moved the family back from Los Angeles and made a promise that no matter how they had to do it, there would always be one parent at home if the other is off working. You never hear of that anymore.

Lucie Arnaz’s story is one of a kid born into show business and making a success for herself outside of her parent’s name. There is a reason why she is still performing. Her voice and rapport with the audience is one of a very down to earth performer. Add to this the musicianship and her arrangements by Ron Abel and company and An Evening with Lucie Arnaz was a fun and enjoyable look into this multi talented performer’s life.