fallFringe Review: ‘Disco Jesus and The Apostles of Funk’ at the Redrum at Fort Fringe 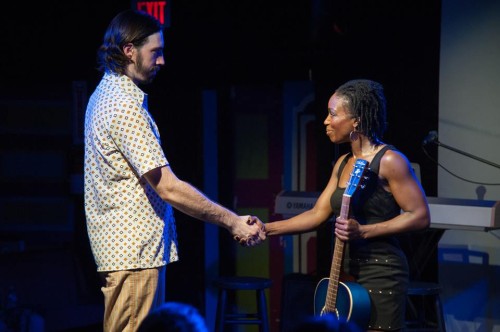 Every once in a while there is a show I want to see, but for varying reasons I am not able to. In the case of the funkalicious musical Disco Jesus and the Apostles of Funk there was a very good reason. It was because they sold out Capital Fringe during their summer run that I am very grateful there is a return engagement happening now at fallFringe.  More people can experience this wonderfully sung and acted fun musical. Featuring a score by Paul Foreman and Vaughn Irving (who also did  the book and lyrics), the show features a six piece band, a  Diddy type narrator that favors us with biblical like quotes, a la Curtis Mayfield and Issac Hayes among others and one of DC’s best performers in the lead.

The plot concerns Mary (Felicia Curry) who is a working bartender until she is fired from her job after an incident with a customer. Not knowing what she is going to do next, she ends up at another club which features a band called Disco Jesus and The Apostles of Funk. Yes, the lead singer (Vaughn Irving) looks like Jesus. Mary falls in love with Jesus, and he makes her the lead singer in the band. This does not sit well with Xanna (Kedren Spencer), as she has been with the band for three years already. The in-fighting continues: Mary is made another offer by a competing producer (Matthew Schleigh) and that is where I will leave it, because I’ve given you the first but not the last or everything (Barry White reference for you younger readers).

Performance-wise, all I can say is no one is giving us the “Shaft” here. All performers sing and act and in some cases play instruments to full ability. As our overseer Diddy, Oghene-Bruru Ajueyitsi has the deep voice and cool dance moves that in the 70s made women swoon. Kedern Spencer and Autumn Seavey Hicks as the backup singers Xanna and Jo do well with the characterizations. Spencer brings all the attitude that a jaded vocalist needs and Hicks with not a lot of stage time makes a fine impression. The band made up of Alex Aucoin (Drums), Jason Wilson (Bass), Matthew Schleigh (Guitar), Liz Dutton (Keys), Suzanne Edgar (Sax), and Music Director Steve Przybylski  on Trumpet provide the funk infused musical accompaniment with lava lamp like energy while being clothed in 70’s garb that begs the question “Did we actually wear this stuff”?

As Jesus (real name Chris) Vaughn Irving has the look and the talent for this role. It’s amazing to me that Irving was able to write and star in this piece and excel in all departments. Last but not least, there is the force of nature known as Felicia Curry as Mary. With a set of vocal pipes that is something to behold, her big solo “The Way” is in itself worth the price of admission.

Other musical highlights include big group numbers like “Resurrection Boogie” and “Funk Creation.” The score captures the style of the period and pays homage to some of funk’s musical pioneers in the process.

Director Doug Wilder has jumpstarted the staging with oodles and oodles of fun choreography and makes the most out of the Redrum stage space while utilizing the aisles of the theatre as well. Paul Callahan’s lighting makes full usage of the Fringe light plot to add to the fun.

Get your funk on and go see why this show was such a big hit. With a dream cast, fun story and high end score, Disco Jesus and the Apostles of Funk is “Super Fly” entertainment and definitely deserves a future production in a commercial venue.

Advisory: Recommended for ages 13 and up. Show contains profanity and bad religious jokes that might offend some.

Disco Jesus and The Apostles of Funk plays through November 14th,2013 at Fort Fringe-Redrum which is located at 612 L Street NW in Washington DC. Tickets can be purchased by clicking here.