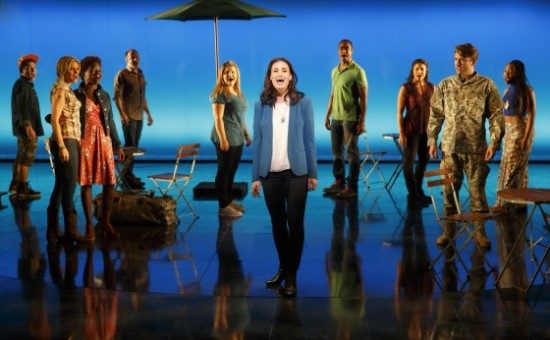 DC’s National Theatre for a long time was a prime space for Broadway tryouts. We forget now that shows use to play one, two, or even three cities before going to NY. It was a way to fix a show without the vultures on Broadway seeing a show before it was ready. In recent years with rising production costs, it has become less feasible for a Broadway show, particularly a musical, to have a tryout somewhere. The new musical If/Then brings the great tradition of a pre-Broadway tryout back to DC, and what better place than the National Theatre, which housed the original pre-Broadway engagements of Showboat, Hello Dolly, and West Side Story, to name but a few.

The show is written by the Tony Award winning team of the Pulitzer Prize winning musical Next to Normal Tom Kitt (music) and Brian Yorkey (book and lyrics). It stars Tony Award winner Idina Menzel in her first Broadway stage role since Wicked ten years ago and features Broadway vets LaChanze (Tony Award winner for The Color Purple), Anthony Rapp (Rent), Jerry Dixon (Once on This Island), and Jenn Colella (Chaplin) as part of the strong supporting cast. 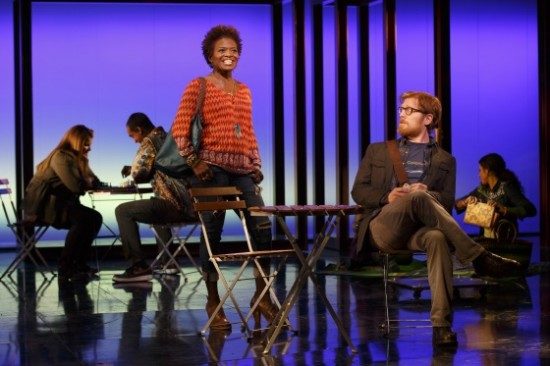 When reviewing a show in tryout you have to keep saying “They have plenty of time to fix things.”  If/Then is due on Broadway in the spring of 2014. The show ends here in DC on Dec 8th, which means there will be plenty of changes and cuts made. A song I might think was wonderful might go away for something even better. My point is that the show is in a constant state of flux right now; so I am going to give a brief plot synopsis and maybe suggest what could use fixing to make the show better.

The show concerns Elizabeth (Idina Menzel), who is a city planner with four choices of people to fall in love with. There’s her married boss Stephen (Jerry Dixon), her gay friend Lucas (Anthony Rapp), a lesbian kindergarten teacher named Kate (LaChanze), and an army guy named Josh (James Snyder) that she meets in the park while listening to a guitarist. Right here is the first part of the show that needs some looking at. Brian Yorkey’s book has us jumping back and forth between characters and, aside from the lighting changes, it’s unclear where we are time-wise. If all of this is happening in Elizabeth’s head, then it needs to have a clearer set up, because in act 2 when the story concentrates more on her marriage to Josh, the show has a clearer straight forward approach. Then, throw in a possible plane crash, an unwanted pregnancy, and assorted other plot points and you can see that the book needs the most work.

But remember my mantra: “It’s a tryout with plenty of time to fix things.”

The strongest part of the show right now is the score by Tom Kitt and Brian Yorkey, which features several good group numbers such as “Surprise” and the opening called “If I Told You/If”  and one heck of an eleven o’clock song for Idina Menzel called “Always Starting Over.”  These are the kind of magical moments during a tryout where you sit up and take notice of what is being created on the stage, so you can say you were there at the beginning of the show’s journey. Other musical highlights include LaChanze’s star turn called “The Story of Jane” and a lovely duet for Menzel and Anthony Rapp called “Some Other Me.”

The score is expertly conducted by Carmel Dean, and Michael Starobin’s 13 piece orchestration does total justice to Kitt’s melodies throughout. The strings and reeds really make the music take off, particularly in the ballads. The lush vocal arrangements are by AnnMarie Milazzo.

I must admit I did wonder what was up with some of the choreography by Larry Keigwin. It felt at times like it just came out of nowhere and in one or two instances detracted from the singer delivering the song.

Performance-wise, everyone does a great job; but let’s not kid ourselves, it is Idina Menzel’s show. From the top of the show and all the way through Menzel belts like no one’s business and makes a rather cold and sometimes intense character very tolerable. It really is a star turn. Anthony Rapp as Lucas gives a solid performance and has an endearing quality about him. LaChanze as Kate does not have as much stage time as Menzel; but when she is there, you notice. Her only featured number reminds us what a brilliant talent she is. James Snyder as Josh gives a touching performance of a guy in the army who is totally devoted to his family until duty calls him away again. I won’t tell you what happens next, but you might be able to figure it out. It was very nice to see Jerry Dixon back onstage again even though his character is a bit of a slime bucket, and Jenn Colella as Anne (Kate’s lover) has a moment to shine in a duet with LaChanze called “No More Wasted Time.” 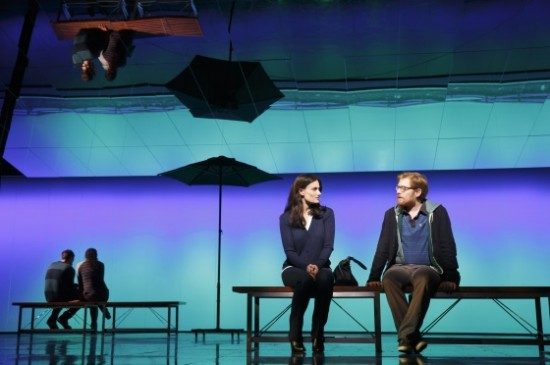 Production-wise, the show seems a bit overdesigned by Mark Wendland. There is a giant mirror that at times tilts up so you get an ariel view of the stage action. While this is a nice effect it doesn’t add anything to the show. It’s as if the creators are trying to make the show bigger than it actually is. This is a prime example of why tryouts are important. By the time the show hits Broadway there could be a whole new design concept in place.

Director Michael Greif is off to a good start with shaping the show, and I have no doubt he can do what he did with Next to Normal and make the necessary fixes to make the show a success.

There is something about watching a show in its first production that makes it all the more special. If/Then is a show that is, as expected, not perfect yet, but it has the potential to be. If act one can be focused more, the show has a really good shot on Broadway. It already has a score and some knockout performances attached, so if all goes well, If/Then has a real good chance of being a prime candidate for Tony Award contention this season. We’ll see how it goes and I’m curious for the outcome.

Advisory: Adult themes and some language

Running Time: Two Hours and 50 minutes with one intermission

‘If/Then’ plays through December 8th 2013 at the National Theatre which is located at 1321 Pennsylvania Ave NW in Washington DC. Tickets can be purchased by stopping by the box office, by calling 800-514-3849 or by clicking here.