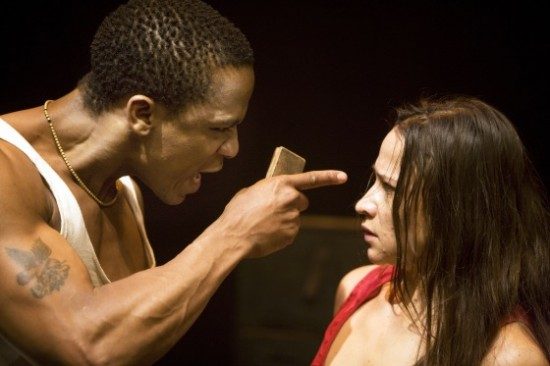 One of the best things about DC theatre is when we get a chance to host a theatre company from another part of the world. Shakespeare Theatre Company is doing just that, as the South African State Theatre’s potent and brilliant production of Mies Julie is now playing at STC’s Lansburgh Theatre as part of their North American tour.

…the must see theatre event of the season.

Writer/director Yael Farber has taken her inspiration from August Strindberg’s Miss Julie, but the setting is a large farm in South Africa. John (Bongile Mantsai) and his mom, Christine (Thoko Ntshinga), both work for the father of Mies Julie (Hilda Cronje). Christine does the kitchen and house chores, while John cleans the father’s many pairs of boots among other things.  A passionate love affair between Mies Julie and John starts to build and things get hotter and hotter while Christine does not approve for obvious reasons. The notion of a servant having any kind of a relationship with the white daughter of the employer is something you just don’t do. Farber’s adaptation crackles from start to finish. The dialogue is far more interesting than I ever remembered Strindberg being and the touches of Xhosa (a South African language) thrown in give a sense of the area. 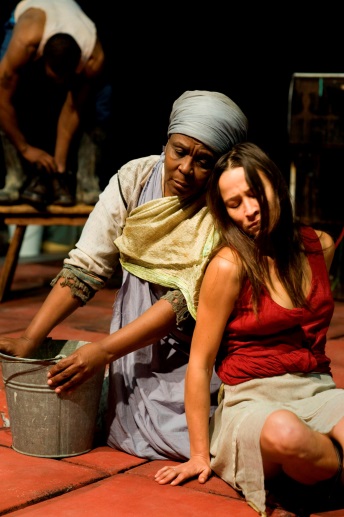 All three cast members give change your life performances. As John, Bongile Mantsai gives a commanding performance.  Tall in stature, you totally understand that he wants something better for himself.  Thoko Ntshinga as Christine shows us that sometimes it’s just better to go along with things no matter how you feel about them. This is why Christine is able to keep her job after things go off the deep end in the later part of the play. Last but definitely not least, we have Hilda Cronje as Mies Julie. Cronje is striking to look at, even through all of the blood and dirt. From the moment she steps on stage, you are mesmerized.

The soundscape and music for the production are one of the things that make the show unique.  Daniel and Matthew Pencer perform a soundtrack that utilizes saxophone and all kinds of sound samples. The result is an almost eerie quality, as things get hotter and hotter. The more sexual tension there is between the couple the more intense the soundtrack gets. It is a perfect complement to the performances. Adding to the musical end of things is singer/musican Tandiwe Nofirst Lungisa. With native vocals and an instrument made out of a gas can and bow, her contributions are a definite plus. 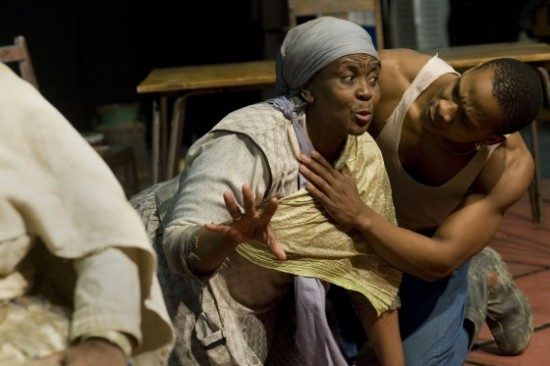 The set and lighting by Patrick Curtis (based off of original lighting by Paul Abrams) proves that you don’t need much to make your point. The set is minimal with only a refrigerator and a table full of boots for furnishings. The lighting is enhanced by tons of haze and fog to give an almost hellish like look to the production. Here is a case where gobs and gobs of scenery would have smothered the simple story so Curtis wisely has chosen not to go that route. 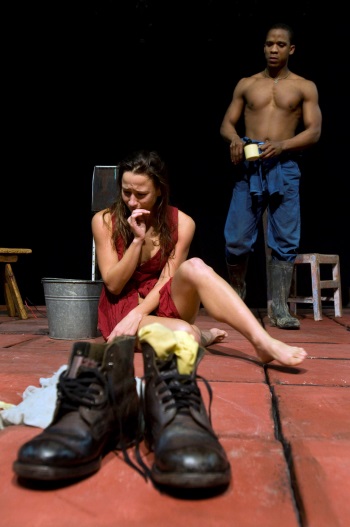 Farber’s direction matches her adaptation for excitement from start to finish.  She slowly builds the tension between the two lovers, leading to a climax that is something that you might not expect.

I could analyze this play and talk about class distinction and the effects it has, but I am not the right person to be doing that so I will leave that to the scholars and just tell you that Mies Juile is one of those pieces of theatre that if you don’t see you will regret it forever. Simply put, from the production to the performances, the Baxter Theatre Center and the South African State Theatre have given us the must see theatre event of the season.

Advisory: Contains strong adult themes and nudity. Recommended for audiences aged 16 and up.