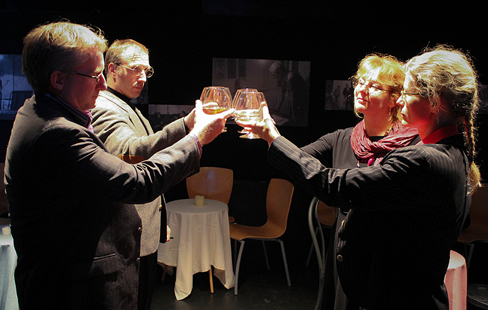 Before The Ambassador Theater’s inventive rendition of Vaclev Havel’s Protest even begins, the set transports you to another place and time. Café tables are scattered around the black box theater, leaving only enough space for the actors to bustle through. A small stein of pilsner and a dish of pretzels and nuts give theater-goers something to sip and nosh as they get their bearings. Moody music pipes in over the speakers as chatter from the audience rises. Before you know it, you’ve arrived. It’s circa 1978, and you’re about to foment revolution in a coffeehouse in Soviet Prague. Even black-and-whites of Havel—Czech dissident turned president—line the wall; smoke-filled air is the only thing missing.

At either end of the set are two home studies. Large desks hold up typewriters, books and papers, and a decanter of brandy. There are two chairs in each. 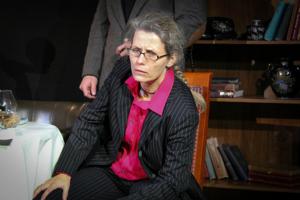 In one study you are about to witness a kind of fraught reunion between Vanek (Mike Crowley) and Stanek (Ivan Zizek), former compatriots in the struggle against repression in the former Czechoslovakia. Vanek has just been released after serving a term as a political prisoner. Stanek, you learn, has evaded prison by toeing the line and working inside the system when he had to. A recent case of censorship has brought them together again.

…transports you to another place and time.

At the opposite end, a parallel conversation ensues, between Vankova (Hanna Bondarewska, also the theater’s founder and artistic director) and Stankova (Sissel Bakken), female alter egos of the two old friends. This unusual addition to Havel’s well-known work was conceived by director Gail Humphries Mardirosian, presumably to update the play for contemporary audiences and give female dissidents their due. 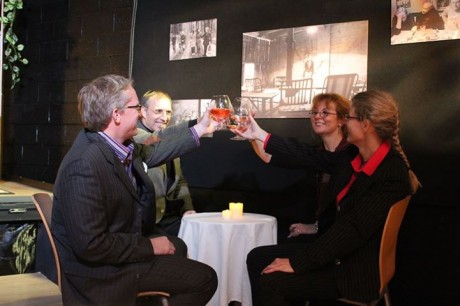 Humphries executes the innovation via simultaneous recitation at various points and through the continuation of dialogue begun by Stanek/Vanek in one study by Stankova/Vankova in the other. In some of the tenser, more reflective moments, the pairs cross paths and inhabit each other’s spaces. The intriguing treatment results in the feeling of watching two plays at once.

Still, the question Havel asks is singular. What does it mean to be an activist and an artist? To follow a calling that has no clear code or path?

“I respect your reasoning,” answers Vankova when Stankova pushes her for absolution of choices that kept her and her family safe while others went to prison.

The message is clear: to be an activist is not like becoming a priest, a doctor, or a journalist. There are no liturgies, anatomies, or inverted pyramids to follow. Your only guides are your conscience, your collaborators, and your predecessors who, like Havel, sometimes illuminate the way.

Running Time: 75 minutes, with no intermission.