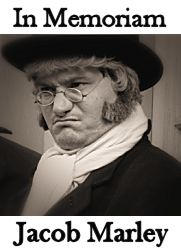 With carolers, holiday food and drink, and much more, guests will remember the departed in a festive setting, while supporting Jacob Marley’s favorite theater: Unexpected Stage! Cocktail attire is encouraged. Advanced-sale ticket price is $45 ($25 tax-deductible). For an additional $25, you can participate in the wake with scripted lines, or you can sponsor a character of choice and capture the moment with a photo. For just $10, you can have a keepsake photo with Jacob Marley himself. For tickets, call 301-337-8290 or visit www.unexpectedstage.org.

“A Wake for Jacob Marley” is the brainchild of Unexpected Stage Company’s co-founder and co-artistic director Christopher Goodrich, an award-winning theater artist and poet, and a former Emerging Writer’s Fellow at The Writer’s Center. Explains Goodrich, “A Christmas Carol is such a popular show during the holiday season, and I wanted to present those characters from a different perspective. I have also scripted new characters, including some lesser-known ghosts of Christmas. The audience is involved, so you don’t know what might happen next.”

Guests can mingle with characters who are paying their respects to the departed. The cast includes:

Christopher Goodrich is the Co-Producing Artistic Director of Unexpected Stage Company. He is the recipient of the prestigious Stella Adler Studio Who’s Who in Drama award for his work at the four year Conservatory. He has directed more than 20 off-Broadway and Off-off Broadway features including the American premiere of Canadian playwright Norm Foster’s Wrong for Each Other (Manhattan Theatre Source); the world premiere of National Book Award-winner Gerald Stern’s Father Guzman (Poet’s Theatre); and the world premiere of Kenneth Koch’s Edward and Christine (Columbia University). In addition, Christopher is a widely published and award-winning poet whose first collection, Nevertheless Hello, was published by Steel Toe Books in 2009.

His poetry has appeared in Margie, Entelechy International, Diner, 5AM, Kestrel, Hotel Amerika, Rattle, The New York Quarterly, The Sycamore Review, The Cimarron Review and The Worcester Review among others. He has also been featured on Verse Daily and NPR. He is the recipient of a Dorothy Sargent Rosenberg Poetry Prize and Emerging Writer’s Fellowship from The Writer’s Center in Bethesda, MD, and he holds an M.F.A. from New England College. His latest manuscript, No Texting at the Dinner Table, was recently accepted by New York Quarterly Books.