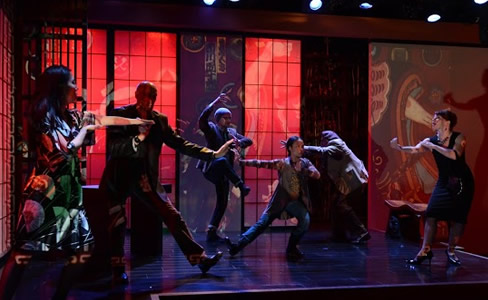 “A rose is a rose is a rose.”  Gertrude Stein’s famous line spoke to the reality of the object: the object in its materiality trumps the symbolic name we offer it.  Hence, “a rose by any other name would smell as sweet,” says Juliet to her Romeo of that hated name “Montague.”

Might we say the same of “beauty,” that ephemeral quality, or is “beauty” dependent upon the words that define it?

Darius Wheeler, the trader in antiquities we meet in Constellation Theatre’s 36 Views, gives us the Stein definition.  “Beauty is beauty,” he seems to say.  Like pornography, “you know it when you see it,” or so said a Supreme Court Justice about the French film, The Lovers (and by the way he did not see it there).

Naomi Iizuka’s 36 Views is asking its audience that same question: “Will you know it when you see it?” What is the “it”?  Is the “it” the beautifully rendered fake?  Or is the “it” the original 11th century relic that our culture now deems so valuable?

The questions asked by Iisuka’s play are indeed fascinating.  Unfortunately, the way she asks them and the way that they are presented by Constellation are a messy hodgepodge of styles and storylines that fester beneath the production’s splendidly beautiful renditions. 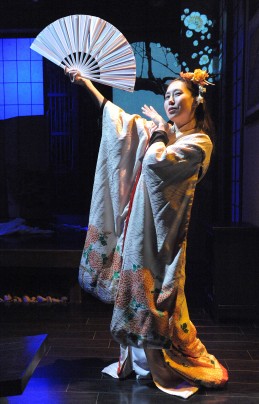 Now, if that is the point of Iisuka’s 36 Views and Allison Arkell Stockman’s direction, then success is theirs, albeit ironically.

For it is easy to linger in the beauty of the production and simply write off the gaping holes in the play’s story.  After all, have not each of us wanted to linger in a beautiful embrace or a delicious kiss despite the fact that we knew our lover was a liar and a cheat?  Of course we have.

Unfortunately for me, I have grown too old for such nonsense.  The faults in 36 Views wear on my patience like a bad action/adventure movie with great scenery and beautiful people but a story line that limps like week old lettuce.

Let me start with the plot in this strange postmodern agglomeration of style and story.

Art dealer Darius Wheeler (charmingly played by Jim Jorgensen by the way) meets Professor Setsuko Hearn (deftly played by Sue Jin Song) at a party he is throwing for a famous reclusive artist, whose fake artist’s name escapes me.  Wheeler’s attraction to Hearn’s “beauty” is instantaneous: her quick wit and intellectual astuteness are also quite disarming.  Their story is, also, the most engaging and believable of all the plot lines in 36 Views.

In keeping with the play’s title, the first scene is a scene about the play’s historical subtext:  “Orientalism,” a term defined by scholar Edward Said in his now famous book Orientalism.  In this scene Setsuko cuts through Wheeler’s come on as so much stereotyping of the Asian woman as exotic goddess.  The scene ends with a wood-knock, from sound designer Palmer Hefferan, that immediately shifts us back into the tangible present, which is none other than the beginnings of Wheeler’s seduction of the young academic, whose specialty is the Japanese Pillow Book, an 11th century female book of eclectic observations and poetry.

We then meet John Bell, Wheeler’s assistant and would-be novelist (played with disarming naivety by Ashley Ivey), and his ongoing flirtation with multi-media artist Claire Tsong (played by Tuyet Thi Pham with a delightful honesty).  Tsong is Wheeler’s artistic restorer and also fabricator, for in this world of ancient art money is everything, and the real and the fake are difficult to discern without scientific testing.

Though Wheeler’s restorer, it turns out that Tsong hates him passionately, and we find out later personally.  When Bell inadvertently (and quite funnily) lies to his boss Wheeler about his own prose, describing it as a newly discovered Pillow Book, Tsong jumps on the opportunity to defraud Wheeler, who believes the lies and risks being out of a million pounds.

Then we meet Elizabeth Newman-Orr (played coyly by Megan Dominy); she is “an art dealer” of a different sort.  She wants Wheeler to behave criminally in the transport of a “national treasure.”  He agrees but only after asking for a very healthy reward.

And then there is Owen Matthiassen (played very academically by David S. Paglin), the Orientalist, the old academic who is doing his best to adjust to the changing cultural views of Asia and Asians. 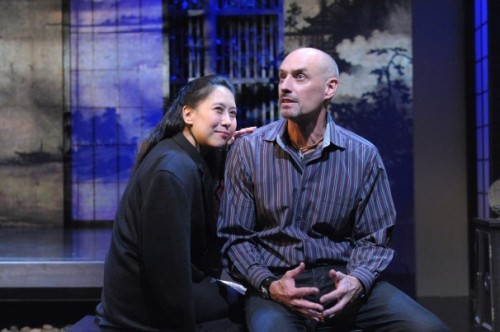 The contours of Lizuka’s play seem as genuine as the contours of an artistic fake.  As long as the viewer asks no questions about backstory or rationale or plausibility, there is little problem enjoying its gorgeous exterior.

Who are these people, i.e., characters?  Clearly, Ms. Iisuka wants us to acknowledge them as fakes, bearing little resemblance to “the real,” i.e., anyone we might actually have met and about whom we might actually have cared.  In fact, most appear more suited to a Hollywood Adventure movie starring Harrison Ford than to human beings per se.

The holes in the plot are many.  Ms. Newman-Orr it turns out is a reporter looking for her big break: now, how she paid for her attempted expensive hoax of Wheeler is left unanswered.  Perhaps, she is a millionaire beginning journalist.  And what about that “National Treasure” she absent-minded left in Wheeler’s possession?

The fact that an elaborate million dollar artistic scam can be concocted in a few short days is more than even Hollywood would dare to pull off.  This is particularly true when the impetus for the scam is based on Bell’s uncontrollable impromptu lie about his own 21st century prose, which then fools a noted scholar like Hearns.  And, yes, I know that historical frauds of just such mind-blowing proportions have occurred in the West’s relationship with the East; and, yes, even in our academic communities; but in this plot this twist represents a case of the impossible trumping the possible.  But even Hollywood has the thieves disappearing onto a beach in Rio.

And I will not even tell you who Tsong turns out to be, but it is perhaps the most far-fetched Hollywoodesque idea yet.  Her revenge story might be worthy of a big budget film, but her obsession would have probably led her to a far more elaborate Hollywoodesque scheme.

Now, all of that said, Constellation could have pulled off this script and its postmodern polyglot of a style, in which the believable and the unbelievable, the romantic and the arcane, the adventure story and the poetic are crunched together in a Venturi-like design.  The directorial approach, however, would have had to have been far more radical and risk-taking and probably tongue-in-cheek.

Ms. Stockman’s vision, though accepting of the occasional intrusion from other theatrical forms, was grounded too deeply in the realistic.  As a result, the audience was left yearning for a clearer explanation of what transpired.

Scenic designer A. J. Guban created a fabulous set for the production.  Kendra Rai’s costumes were splendid; in particular, the choreographed disrobing of Hearn near the top of the show epitomized the historical layering of color and texture upon the real.  Production designer Aaron Fisher most assuredly added to the production’s beauty with images from Japanese artist Hokusai’s famous collection, 36 Views of Fuji, on which the script drew inspiration.

To be sure, ConstellationTheatre should be commended for offering Washington audiences such a poetic theatre.  Theatre that explores the philosophical and aesthetic dimensions of our existence is worth the effort.  Even as I sat bemoaning the gaps in this production I marveled at the questions raised by 36 Views.  I only hope those questions might find a better vessel of expression.