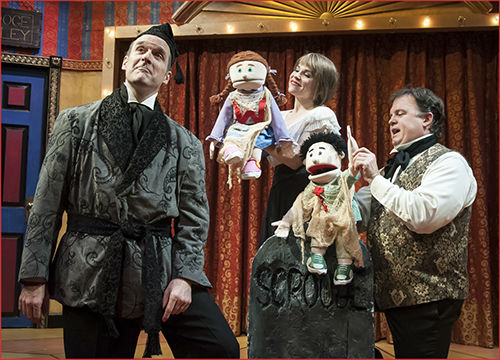 A Broadway Christmas Carol, now playing at Old Town Alexandria’s intimate MetroStage, is a must see for the Broadway musical lover.  An inventive and professional cast of four brings life and humor to Charles Dickens’s chilly tale of Ebenezer Scrooge (Peter Boyer) and his winding path from miserdom to the generosity of the Christmas spirit.

…a pleasure for holiday theatergoers not looking to take themselves too seriously.

This DC-exclusive show is an irreverent revue that uses Dickens’ time-honored tale of A Christmas Carol as a vehicle for clever parodies of Broadway favorites, along with mostly family friendly humor and a myriad of pop culture references. Spirited song and dance numbers give the show a Shrek-like sense of humor: a little cheesy and little crude, but ultimately charming and familiar. 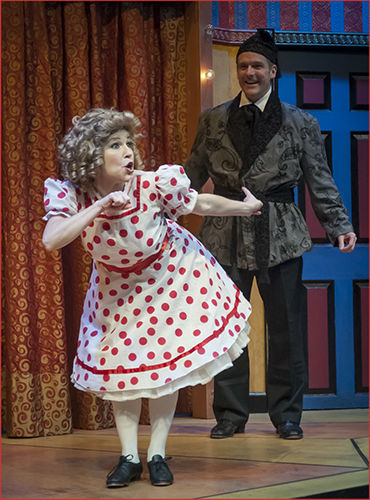 Many of the jokes in A Broadway Christmas Carol will be lost on those without a baseline knowledge and affection for classic musicals, but it is a fun twist on a holiday tradition.

The audience will cheer and giggle as they hear familiar tunes performed by this cheerful and vocally talented cast of actors. These clever song-and-dance parodies feature merry piano by music director Howard Breitbart, also known as “The Man Behind the Piano.” The show includes songs from Carousel, Guys and Dolls, Thoroughly Modern Millie, and The Music Man, not to mention a winking rendition of the ever-painful and omnipresent “Memory” from Andrew Lloyd Webber’s Cats called “Touch Me.” “It Sucks to Be Thee”–a spoof of the contemporary musical favorite “It Sucks to Be Me” from Avenue Q, Robert Lopez and Jeff Marx’s raunchy homage to Sesame Street–is a particular treat.

Under direction from Michael Sharp, Scrooge (Peter Boyer) is a boyish and funny (and ever so slightly effeminate) John Cleese-type, while the versatile “The Man Who Isn’t Scrooge,” (Russell Sunday) plays such roles as Scrooge’s nephew Fred, his former boss Fezziwig, and the “Ghost of Christmas Past”–a hacking, wheezing, hard-of-hearing Father Christmas type with a tennis ball-clad walker. Tracey Stephens, as “The Woman Who Isn’t Scrooge,” goes from Victorian do-gooder asking for donations to an impeccable Mae West, a sunny Annie and a slightly spacey Christmas present in a lime green wig. 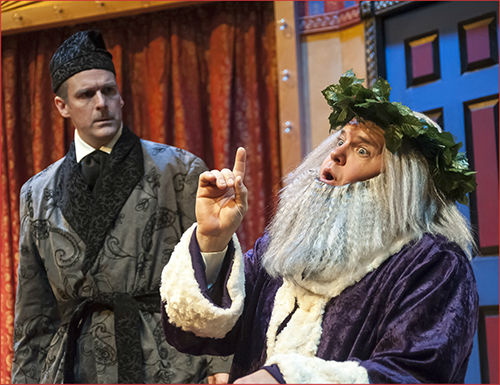 With a simple Victorian-styled set, and a bright, festive atmosphere, this show is more for lovers of Broadway than it is for lovers of A Christmas Carol. The plot at times is overwhelmed by enthusiastic songs, joke-packed performances, and various absurd elements like puppets and rubber chickens.

It will be a pleasure for holiday theatergoers not looking to take themselves too seriously.

Running Time: 1 hour and 30 minutes with one 15 minute intermission.

Advisory: Some content may not be suitable for young children.

A Broadway Christmas Carol runs through December 22 at MetroStage, 1201 North Royal Street, Alexandria, VA. For tickets, call the box office at (703) 548-9044, or purchase them online.