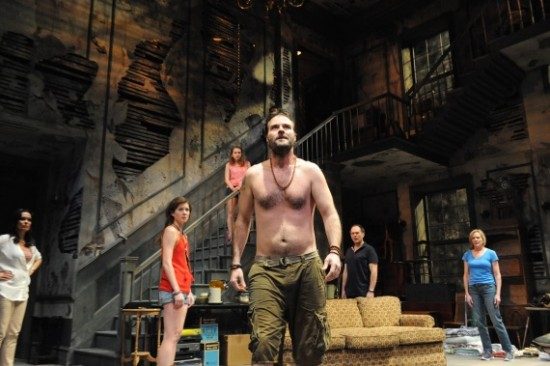 Before a show, I never read the program.  I read the title, which in this case is Appropriate.  I like to experience a theatrical performance raw, without the parameters that someone’s verbiage, like a director’s or a dramaturg’s or a playwright’s, might set.

...cicada songs into the summonings of eerie spirits.

After having judged my experience of Appropriate—a taut, well-pace drama about a white, Southern family’s historical racism—I discovered that the play’s wright, Branden Jacobs-Jenkins, is an African American, from Washington, DC.

In most cases such knowledge would do little to frame my experience of a theatrical production.  In Appropriate’s case, however, it makes all the difference. 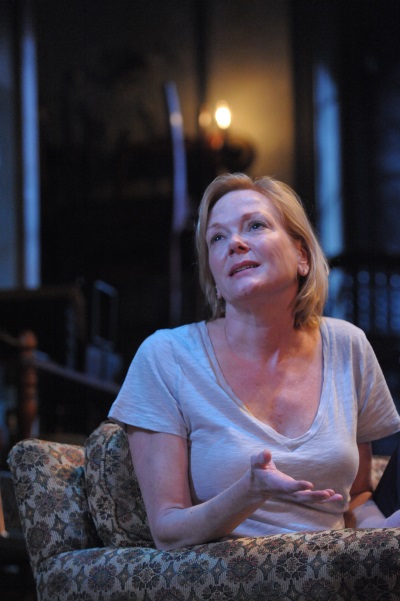 By the middle of the second act, I had begun to grow weary—of the yelling, of the play’s three adult children and their utter lack of memory of their own father, and of the inevitable and predictable dysfunction to which such a lack leads.

The recently departed father of the play remains just as much a mystery after my discovery of the playwright’s historical roots as he was before it.  Who was this man and why don’t his children have a single memory—good or bad—of him?

And that essential want of the script, the mechanism of historical denial—there can be no denial if there is no memory—will still be its most glaring want when all is said and done.

Set on a crumbling plantation in Arkansas, complete with an overgrown family cemetery right outside its back door, and a slave cemetery hidden somewhere in the nearby woods between the home and the algae toxic lake, the world of Appropriate is as predictable as its conclusion.  Like its ghosts, however, that world and its byproducts will simply never say their final good-byes.

For racism’s roots are deep, and even the smallest of veins grow into whole new kudzus.

The Lafayette family has returned to the family plantation following the death of its patriarch.  The home, a.la., Tennessee Williams, is crumbling into ruins.  It is hocked to the gills in debt.

The three siblings hate each other.

The oldest, “Toni,” is played with searing realism by Deborah Hazlett. Recently divorced, she desperately clings to her son, played by Josh Adams with that “oh so perfect teenage resentment for all things mother.”  Toni bubbles with bitter resentment herself, as she has received little thanks from her brothers for playing part-time caretaker to her ailing Dad.

Her oldest brother, “Bo,” played by David Bishins with grim determination, has finance-brain. For him and his Jewish wife (the dead patriarch referred to her as his son’s “Jew” wife), everything is a finance charge.  His wife, Rachel, is played by Beth Hylton, who gives the family-outsider a determined shrillness.

The baby of the family, “Franz,” is played by Tim Getman, who convincing captures the youngest son’s fierce need for redemption. A decade or so ago, he behaved badly with underage females and subsequently disappeared (maybe from the law), the disgraced member of the family.  He now is set to be married, to another seemingly underaged female, “River,” one of the more well rounded characters, played with a fabulous combination of grit and new age etherealness.

The play’s protagonist is a collection of photos discovered by Rachel and Bo’s son, Ainsley, played convincingly by Eli Schulman.  They are also leered at by their daughter Cassie, played with just the right amount of Junior High adulthood by Maya Brettell.

The black and white antique photograph collection belonged to the father’s estate.  They were taken either in his early adulthood, or they are family heirlooms, taken by the grandfather and saved by the son.  They depict several dozen African Americans lynched, tortured, castrated, murdered.  With their viewing by the children, we have the initial “appropriate” of the play’s title. 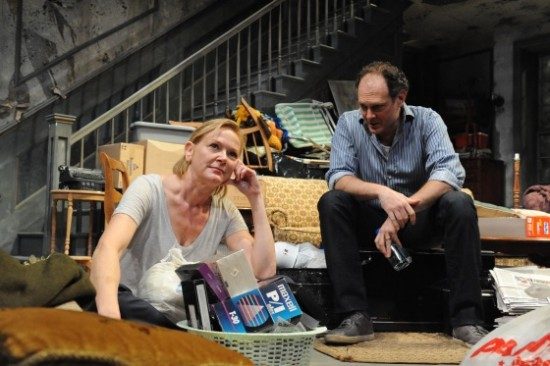 With the family plantation in ruin, hardly worth the ground on which it and its cemetery are constructed, it turns out that these photographs are worth a lot of money.  One can only assume that they, like Nazi memorabilia, are collectors’ items to those who still fantasize about the “good old days.” (I say assume because the play never specifies who might pay hundreds of thousands of dollars for such images of death.)

With money at stake, a. la. Fortune’s Bones, this white family now wants to “appropriate” the racist legacy of their family for fortune and gain.

Whether it is “appropriate” for playwright Branden Jacobs-Jenkins to “appropriate” that legacy for his own gain, is indeed another whole kettle of ethical quandaries (after all, did not Paul Simon make millions off South African township songs with his album Graceland?).

Liesi Tommy has directed the show tightly.  The pacing was excellent even if the ferocious shout-fest between the siblings needed to be given more levels and variety and, most definitely, greater nuance.

The production’s scenography was fabulous to behold.  Set designer Clint Ramos’s old plantation interior did indeed haunt the stage.  Colin K. Bills’s lights gave it presence, and costumer Kathleen Geldard kept the characters as authentic as a displaced, separated extended family needed to be.  The original music and sound design by Broken Chord turned cicada songs into the summonings of eerie spirits.

Unfortunately, the play fails to address adequately its central question: how is it that intelligent people continue to deny the existence of what stares them boldly in the face?  In Appropriate’s case, that is old Southern style racism and its telling artifacts.  Perhaps, if these siblings had better memories of their father and his telltale expressions of hate and murder, they might have more clearly denied and argued about the obvious conclusions.

America’s denial of unpleasant truths is not, however, limited to those areas of discourse about which much has already been written and acknowledged by popular culture, i.e., Southern racism.  In fact, the human propensity to deny the unpleasant truth about its own nature transcends us.

The most unpleasant of truths are always those that we know little about and those we have yet to acknowledge; but that is the subject of another play, yet to be written or at least yet to be produced.

Running Time: 2 hours, plus an intermission.

Advisory; mature themes and some language