Theatre Review: ‘Breaking the Code’ at the Kossiakoff Center (APL) 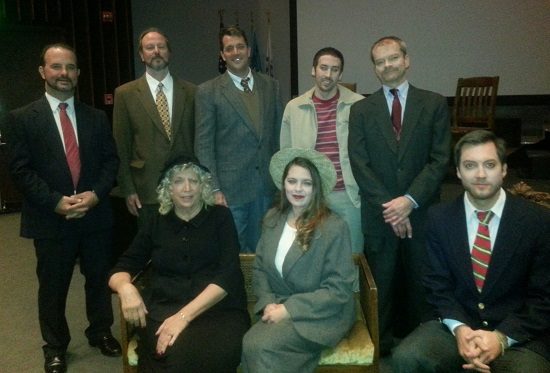 It is so fitting that a play about the British cryptanalyst and trailblazing mathematician, Alan Turing,  who shortened World War II by breaking Hitler’s U-boat Enigma codes and is considered the “father of the computer” would be performed on the campus of the science-oriented Johns Hopkins University Applied Physics Laboratory (APL).

Also fitting is that Breaking the Code by Hugh Whitemore and based on the book Alan Turing: The Enigma by Andrew Hodges, is being presented by APL Allies in the Workplace—an APL employee group that advocates for a non-discriminatory and diverse working environment, specifically for issues of importance to LGBT community and supporters.  For as much as Turing was a favorite of Winston Churchill because of his mathematical genius in heroically helping Britain during World War II, he was a homosexual—and unashamedly so—during a point in time when such behavior was deemed illegal.

Turing performed top-secret work for Churchill’s Government Code and Cypher School.  Following the war, he was determined, almost obsessively, to create a machine with a brain, which eventually became the computer.

After a run in the London West End beginning in 1986, Breaking the Code ran on Broadway for six months from November 1987 to April 1988 earning three Tony Award nominations.

Under the guidance of veteran director and theatre critic Patti Restivo, the fine cast allows the audience to peer into the mind of Turing, played eloquently by Mark Allen, and how his love of mathematics, information systems and men affect himself and those around him.

Though the Kossiakoff Center is modern, roomy and quite beautiful, it is not a conventional theater with all the technical conveniences that normally come along, such as high-tech acoustics and adequate dressing rooms. Instead, it’s an auditorium with a decent-sized stage, good lighting and a large projection screen upstage, which figures prominently in this fascinating true story.

Designed by Michael Hartsfield who also plays the role of John Smith, the stage is efficiently set up in five separate clusters of tables/desks, chairs or love seats with period telephones and other props, each accommodating two to three persons per scene.  Some furniture groupings are on platforms changing the eye level of the action when a new scene emerges.

Adding to the texture of the visuals is an assortment of slides that are projected on the big screen representing exterior shots of the buildings where the action occurs on stage.  Included on each slide is the identification of the building and the date that the scene takes place, which comes in handy during flashback scenes.  This is a superb device that Ms. Restivo employs that provides context to the dialogue.

Breaking the Code opens with Alan Turing reporting a burglary of his Manchester home.  But he offers inconsistent information, and Detective Mick Ross, played splendidly by Eric Henry, becomes suspicious.

Backed into a corner by the police questioning, Turing reveals that one of the subjects of the investigation is the 19 year-old Miller with whom Turing admits to having a sexual affair.  Det. Ross feels he has no choice but to have Turing prosecuted because “the law’s the law” despite Turing’s passionate argument that it was consensual and in the privacy of his home.  That law, which was created in 1885 to target homosexual men, caused Turing to be convicted of gross indecency, effectively destroying his career.

Turing seemed to be out as a homosexual to everyone but his mother.  He admitted it to her in a delicate, emotional conversation when he had no choice but to reveal his impending jail time, which turned out not to be lengthy and he was ultimately put on probation.  But he had to endure doses of drugs to deal with his homosexuality and that played a life-changing role at the end.  Had Turing’s homosexuality been known during the war, the outcome could have been drastically different, so said his colleagues.

Although Mark Allen’s previous body of work has been exclusively musical, having appeared locally in RENT, A Chorus Line and Damn Yankees as examples, his first turn in a dramatic role is outstanding.  He portrayed the charming and brainy Alan Turing with great skill and effectively met the challenges of replicating Turing’s British accent and stuttering problem.  A presence in virtually every scene with a ton of dialogue, Mr. Allen scored high marks with his performance.

A notable performance was also given by veteran theatre performer Maureen Rogers as Sara Turing.  She could have been any mother of a gay son who just learned of his sexual orientation.  Ms. Rogers evoked empathy from her tender portrayal of Sara  and was a joy to observe.

Eric Henry, who most recently appeared in the Victorian Lyric Opera Company’s production of  Our Boys, its entry in the 2013 Capital Fringe Festival, comes off as totally believable as the serious-minded, earnest detective.  His encounters with Allan’s Turing are intensely dramatic and executed flawlessly.

“Allies in the Workplace decided to produce this play because we want to recognize the value of the talents and intellect of all contributors in an organization,” says former Allies in the Workplace President Linda Kress-McDonald, who makes her acting debut in this play and who  initiated producing the play at her workplace. “If that’s not done simply because of someone’s sexual orientation, talent walks out the door. In Turing’s case, the world failed to benefit from the incredible contributions that Turing had yet to offer.”

After discussing the proposal with co-workers, Ms. Kress-McDonald and the other members of Allies in the Workplace were inspired to bring Turing’s heartfelt story to a broader community.  Laurel Mill Playhouse was credited for assisting with the casting, loaning the furniture and props as well as providing rehearsal space.

Breaking the Code is a very proficiently directed, staged and acted play with a strong historical context that is well worth the visit.  There is no admission cost, adding more incentive to enjoy this theatrical experience, but reservations are recommended.

Running Time: Two hours and 45 minutes with a 15 minute intermission.

Advisory: The play contains adult themes and language and is not recommended for children.