Theatre Review: ‘God’s Favorite’ by The Montgomery Playhouse at The Arts Barn 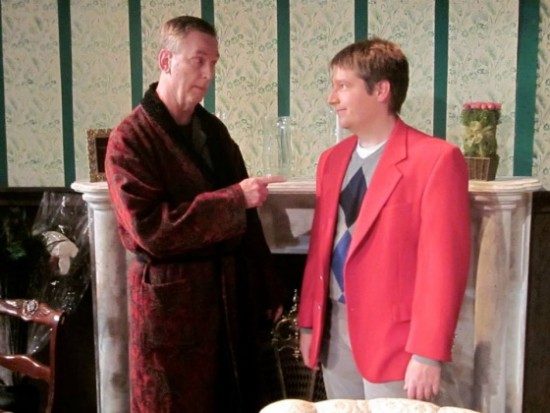 Neil Simon’s God’s Favorite is a comedic modern-day rendering of the Bible’s Book of Job with touches of Jesus’ parable of the Prodigal Son. This is serious stuff to be laughing at, but Simon pulls it off with his signature skill at portraying the painful as seen through the lens of human silliness.  It’s refreshing. The effect is therapeutic and after the show we head home inclined to laugh at our own troubles, while our blood pressure settles to low ebb and our serotonin flows.

Simon’s play is in good hands with the actors of The Montgomery Playhouse as guided by director Ed Starr.  Depicted is the story of a devout and staunch follower of God, Joe Benjamin, who is energetically portrayed by Ted Culler.  He is a rich manufacturer of quality card board boxes who gives to charity half his fortune yearly only to have his wealth doubled each following year.  A present day Job, he is God’s favorite.

Enter God’s messenger Sydney Lipton.  Played by skilled and well-seasoned comedian David Jones, he informs Joe that the Devil has provoked God into testing Joe’s devotion.  He will be subjected to misfortune after misfortune, affliction upon affliction, unless he renounces God.  But Joe, our hero, refuses.  The calamities follow and by play’s end his factory and his mansion have burned down, and he is left destitute, ravaged, a limping, ragged invalid.  Still he refuses to renounce his beloved Creator, but comes close when his prodigal son returns home blinded.  The resolution is uplifting.

But how can all this be funny?  Much less hilarious?  Well, Simon generously gives us clowns.  The first of these are Joe’s twin teenagers Ben and Sarah, acted amusingly by Thaddaeus Fillmore and Anne Vandercook.  Essentially they are idiot gnomes and fun to watch.

Then there’s Joe’s wife, Rose, skillfully played with charm by Kim Busch.  She is an idiot materialist, dripping jewelry, flapping fake eyelashes, clutching her jewel box, later appearing in a gigantic fur coat and triumphing on a TV game show.  She’s a chuckle.

Less clown-like are the servants, Mady and Morris, depicted by Joyce B. Wright and Ed Klein.  Wright’s Mady is performed against type as urbane and aloof, while Klein’s Morris clowns as a proper English butler.  Though Wright’s reserve diminishes the humor, Mady’s prayer for the stricken Benjamin family is movingly powerful. 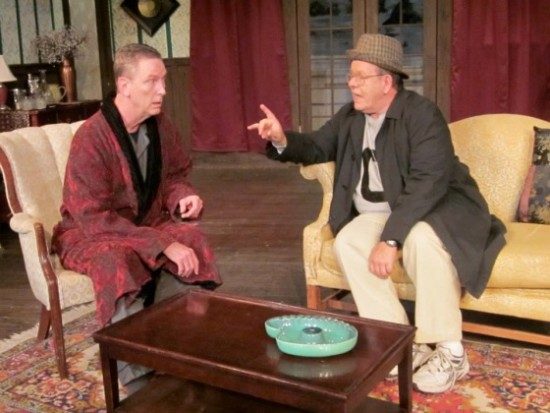 Not a clown though is Joe’s drinking, carousing son David, played wittily by Marc Pardee.  Defiant of his father, he speaks in wisecracks, building the humor and thought of the play.  It’s interesting though that despite Joe’s reverent nature, he denigrates his son at length drilling him as “a drunken bum” of no worth or accomplishment.  Is this really the behavior of a favorite of God?  Culler could give Joe some depth, flinching when he realizes his words are essentially sinful and disliking himself for saying them.  God would no doubt appreciate this in his favorite.

Sidney Lipton the messenger of God is also a clown.  But he is more three-dimensional, more complex, a very atypical angel fond of drug use and prone to deceit, yet not evil.  Jones wisely doesn’t go for big laughs when portraying him.

A problem though in the performance is the direction that allows Culler to over-extend himself in the first part of the play, depicting Joe as a buffoon, often mugging an open-mouthed, wide-eyed moronic face and pitching for hilarity.  It falls flat.  Director Starr would be well advised to have Culler tone it down, to vary the pitch of his voice and play the straight man, portraying Joe as thoughtfully as possible given all the genuine and intended clowns on stage.  Let the humor happen naturally.  Fortunately Culler’s performance turns brilliant later in the play when depicting Joe beset by itches everywhere on his body, thrashing and contorting to scratch them all.  The actor hits his mark here and his performance throughout the rest of the play is more real, less posturing and quite excellent.

Alas, don’t expect to be laughing uproariously during this performance of God’s Favorite.  The audience titters but does not roll in the aisles.  Expect rather to be more quietly amused and puzzling over the implications of this modern rendition of the divine mystery of Job.

At The Arts Barn in Gathersburg, Maryland, God’s Favorite runs November 8 through 24, Friday and Saturday nights with a Sunday matinee.  Tickets can be purchased calling 301-258-6394 or online.