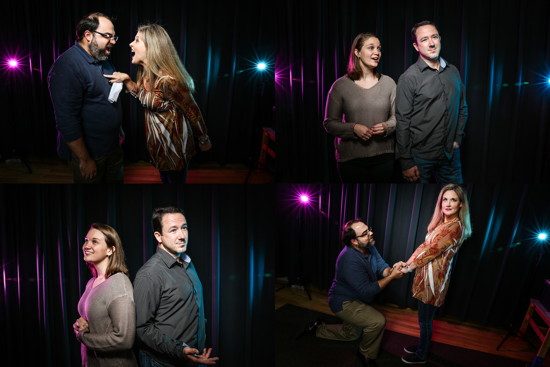 A classic 1950s musical, Guys and Dolls is based on two short stories by Damon Runyon that brings to light the New York underground of gangsters and gamblers. The music and lyrics were originated by Frank Loesser and book by Jo Swerling and Abe Burrows. Rockville Musical Theatre’s production at the F. Scott Fitzgerald Theatre is directed by Eric S. Scerbo, produced by Teri Klein Allred, musical direction by Valerie A. Higgs, and choreography by Sara Schabach.

There are two main storylines to follow in Guys and Dolls:  The engaging Nathan Detroit played by Jacy D’Aiutolo manages the longest running and permanent floating crap game in New York. While desperately trying to find a place to roll the dice he is also trying to deter his girlfriend of fourteen years from becoming his wife. Miss Adelaide, played by Sara Charbonneau, is done waiting, especially since she told her mother in several letters that they’ve been married 12 years, have five kids and a sixth is on its way. The character of Adelaide is the comic-relief as Charbonneau plays her as a ditzy blonde bombshell that is wiser than she lets on.

It’s an enjoyable production for all ages.

The other story is the undeniable relationship and chemistry developing between Save-a-Soul Mission’s leader, Sarah Brown played by Kathleen Riddle and high-roller Sky Masterson played Christopher Overly. The action revs up when Nathan bets Sky that he can’t get Sarah to go to Havana with him for dinner.  The bet is $1000, just what Nathan needs to secure the Biltmore Garage for his game location.

Around these two intertwined plot lines are popular musical favorites like, “Guys and Dolls,” “Luck Be a Lady,” and “Sit Down You’re Rocking the Boat.” Overly is suave in his role as Sky and sings like the crooners of the era. Riddle is outstanding, hitting all the high notes and is inspiring when she teams with Charbonneau in the entertaining duet, “Marry the Man Today.”

The instrumental number, “Havana” is a real treat with the ensemble cast mixing it up with a bit of salsa dancing and “The Crap Game” choreography seems to be a combination of Michael Jackson’s “Beat It” and “West Side Story.” These two numbers contribute in moving the storyline forward.

The real surprise is Gary Carl Fackenthall who plays Arvide Abernathy, Sarah’s grandfather. Fackenthall has a voice that had a few patrons around me saying, “Wow!” when he sang, “More I Cannot Wish You.”

The Mission Band is comprised of Sarah Richards (Agatha), Steven Quillen (Calvin), Elsbeth Clay (Martha), and Sonya Tavitian (Hilda). Aetna Thompson takes on the role of General Matilda B. Cartwright, who wants to close down the Mission.

The set is a series of framed rectangular pieces that are moved around and strategically placed to depict Broadway, the Mission, the Hot Box Night Club, under New York City and Time Square. The light accentuates the set to determine the time of day and enhance locations and ambiance.

Guys and Dolls is an upbeat production about hospitable mobsters and their frazzled dolls. The high energy feeds both the conflict between Sky and Sarah and the amusement between Adelaide and Nathan.  It does demonstrate that gals love their bad boys but also that bad boys can turn good. It’s an enjoyable production for all ages.

Guys and Dolls runs through November 16, 2013 at Rockville Musical Theatre, Tickets can be purchases at: https://www.r-m-t.org/tickets/