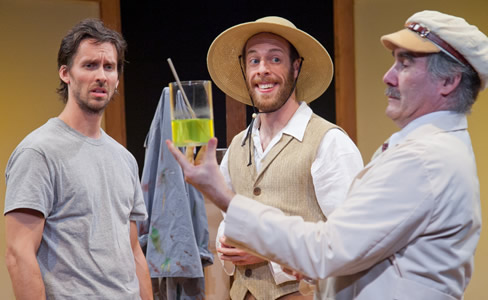 What does it mean to be creative in our times? How do we capture authenticity in a world of fakes and forgeries? Is there any originality left to imagine? Inventing Van Gogh, now at Washington Stage Guild through November 24, confronts the audience with these questions and others, through the lens of painter and Van Gogh hater Patrick Stone.

Stone, played by Christopher Herring, is the canvas around which the play revolves, while the catalyst for the story is a commission from unscrupulous art dealer René Bouchard (played by Brit Herring) to manufacture the last self-portrait Vincent may have ever painted. The dilemma of whether to accept the commission triggers a range of responses from Stone, from self-righteousness to resistance to resentment, even as the Sunflowers painter himself, played by Ryan Tumulty, materializes in Stone’s studio.  He is an apparition at once a projection of the future and a ghost from the past.

…a treat for art lovers

Much of the first act is consumed as writer Steven Dietz makes sure the audience has the necessary backstory. Exposition is provided by the artsits’ satellites, the father/patrons Dr. Jonas Miller and Dr. Paul Gachet (played by Lawrence Redmond); the realist/opportunists, Bouchard and Paul Gauguin (played by Brit Herring); and the girlfriends, Haley and Marguerite (played by Jessica Shearer), who in both cases are also the daughter of the patrons. Humorous and poignant monologues and fragmented exchanges of dialogue that reveal the intricate web of connections keep the plot moving, until Stone and Van Gogh confront each other directly in the final scene of act one, the most captivating of the play.

In the second act, more encounters between the artists delve deeper into the questions troubling Stone, as the last passages of Van Gogh’s life, which ended in suicide, are recounted. Stone and Van Gogh face off, each one a prisoner of his time. One has no choice but to be who he is, and is literally confined by it, as Van Gogh was committed for a time to a mental institution. The other is inundated with choice, and yet paralyzed. The dilemma is captured as Stone accuses Van Gogh of not being an artist: “You’re painting too quickly!” he snarks. “You’re looking too quickly,” Van Gogh replies. 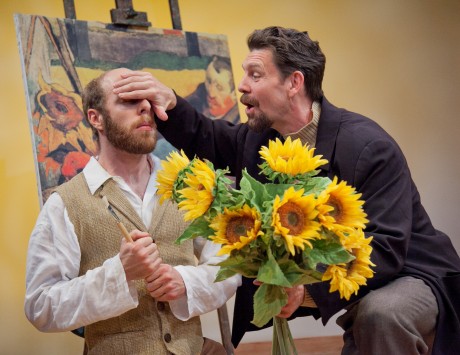 For the most part, each of the performances drew the audience into their respective characters, capturing the audience’s attention with what is not easy material to grasp. Tumulty, in particular, brought Van Gogh to life as he walked in from the audience in his signature straw hat. Bouchard/Gauguin provided a foil for all the earnestness, which isn’t to say there weren’t moments of laughter, particularly when Christopher Herring delivers some of his crispest lines. Redmond, especially as Dr. Miller, was a likely art professor, delivering not only fabulous facts but frank criticism laced with new challenges for his student. It was harder to identify with Shearer’s characters, both of whose longings, unlike those of the men, were for a father’s love and attention, something already lost and impossible to regain.

Simple but detailed costumes and distinctive styling help immensely in taking the audience back and forth from the 1880s to the early 2000s on a set that consists of barely more than two canvasses of light and an artist’s easel. And while the play ends without resolution to the questions it raises—that would be a tall order—director Steven Carpenter and his cast and crew have created for artists and others a space of their own to contemplate them; not to mention that bringing Van Gogh to life as more than just the hand behind his famous canvasses is a treat for art lovers in itself.

Running time: Two hours and 15 minutes including an intermission.

Advisory: The play contains themes of suicide and some explicit language.