Theatre Review: ‘King John’ by WSC Avant Bard at Theatre on the Run 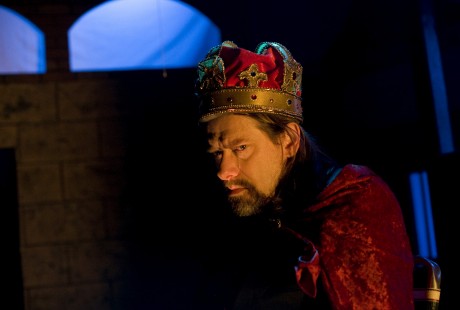 …a rare and excellent performance

Who better than William Shakespeare to characterize in a single line our ostentatiously wise but inwardly crazed political leaders, ancient and modern, and the deadly infernos they produce?  And who better to convey military madness than the accomplished players of the Washington Shakespeare Company under the visionary direction of  W. Thompson Prewitt?  Their quite delightful production of this clever and powerful seldom-seen play is a welcome relief from endless Romeo and Juliet’s and all the other rehashed standbys.

The play begins intriguingly in a modern-day basement fallout shelter. As hysteric air raid sirens scream, a family hunkers down for the worst.  One, a girl, reads despite the din.  Another, a young boy, plays with miniature knights on the ramparts of a toy plastic castle.  In a fine interpretive touch, the play unfolds as his fantasy. 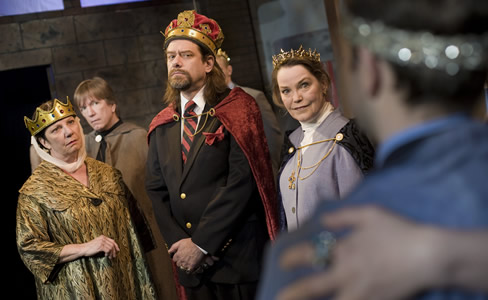 Enter King John, acted winningly by Ian Armstrong.  This king will resort to anything including torture and murder to hang onto his throne.  Sound familiar?  His crown is contested by his nephew and the French monarch who march to bloody war about it.  Armstrong with his ever-fluid facial features deliciously depicts John as both cunning and bumbling – as lofty monarch and shifty-eyed clown.  WSC’s costumer Elizabeth Ennis dresses him well in a dark blue Prince Charles-type business suit, his power tie in a Windsor knot, with regal cape and ample crown, a silk handkerchief peeping from his chest pocket — his outfit indicative of both medieval and modern.   In all fairness though to Prince Charles, the resemblance ends there as Armstrong is bearded and long-haired.  A bit seedy.  Similarly, the young boy, played appealingly by fifth-grader Ethan Ocasio, with khaki shorts, preppy blazer and red tie, suggests William and Katherine’s newly-arrived Prince George given a few years.  The parallels to the current House of Windsor, however, are not overplayed.

There are two other great female roles as well.  Rebecca Swislow in a mesmerizing performance makes very real Princess Blanche’s turmoil and distress over the bloody battle that breaks open like an infected wound on the day of her wedding.  In an equally powerful performance, Anne Nottage’s portrayal of Lady Constance’s madness over the capture of her son Arthur is stark and poignant.  In nights ahead, there may well be spontaneous applause for Nottage’s rant, given a properly responsive audience.  The same goes for a standing ovation at curtain call for Armstrong’s King John for all his merry villainy — and George W. Bush-style smirking.  In fact, they all deserve the salute.

Noteworthy performances abound.  Cardinal Pandulph, as the pope’s reverentially diabolical emissary portrayed by Christopher Henley, is exquisitely calculating, manipulative and wicked.  Sun King Davis as Austria is fiercely menacing, even after he loses his head.  William Hay’s Lewis the Dauphin is both regal and comic, with crown teetering on the back of his head.  Chuck Young as Chatillion captures well the spirit of a messenger of ill news who might lose his head.  Kim Curtis portrays Essex with gaunt elegance.  Slice Hicks imbues would-be torturer and executioner Hubert with earnest humanity, despite himself.  Connor J. Hogan’s Arthur is swishy fun in the play’s somewhat comic first half and fatally vulnerable when the play turns dark in the second half. 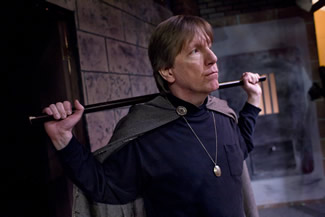 It all ends badly, of course, with armies decimated, a queen, prince, and count dead, and King John poisoned.  Whatever might be said of old John, if not for all our brave, posturing, outwardly wise, self-serving, ultimately mentally deficient leaders — at least he died well.  Take heart though: A young, still innocent Prince Henry appears to take his place.

Theatre aficionados take note:  this is a rare and excellent performance to add to your collection.

Running Time:  Two and a half hours with one intermission.