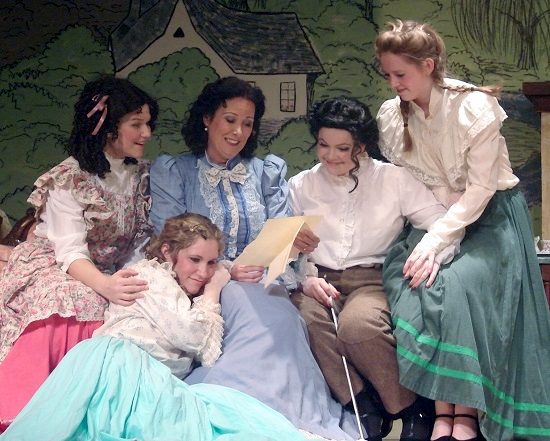 “Jo’s ambition was to do something very splendid; what it was she had no idea, as yet, but left it for time to tell her…” Jo is the central character in the classic novel Little Women by Louisa May Alcott whose story is now adapted into a stage musical suitable for the whole family.

For those seeking to relive the feeling of young love through these little women and their young suitors or those who wish to hear some songs and voices that are little gems, then ‘Little Women’ may be your ticket to an enjoyable evening at the theatre.

Since 2013 marks the 150th Anniversary of the Battle of Gettysburg and President Lincoln’s Gettysburg Address, it seems appropriate that the St. Gabriel’s Miracle Players is producing this musical. The Broadway production of Little Women opened at the Virginia Theatre on January 23, 2005 and closed on May 22, 2005 after 137 performances.  After watching the musical, the short run on Broadway may have been due to the book adaptation by Allan Knee, the music by Jason Howland, and the lyrics by Mindi Dickstein.  While there are a few quality songs in the show, too often the songs are drippy, like  “Small Umbrella in the Rain” (no pun intended).  There are also not enough recurring musical themes to tie it into a cohesive musical story.  In this case, fewer songs and more story and dialog would have made it more powerful. 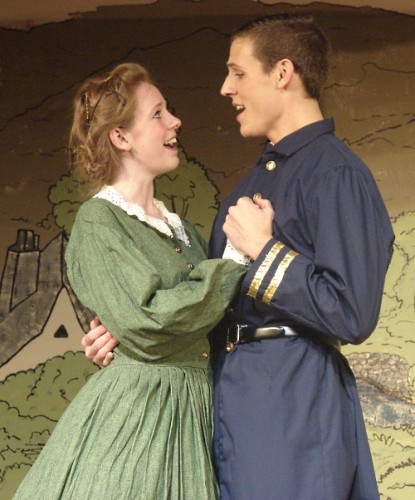 With that said, Little Women has some little gems.  In the song “Five Forever,” the characters are brought to life by the lively and tuneful music.  The song is about the four sisters finally allowing Laurie, their next door neighbor (Paul Kennedy) to be the brother that they never had.  Enhanced with light choreography by Kristin Rigsby, “Five Forever” is easily one of the highlights of the show.

The song “More Than I Am” features the talents of Laura Whittenberg as Meg and DJ Wojciehowski as Mr. Brook.  What made this song so special was the undeniable chemistry between the two performers. As DJ sings “If you could find it in your heart. If you could love me as I love you,” Laura does a great job at reacting to his bold statement.

Michelle Hill is wonderful as Jo, a feminist who breaks all the rules, doesn’t want to get married, wants to make money and make a name for herself.  This developed character also wants to wear the pants and have the same opportunities that the men are having.  Michelle puts that character’s determination into her strong singing voice, most notably in the song “The Fire Within Me.”

The modest set design by Liz Kanner features a country setting painting as the backdrop and set pieces like chairs and a fireplace to help set up the scene.   Costumer Laural Clark makes the little women look good in their dresses, paying attention to different colors and styles to suit the ladies. 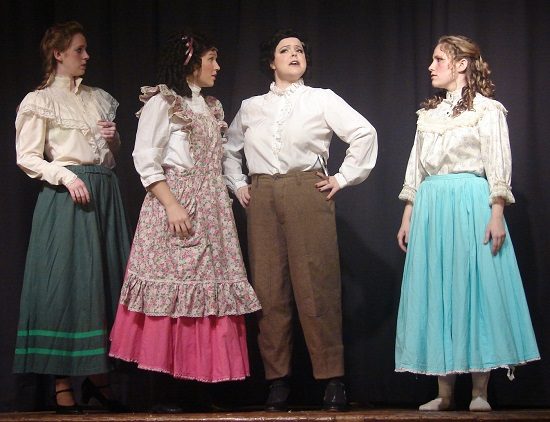 This production would not have been as good if it were not for the live orchestra conducted with authority by Tania Bindhoff-Frieswyk.  The orchestra was in tune, kept in sync with the singers, and rarely overpowered the vocalists thanks to the sound crew: Rev. Tom Phillips, Kristin Rigsby, and Heidi Toll.  Everyone in the fourteen piece orchestra was fabulous, but I wanted to point out a few members, including Ruben Lopez and Sharon Jollie on the violin, Mari Hill on the bass clarinet (among other instruments), and Matt Elky and Mary Haaser on the oboe and clarinet.

First time director Kevin James Logan assembled a really good cast and crew who all worked very hard to bring this classic novel to life on stage.  For those seeking to relive the feeling of young love through these little women and their young suitors or those who wish to hear some songs and voices that are little gems, then Little Women may be your ticket to an enjoyable evening at the theatre.

Running Time: 2 hours and 40 minutes with one 15 minute intermission.