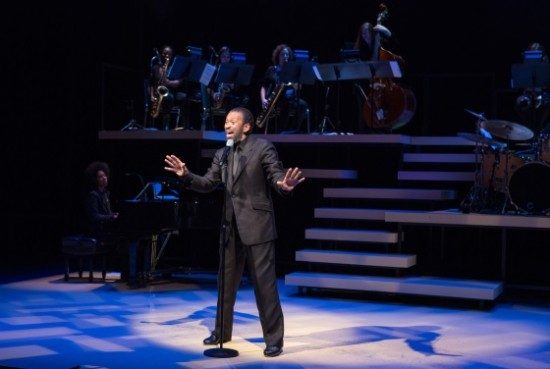 Dancer/choreographer/actor/singer Maurice Hines will be turning 70 in a few weeks, so it’s only fitting that his new show Maurice Hines is Tappin Thru Life, now playing at Arena Stage’s Kreeger Theatre, would be a retrospective of some of the high and low lights of his career.

He was part of the act known as Hines, Hines and Dad which got his brother Gregory Hines and him noticed by Johnny Carson. They would appear on the Tonight Show 30 times.

…one of the words finest tap dancers.

With the help of Darrel Maloney’s projections, Hines tells us many stories from his career. When playing in Las Vegas, his act was booked in the first all inclusive hotel, which meant whites and blacks were welcome. Yes, it was off the strip, but it still was an important gig. Tallulah Bankhead invited them to swim one night in the pool at her hotel which was a white only place. Bankhead said she would not perform if her friend Pearl Bailey was not allowed to swim in the pool. The hotel allowed it but as soon as Bailey finished the pool was drained. There are also some amusing anecdotes about his family and a touching tribute to his brother Gregory, where Maurice dances with an empty spot light as if it is his brother. These are just a few of the things that happen in the first 65 minutes of Hines’s 90 minute show. 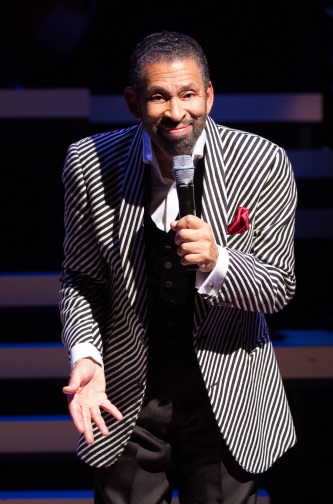 Hines sings with ease his way through many familiar standards like “Come Fly with Me,” “Luck Be a Lady,” and “Smile,” but there is very little tap until later on in the show, actually 65 minutes in. As Mr. Hines is turning 70 soon, I don’t expect him to tap the entire show as that would be a lot to expect of anyone. His singing and audience rapport are both fine and very much polished but I just wanted a little bit more of what he is really known for.

As you might remember, Hines’s last appearance here in DC was in Arena Stage’s production of Sophisticated Ladies. For that show, Hines discovered the tap dancing dynamo team of the Manzari Brothers. Once John and Leo Manzari took the stage the whole show kicked up a notch. These are two young boys with a huge career ahead of them. They can actually match Hines step for step and do so during a dance challenge where one dancer tries to outdo the other. As Hines likes passing things on to the next generation, his latest discovery the Heimowitz Brothers were also introduced to us. Max and Sam Heimowitz are just starting out, so I’ll just say that I will be very interested in watching them progress as they get older. It’s always good to see some fresh raw talent mature and grow.

Another highlight of this show is the Diva Jazz Orchestra under the direction of Dr. Sherrie Maricle. Playing arrangements by Nelson Riddle, Tommy Newsom, and Frank Owens among others, this all female group shows impeccable musicianship and has all the swing of the big bands of the 30s and 40s and their feature of Duke Ellington’s “Caravan” was a definite highlight. 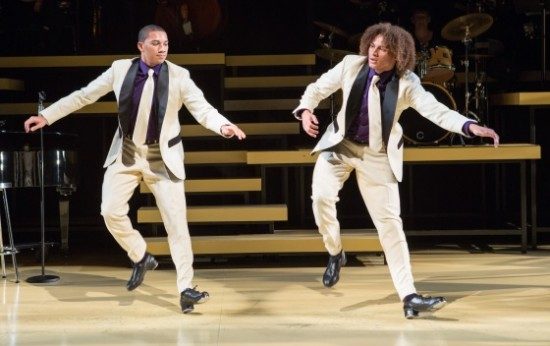 Overall Maurice Hines is Tappin Through Life is a lively and sometimes touching look at a man who has been entertaining us for a long time. If Hines and his director Jeff Calhoun can just add a little more tap into the proceedings, it will balance the show while showing us for a little longer what Hines is known around the world for, being one of the words finest tap dancers.

Maurice Hines is Tappin’ Thru Life plays through December 29, 2013 in the Kreeger at Arena Stage at The Mead Center for American Theater – 1101 Sixth Street, SW, in Washington, DC. For tickets, call the box office at (202) 488-3300, or purchase them online.