Martin McDonagh’s The Pillowman, now playing at Silver Spring Stage, looks deeply at innocence violated; it looks disturbingly at the creative mind’s response to that violation; it looks hopefully to some break in our cycles of brutality.

Silver Spring Stage’s production of this award-winning play does it more than justice.  With a superb cast and tight direction, this macabre folktale unfolds with an engrossing sinisterness that not only illuminates its emotional underbelly but its larger intellectual frame as well.  The comic nuances that more than occasionally burst through the surface are as authentic as they are hilarious.

Directed with a sure hand by veteran director Craig Allen Mummey, The Pillowman is a “once upon a time” play set in a faraway totalitarian dictatorship, a dictatorship in which children are being brutally tortured and murdered.  The Brothers Grimm would be proud (not Disney with his childish revisions). 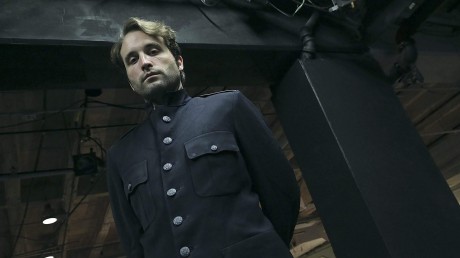 The police are questioning an emerging young writer of short stories.

The “good” cop, Tupolski, played with dead pan expressionism and great comic timing by Lars Klores, wants to know if the writer knows what he knows.   From stories to a lunch pail with gruesome evidence, he keeps asking questions.

The “bad” cop, Ariel, played with feverish intensity by Kyle McGruther, wants to cut through the questioning and just torture this sick sadistic writer to death.  These two cops are straight out of Kafka’s The Trial in spirit and style.

The writer, Katurian K. Katurian (yes, even his middle name is Katurian), does not know what these cops are talking about.  Played by Chad W. Fornwalt, the writer insists that all he does is write stories, nothing more.  If need be, if by some oversight on his part, he has included some questionable political material in them, he will change them.

Mr. Fornwalt’s performance is superb as the gifted young writer who, though emotionally damaged, does his best to act ethically in the world.  And the role is no small challenge either.  A roller coaster ride from beginning to end, Fornwalt gives the character real verve as he pleads for understanding, and real love as he cares for the loved ones in his life.

Katurian’s problem is that his stories frequently have children in them whose fates are both twisted and horrific.  The adults whose charge is to protect their children end up brutalizing them, terrorizing them, crucifying them, and more.  And now, like a bad dream, Katurian’s stories are being played out in life.

Katurian’s brain-challenged brother, Michal, played with great authenticity by Chris Daileader, has been brought in for questioning.  A child’s toes have been found in his room.  Michal does not want to suffer.  He admits to everything.

The beauty of McDonagh’s play is that it has almost nothing to do with totalitarian dictatorships. In the same way Grimm tales have little to do with actual kings and princesses, Pillowman uses setting to create a larger frame.  That frame is the relationship between the tale of fiction and the real life events that shape our lives. 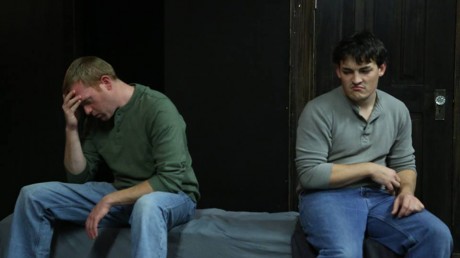 Stylistically, the play shifts back and forth between the drama of the writer being interrogated by the police and enactments of the writer’s short Grimm-like tales.

David Flinn and Malinda K. Smith play the masked Father and Mother to their folktale Child, played by Kelsey Murray.  Her turn as the bearded girl Jesus is marvelous.

Mummey’s production team did a fine job, with Andrew Greenleaf’s multi-layered set providing for flexible staging and Harlene Leahy iconic clothing making the characters more than representational.  Lights were sure-handedly designed by Kevin Boyce as was the sound by Patrick Hughes.  A bit of brutality was choreographed superbly by Todd Fleming.

I would never assert that The Pillowman is for everyone.  Its folktale conflation of the grotesque with the comic can feel too much like a guilty pleasure for some, but The Pillowman is most definitely Martin McDonagh at his best.  The play fiercely combines emotional honesty with intellectual astuteness, with just that touch of humor to make it all taste so sweet.

This production is a raging success!

Running Time: 2 hours and 30 minutes, plus an intermission