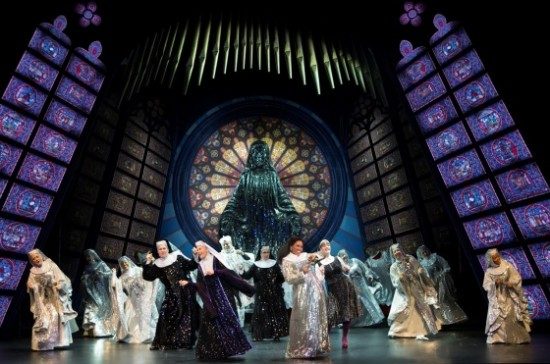 Sister Act started out as a blockbuster film starring Whoopi Goldberg, and then spawned a successful sequel as well. It is only natural that you would capitalize upon your success and turn a hit property into a stage musical. In 2009, with Goldberg serving as producer, Sister Act the musical opened in London to rave reviews. It then transferred to Broadway in 2011 where it was nominated for five Tony Awards. Featuring a score by Alan Menken (Music) and Glenn Slater (Lyrics), the music is enough to make you rise up and take note. Add to that a star turn by Ta’rea Campbell as the singer hiding in a convent from a mobster after witnessing a murder and a bunch of singing nuns with plenty of soul and rhythm and Sister Act, now playing in the Kennedy Center’s Opera House, is a real crowd-pleaser.

…a toe-tapping, holier than thou night in the theatre.

Cheri and Bill Steinkellner’s book is as follows. We are in Philadelphia in the mid 70’s. Deloris Van Cartier (Ta’rea Campbell) is a singer trying to hit it big. She is working for Curtis Jackson, (Melvin Abston) a sleaze ball of the first degree. When Deloris becomes a witness to a murder by Curtis she goes to the police for help. There we meet a cop named Eddie Souther (Chester Gregory), also known as Sweaty Eddie. The two went to high school together. Eddie tells Deloris she must go into hiding until Curtis’s trial and with that she is taken to a church that is on the verge of extinction. There we meet Mother Superior (Hollis Resnick) who is an old school type of nun that believes God will make all things good, even though two antique dealers are on the verge of making a deal to buy the church. When Deloris single-handedly turns the nun choir from what sounded like a 10th national bus-and-truck tour of The Sound of Music into a top notch group of singers, things start to turn around. The nuns even are asked to perform for the Pope. As you might imagine, Curtis and his henchmen find Deloris and… but that’s all you get. 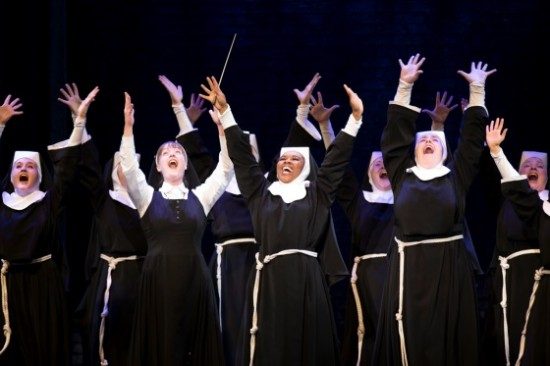 The show rises and falls on the actress playing Deloris, of course, and Ta’rea Campbell does not disappoint. From the moment she opens her mouth in the opening song “Take Me to Heaven,” Campbell rules the stage all night long. The eleven o’clock title song was just one of her many vocal highlights. Her acting matches her singing. It doesn’t matter who she is playing a scene with because she has her character down and knows how to play it without becoming overly screechy or stereotypical.

Hollis Resnick as Mother Superior is almost as successful in her portrayal. I did enjoy her acting but did not find her singing as strong as I would have liked in her feature called “Haven’t Got a Prayer.” What does work with Resnick’s performance is her comedic timing in scenes that feature the nuns and Monsignor O’Hara (Richard Pruitt). The scene in the confession room was quite funny.

To do this show properly you must have a strong nun ensemble, and this production definitely has that. There are two standouts for me though. First is the hysterical Florrie Bagel as Mary Patrick. Someone needs to give her a lead in something fast. Second is the nun who for me stole the show away from the leads. Ashley Moniz as novice nun Mary Robert has a number called “The Life I Never Led,” which for me is the best number in the score.

I very much enjoyed Chester Gregory as Eddie. Even though the male characters are not as well drawn as the females, Gregory does have an act one feature called “I Could Be That Guy,” which he performed very powerfully.

Alan Menken and Glenn Slater’s score ranges from Motown, to Gospel to Broadway showstopper types of songs. There are big production numbers like “Sunday Morning Fever” and Raise Your Voice” and quieter songs like “Bless Our Show.” This score is vastly better than what was to be Menken and Slater’s next Broadway musical, which also had religious overtones, called Leap of Faith. That one did not impress me at all, but I enjoyed the score a lot here because it varies throughout, which keeps it interesting to listen to. Helping matters are Doug Besterman’s orchestrations with dance music arrangements by Mark Hummel. His arrangement for the chase sequence between the nuns and the mobsters shows why Hummel has been at this for so long.

The band is conducted by Brett- Alan Huffman and contains thirteen musicians. Five (three keyboards, drums, bass) travel with the show and the rest are locally contracted. This means in every city the show picks up the brass, reeds, guitar, and percussion chairs, and the band generally gets a four hour rehearsal to read the show down. You would not know this by listening to this group because they sound really tight. 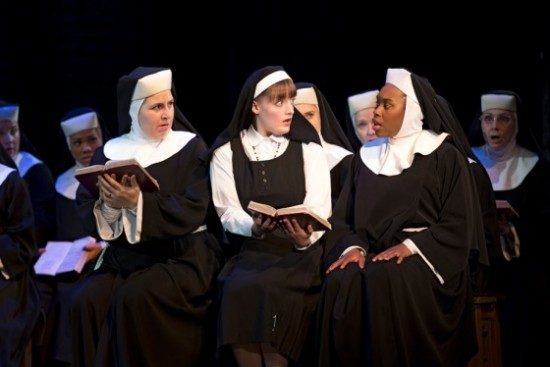 The only thing that is keeping this from being a first rate tour from top to bottom are the scenic elements designed by Klara Zieglerova. The fact that the show had to be scaled down for touring to more drops than hard pieces doesn’t bother me, because when you tour, the show has to be able to load in and out of venues fast. What I do take issue with are drops that look wrinkled and stuff getting caught up in the flies, possibly from being hung in the wrong pipe positions. This is a first national tour so those are the kinds of things I don’t expect to see. Everything else however looks great. From Lez Brotherston’s costumes that feature lots of habits and some funky period 1970’s clothing to Natasha Katz’s bright and colorful lighting design. Ken Travis has designed the show so you can hear every word in the Opera House.

Jerry Zaks’s staging is slick and clean while Anthony Van Laast’s choreography has lots of energy and vitality.

Despite the less than glamorous scenic elements and some tasteless jokes from Douglas Carter Beane, who wrote some additional book material, Sister Act is a show you all can enjoy. It doesn’t matter if you are Catholic because the show has something for everyone. Younger types will enjoy the singing and dancing and the adults will appreciate all of the talent on the stage. Sister Act won’t make you think you have been saved but it does offer a toe-tapping, holier than thou night in the theatre.

Running Time: Two hours and 30 minutes including one intermission.

Sister Act plays through November 10th 2013 at the Kennedy Center’s Opera House. Tickets can be purchased by clicking here or by calling  202- 467-4600