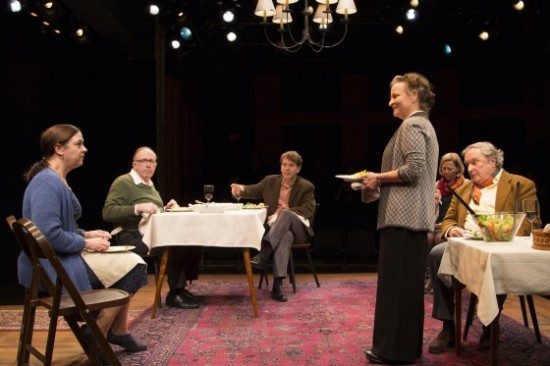 Sweet and Sad, the title of the second play in Richard Nelson’s Apple Family Plays, comes from Walt Whitman’s “The Wound Dresser,” a poem he wrote in reflection on the time he served as a nurse during the Civil War.  In Washington, DC, he daily cared for the wounded, both the recovering and the fatally so.

Nelson’s play takes place in that same small New York town of Rhinebech, with the same Democrat family, the Apples; again, a meal is being served.  The difference is the day: the 10th anniversary of the day two planes flew into the Twin Towers (this being New York, no mention is made of the plane that flew into the Pentagon.)

The difference is also the menu: on this day, the discourse moves beyond the political, entering instead into a discussion of national identity, of our aversion to challenging questions about who and what we are, and of the consequences of loss.

The Apple Family is also different.  The status quo has been shattered by personal tragedy, and the stress, tolerable in That Hopey Changey Thing, moves quickly into red alert as the economy stagnates, dreams fail, and lives shatter.

The results are emotionally staggering.  With Nelson’s Sweet and Sad, Studio Theatre accomplishes the cathartic.  With That Hopey Changey Thing playing the role of the set-up man, introducing the family and their struggles, Sweet and Sad closes us out, and it does so marvelously—an intellectually gripping, emotionally charged performance of national distress.

At the center of this “slice of life,” is middle sister Mirian, played with a haunting authenticity by Elizabeth Pierotti.  She has moved in with older sister Barbara, the steadfast Sarah Marshall turning in a relentlessly caretaking performance.  Mirian is now estranged from her husband.  The troubled daughter, introduced briefly in Hopey Changey, has committed suicide; the emotional turmoil has torn the family asunder.

…truly a unique piece of theatre.

We watch Sweet and Sad as if the “real” play happened before the curtain rose, and the drama has passed: the suicide over, the ferocious fights between mother and father, the blaming and accusations but a memory.  Privileged, however, we experience the lingering denouement, during which the characters reveal their anguish and disappointment, their hopes and dreams, and most importantly their questions about the future.

Set on the 10th Anniversary of our most recent national tragedy, what could be more fitting?

And again, the cast  excels.

Richard has now left his political job with Attorney General Andrew Cuomo and become a high-priced lawyer in Manhattan.  Rick Foucheux does a superb job of exuding the man’s guilt, a combination of added stress and a complex servitude.

Richard’s move into the upper class also adds a much needed class differential to the play’s dynamics.  This new tension is visibly felt as Mirian and Barbara struggle to make ends meet sharing their small family home.  Also, however, Jane and her on-again-off-again boyfriend, Tim, face the challenges of stalled mid-life careers. 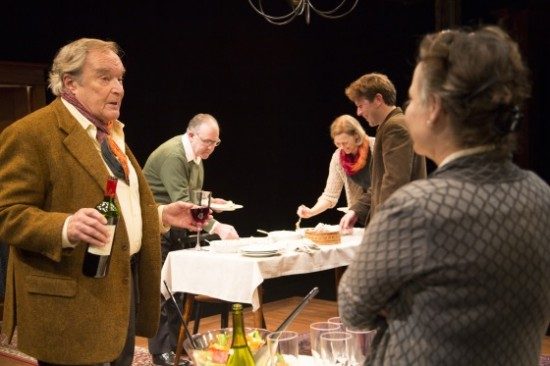 Kimberly Schraf does a fabulous job portraying this new Jane.  Not only is her relationship in a tenuously precarious state of ebb and flow, but her writing career—you will recall from Hopey Changeythat her study of American manners was being considered for publication by Random House—is going nowhere, as her book is still being considered by Random House.  The audience knows that at any moment she might breakdown and cry.

Jeremy Webb’s Tim also steps forward in this “act 2” of the Apple Family Plays, with Jane at one point praising him for his new waiter’s job.  At 43, Tim’s dream of a sustainable acting career is at a turning point, as the actor teeters on the edge of giving up acting all together. Webb gives us this new Tim, a man who now seems to live with tears in his eyes.

Finally, we have the ever present Uncle Benjamin.  Ted van Griethuysen’s performance, excellent in Hopey Changey, has only gotten better, as he adds an array of gestures and glances that reveal as much character as an hour of dialogue.  The energy that Griethuysen’s Uncle brings to the stage, in all its ahistorical wonder, serves as a perfect counterpitch to the somber tones of this gloomy anniversary get-together.

While the family dynamics engage us thoroughly, it is the social commentary that grabs us and leaves us grappling with questions of agency.

Loss is always painful.  Sweet and Sad positions its audience between Mirian’s personal loss and the country’s national tragedy and then asks us difficult questions about who is responsible and what is the significance of our response to human suffering.

As a result, if That Hopey Changey Thing focuses on our discontent with status quo political culture, Sweet and Sad moves our consciousness into the first stages of agitation.  We begin to question why we behave the way we do when tragedy strikes.

As Jane asked, we ask: what might we be hiding beneath the artifices of endless memorials, compensations, accusations, and vitriol.  Might such memes conceal more than they reveal?

Studio Theatre’s The Apple Family Plays is a repertory worth seeing in its entirety.  It is truly a unique piece of theatre.

Next up will be my Through Line column on the intersection between political discourse and Washington theatre.

Running Time for Sweet and Sad: 110 minutes without intermission.

The Apple Family Plays runs at Studio Theatre, at the intersection of 14th and P Streets, NW, Washington, DC, through December.  For tickets, click here.