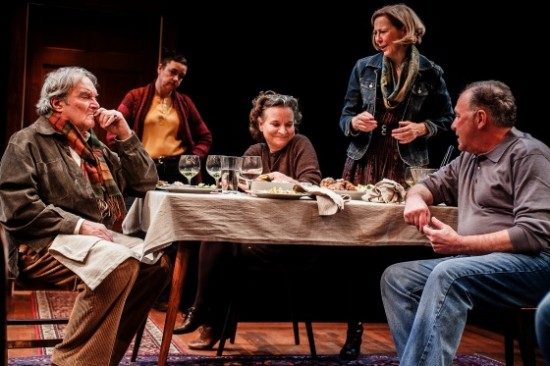 When Brazilian theatre artist Augusto Boal brought his politically revolutionary theatre of the oppressed to Europe and the United States several decades ago, he discovered that his techniques were not as effective in the developed world.  He discovered that the structures of oppression in the US were not so strictly the physical barriers that the poor in Latin America faced every day, barriers reinforced by the State and its police.  So Boal altered his techniques: he called his new method “the cop in the head.”

The first two plays from Richard Nelson’s quartet of Apple Family Plays, now playing at Studio’s Milton Theatre, do not follow Boal’s methodology: you won’t leave the theatre agitated and ready to change your world.  Their goal is the same, however: to expose the cop in your head, the cop that is monitoring your thoughts and reactions to the events taking place around you, keeping you in line.  That cop tell you what is acceptable, and what is not, politically and socially.

‘That Hopey Changey Thing’ offers us a chance to hear ourselves talk to ourselves about our political hopes and anxieties.

After watching the Apple Family Plays, you leave the theatre feeling like you have attended someone’s family dinner, with a little salad, a piece of chicken, some pumpkin pie.  The conversation was exceptional, the banter witty but never tiresome, the disagreements not quite ferocious, and the ideas quite satisfying.

On your walk home or to your car or as you wait for the next play to start, you will wonder: where have I met those folks before?  And then with a slightly queasy rumble inside your head you will remember this part or that part of the dialogue on stage and ask: why haven’t I thought of that before?  Why haven’t I asked that question before?

Though pure New York, The Apple Family Plays are all about Washington, not as it is, but as it should be: inquisitive, investigative, insightful.

If you care about the future of American political discourse, then these plays are for you.

This review will be written in three parts.  Part 1 will focus on the first play That Hopey Changy Thing.  Part 2 will examine Sweet and Sad.  Part 3 will be a Through Line column about the intersection of Washington politics and theatre.

That Hopey Changy Thing takes place in the small town of Rhinebeck, NY, 100 miles up the Hudson River from New York City, on Election Day 2010.  The Democrats in New York and across the country are facing a Tea Party juggernaut.

Two years prior, a man of African descent was elected president, signaling great change and promising even more.  The promises have proven more difficult than the rhetoric, with the election’s feel-good moment running head first into realpolitik, with its money and ego and lobbyists and power-brokers and scandals.

With the results of the mid-term election but hours away, everyone is on edge. An intimate Apple family reunion is taking place; a meal is being served, and Democrat politics is on the menu.

What makes Nelson’s That Hopey Changey Thing successful is that it is absolute “slice of life” realism; or should I say “slices of life;” and, as directed by Serge Seiden, those slices are a culinary treat.  The audience is not served up a story at the Apple residence; Nelson does not fall into the trap of even suggesting a through line of action that then rises to climax.  Rather, the audience gets a video-like essay on a family under stress at a particular moment in American history.   The stress is terminal, not purgative.  Each character endures it, finding no release. 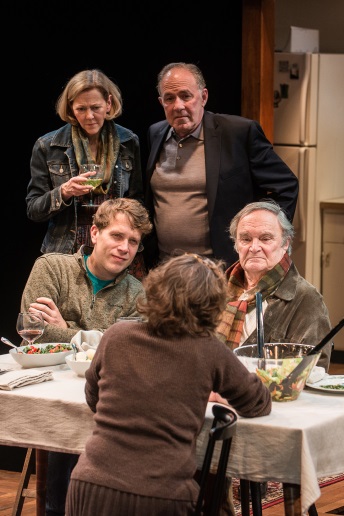 The buffet dinner at the Apple family home is divided into a dozen or so vignettes, marked by a chime and a light pulse, choreographed perfectly by composer / sound designer Erik Trester and lighting designer Daniel MacLean Wagner.

The set, by Debra Booth, is the very definition of elegant, in the aesthetic sense: a single door, a short corridor, a dining room table with a small flower vase under low light.  The costumes are finely designed by Helen Huang.

The play begins when the family matriarch, Barbara “the saint”—the high school teacher, aka the older sister, aka longtime Washington standout Sarah Marshall—enters and greets us with the slightest of nods, signaling to us that she is aware of our presence and our observation.

Other characters do the same; they enter, acknowledge our presence, and then go about the business of preparing for the meal that follows.

It is the meal that consumes us, or rather the “manners” that take place during it.  The youngest sister, Jane, played by Kimberly Schraf, is a social science writer and struggling mother.  She is researching a new book on manners, or social rituals and customs.  She wants to know what they reveal, or hide, about people and their identities.

This Apple family meal is Nelson’s laboratory: the slices of life offer us food for thought.

The other two Apple siblings are the lawyer brother Richard, played by Washington veteran Rick Foucheux, and the middle sister Marian, played by Elizabeth Pierotti.  Richard and Marian are the political Apples: Democrat operatives, with Richard working for the New York Attorneys General Eliot Spitzer and then Andrew Cuomo, while Marion is a stalwart in the local New York Democratic machine.

Around this quartet of siblings circle two outsiders of a sort, both theatre people, specifically actors.  Uncle Benjamin, played by Ted van Griethuysen, has recently had a heart attack and now only has a memory that goes in and out of focus. His outsider status is his amnesia.  And then there is Jane’s new younger-man boyfriend, Tim, played by Jeremy Webb.  Whereas Benjamin is an actor of significant past achievement, Tim is a middle-aged actor who, like most performers, struggles from job to job, hoping for a break.

This ensemble of superior thespians serves Nelson’s script to perfection.  We observe their antics as if they were a family that, on occasion, comes together to share a meal and some spirited conversation about politics and theatre.  It is not a stretch to believe that this collection of actors might indeed come together on occasion to do just that.  They seem that at home and that comfortable with each other.

Yet, each individual character offers us more than we get in this first play, which is fitting, since Nelson’s quartet, like in a longform TV series, offers us four different moments in each of their lives.

Ms. Marshall’s Barbara keeps her secrets well: I still do not know what those secrets are; but I feel positive she has some and that they have stewed for quite a while.

Mr. Foucheux’s Richard is not long for the world of Democrat politics: I cannot see him turning Republican per se, but his disillusionment is palpable.

Ms. Pierotti’s Marion wants nothing more than to believe in change: she a Democrat to delusion.

Ms. Schraf’s Jane seems on top of the world with her new, younger boyfriend: I know that flying high feeling cannot last.

Mr. Webb’s Tim is “an actor,” he continually asserts; but as Benjamin later says: someone needs to give an actor a role to play.  If no one gives you a role to play, what do you become?  We cringe each time wondering what Tim will become.

This then leaves us with Griethuysen’s Benjamin, the man who lives in the total present, and who seems so content.  If Barbara has secrets that she keeps well hidden, Benjamin has secrets that he cannot even remember.  We adore his ahistorical serenity.

The beauty of the Apple Family Plays lies in the intersection of the family’s historical fragments and the larger national history unfolding around them.  In That Hopey Changey Thing the political discourse might at times sound stolen right off C-Span’s National Journal call-in show, which is both a testament to its authenticity and a time-saver if you are not inclined to spend hours listening to phone calls.  It is the personalization of that discourse within each character’s narrative, however, that elevates it and the play beyond the everyday.

That Hopey Changey Thing offers us a chance to hear ourselves talk to ourselves about our political hopes and anxieties.

We are definitely the wiser for having done so. And it is the beginning of the conversation.  Sweet and Sad takes that conversation to a whole other level.

Running Time: 100 minutes without an intermission.

Advisory: Politics, but no religion

That Hopey Changey Thing plays in tandem with Sweet and Sad at Studio Theatre, at the intersection of 14th and P Streets, NW, Washington, through December 29.  For tickets click here.