Theatre Review: ‘The King and I’ at Olney Theatre Center 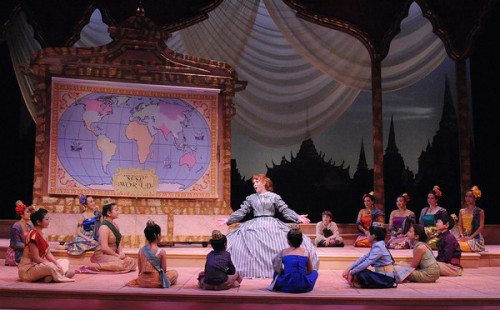 Eileen Ward (as Anna) and the cast of Olney Theatre Center’s production of ‘THE KING AND I.’ Photo by Stan Barouh.

Rodgers & Hammerstein’s The King and I has been entertaining audiences for over 60 years, opening on Broadway March 29, 1951, starring Gertrude Lawrence as Anna and Yul Brynner as the King.

Would you believe that Olney Theatre Center is even older than The King and I? On July 25, 1938, the theater opened its doors for the first time with a production of Ladislaus Bus-Fekete’s The Lady Has a Heart, which starred Elissa Landi of “movie fame.” 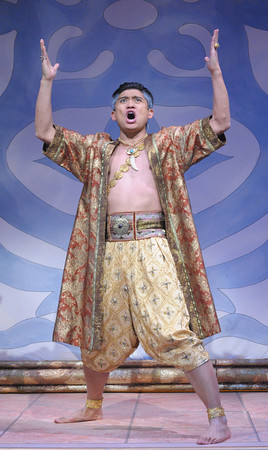 Paolo Montalban as The King in Olney Theatre Center’s production of ‘THE KING AND I.’ Photo by Stan Barouh.

Set in 1862 Siam, the King (Paolo Montalban) has summoned an English school teacher named Anna (Eileen Ward) to serve as the tutor to his many children and wives.  In the process of teaching, Anna also learns about the people of Siam (“Getting to Know You”). But the person who seems the most hungry for knowledge is the King who finds life “A Puzzlement.”

Eileen Ward stars as Anna Leonowens, the widowed Briton who is in Siam to teach the royal children.  Olney audiences may remember Eileen Ward as Rose in The Secret Garden and Abigail in 1776.  What makes her performance special is her dry sense of humor that she brings to the role.  Conversely, Paolo Montalban as the King is delightfully campy in his delivery of the comedic lines.  You may recognize Paolo Montalban as the Prince in the ABC/Disney TV movie of Cinderella. This is his 8th production of The King and I and his second time playing the King.  These two characters and performers could not be more different and that is why the casting works.

It is obvious that Artistic Director Jason Loewith and Director Mark Waldrop took great care in casting actors who not only looked the part, but could also act, sing, and dance the part.

The adorable children that were cast will especially please audiences during the famous “March of the Siamese Children”  in which the King’s children meet their school teacher Anna for the very first time in quite a majestic and charming fashion.

“Shall We Dance” and “I Whistle a Happy Tune” are well-known songs by Rodgers & Hammerstein.  But there is one special song that doesn’t get noticed as much, and is a hidden little treasure.  If you go to the show, I encourage you to listen for the song “We Kiss in a Shadow.”  It is sung by the forbidden young lovers Lun Tha (Eymard Cabling) and Tuptim (Yoonjeong Seong). Eymard Cabling’s tender singing voice expressed genuine love for Tuptim.  Yoonjeong Seong also impressed me with her pure sounding voice, singing with conviction.

Alan Ariano is realistic and strong as The Kralahome, the King’s prime minister.  In previous productions that I’ve seen of The King and I, I haven’t noticed this role as much.   At Olney, Mr. Ariano’s winning performance grabbed hold of me and made me take notice.

Sometimes there are performers that just put a smile on your face because of their natural, lovable personality.  This is the case with Ron Curameng as Phra Alack, the Interpreter.  Mr. Curameng’s facial expressions are priceless during the beginning of Act I where he is interpreting the words of Anna and The Kralahome. If he doesn’t put a smile on your face, I don’t know what will!

Last, but not least, I would like to mention Ron Heneghan who plays two roles in the show, though you wouldn’t realize it unless you looked in the program!  At the top of the show you will notice Mr. Heneghan as Captain Orton who manned the ship that brought Anna and her son Louis Leonowens (Henry Niepoetter) to Siam.  Later on he gets to show off his comedic skills all while being handsome and dapper as Sir Edward. 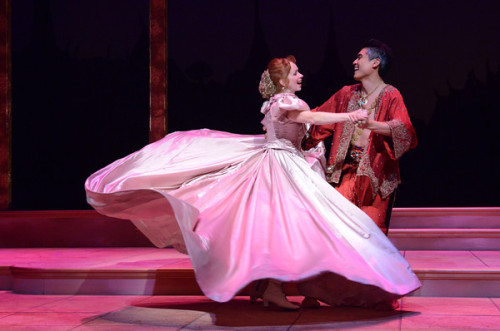 Shall We Dance? Paolo Montalban (as The King) and Eileen Ward (as Anna) in Olney Theatre Center’s production of ‘THE KING AND I.’ Photo by Stan Barouh.

The deceptively simplistic, yet stylized choreography by Tara Jeanne Vallee helps to tell the story.  She gets to show off her skills the most in “The House of Uncle Thomas.”  Based on the book by Harriet Beecher Stowe, this mini play told through story and dance is a reflection on how Tuptim feels enslaved under the rule of a King.

Production elements include Kendra Rai, the costume designer who assembled color outfits for everyone.  Scenic Designer James Fouchard put together an elegant set which included a large palace with a scenic view of Siam.  Lights by Dan Covey include some nice touches like the lighting effect made to look like fireworks.

The instruments chosen for the live orchestra made for a fine sound led by Musical Director/Conductor Jenny Cartney.  The harp, played by Laura Stokes, the violin played by Patricia Wnek, and the percussion by Alex Aucoin are just a few of the members who made the lively 9 member orchestra sound wonderful.

The King and I is a fine way to end the Olney Theatre Center’s 75th season.  The memorable performances and timeless music by Rodgers & Hammerstein makes this production a delectable holiday treat.

Running Time:  2 hours and 45 minutes with one 15 minute intermission.