Theatre Review: ‘The Lieutenant of Inishmore’ at Laurel Mill Playhouse 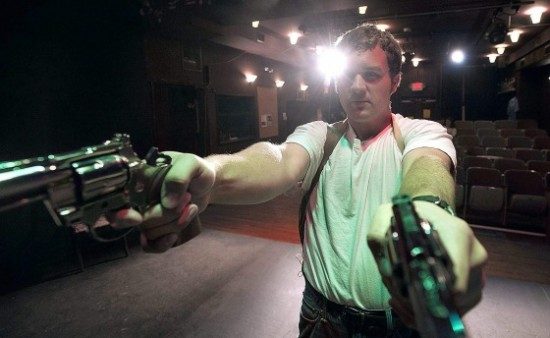 Even the world’s toughest, meanest psychopath is not without some sort of moral code.  For example, many deviants willingly spare the lives of women. For others, children are completely off limits. In playwright Martin McDonagh’s The Lieutenant of Inishmore, terrorists hold cats sacred. In this dark satire, one Irish National Liberation Army (INLA) assassin proves his feline loyalty as he stops at nothing to avenge the death of his own kitty companion.

… a wildly funny and smart comedy

The carnage is instantaneous in this twisted 90’s black comedy about terrorists and the communities they ravage. When Padraic (Nicholas Hanni), an INLA extremist (whose love of country obliges him to torture local drug dealers and bomb towns) discovers that his cat, Wee Thomas (Bones Maurer), has been murdered, he abandons all regularly scheduled terrorism to avenge his beloved fur ball’s death. Frightened that they will be blamed for Wee Thomas’ demise, neighbor Davey (Matthew Purpora) and father Donny (Stephen M. Deininger) hatch a hair brained and ill-fated scheme to convince Padraic of their innocence. Subsequent calamity ensues bringing more cats and terrorists out of the woodwork, guns and villainous agendas in tow. 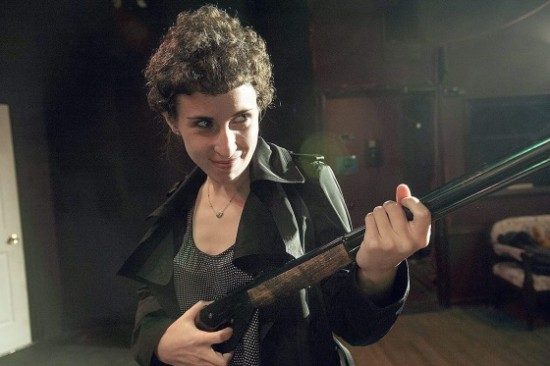 Director, Joshua McKerrow, pulls no punches in this in-your-face comedy that delves into the minds of “the people who hurt other people.”  No murder is implied or suggested, rather McKerrow loads up on blood squibs and prop guns from the play’s grisly beginning until its squeamish climax.  While I initially thought the blood sport teetered toward overkill (pun intended), the choice actually makes sense for a story about extremists who’ve very little tolerance for ambiguity. Torturers, after all, are not known for their subtlety.

Joshua McKerrow, who also serves as Set Designer, opts wisely for a simple array of dated nineties wooden furniture, making room in Padraic’s cottage for the impending onslaught of flying limbs and bodily fluid. Brian Dettling of Stage Armament Solutions and Goatman Hollow Productions design an oddly morose yet comical array of excessively mangled cat entrails and bloated human remains. Costumer Kat McKerrow creates era appropriate attire for the Irish misfits; there is no shortage of washed denim, bulky sweaters and bad hair, all perfect imitations of unflattering nineties fashion.  Likewise, Sound Designer Jeffrey Gangwisch grants the audience a reprieve from the more intense scenes and helps to smooth the far too long and laborious transitions with cool, nineties hip and trip hop. Thanks to the ambitious and mammoth staging by the production crew, this play is one surprising, sensory rollercoaster.

The strength of the cast of The Lieutenant of Inishmore rests largely in their physical stamina and their masterful handling of playwright McDonagh’s classic comedic banter. As Christy (Derek Cooper), Brendan (Ben Bradley), and Joey (Daniel Schall), the members of an INLA splinter group, this trio do well as the three stooges of terrorism. This effect heightened by Costumer Kat McKerrow’s choice of matching monochromatic suits. Unfortunately, the threesome takes turns losing their faux Irish accents, though thankfully their endurance stays strong during their physical combats. Also noteworthy for his physical endurance and emotional commitment is Jeffrey Gangwish as James, Padraic’s strung and shirtless torture victim.  Though a small role, his is one of the most memorable, intense and visually gripping. 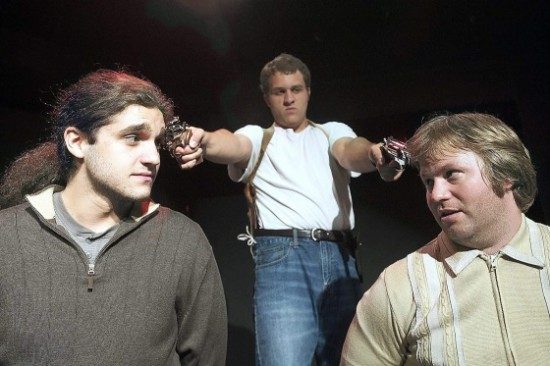 Matthew Purpora as teenaged neighbor Davey and Stephen M. Deininger as Donny, Padraic’s curmudgeony father, have undeniable chemistry, playing up McDonagh’s one-liners and slapstick banter even as they are surrounded by blood and gore. Blank expressions and exaggerated gestures abound between the two who charmingly complement one other.

Though petite in stature, Erin Wagner is no shrinking violet as Mairead, aspiring anarchist Davey’s morbid little sister and fellow cat lover.  Wagner is confident, unrelenting and appropriately a little scary as a teenager who shoots cows in the eyes for fun. She vacillates between smitten school girl and ruthless terrorist seamlessly making her evolution the most wickedly satisfying to watch.  Not to mention Wagner’s is the most believable of Irish accents.

As Padraic, the scariest terrorist of them all, Nicholas Hanni is frighteningly charismatic. Dressed casually in jeans and crisp white t-shirt, Hanni looks more like an everyday blue collar worker than a ruthless sociopath. His tongue-in-cheek delivery and his emotional starts and stops make even the bloodiest scenes hilarious. Whether he is threatening to shoot his own father or stroking a dead and decaying cat, Hanni has the comedic chops and charisma to coax an uneasy laugh out of the audience over and over again.

And an honorable mention goes to Bones Maurer for his cool, calm and collected portrayal of the gallivanting cat, Wee Thomas. Yes, there is a real live cat in this play and he totally steals the show.

In The Lieutenant of Inishmore, playwright Martin McDonagh has a written a wildly funny and smart comedy with a simple premise and lots of surprising layers.  Yes, there is an inordinate focus on cats and cat people which is partly what makes it so hysterical, but it’s larger story is about human emotion and what makes the worst among us tick. Despite their affinity for violence, the characters in this play are not without their own personal constitutions. However, this play is not for everyone. Act Two while riotously funny, is also the most brutal with guns, guts, and blood galore. Those who prefer Disney flicks and feel good family dramas may want to sit this one out.  Those who enjoy a bit of dark humor will enjoy.