Theatre Review: ‘The Tempest’ by the Baltimore Shakespeare Factory at The Great Hall at St. Mary’s Community Center 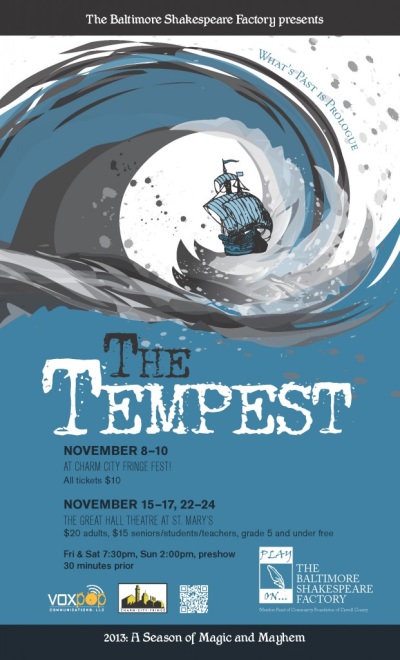 The Tempest without the benefit of a director would seem to be a ship at the mercy of a storm at sea, without the comforts of a compass, keel or rudder, but the Baltimore Shakespeare Factory’s production of the play is actually a fun and creative spectacle. Considering that the players were given one day and four evenings to cobble together the whole show-including the props, music and costumes, the production went off reasonably well.

The Tempest, Shakespeare’s last and one of his most lyrical plays actually seems to lend itself well to the freestyle air of a director-less stage and an actor-directed production.  I went in figuring that a good (or at least a decent) Shakespeare company could feel their way through The Tempest by rote and I believe that I was at least partly right. The familiar Shakespearean themes of power, romance, and intrigue set against the backdrop of Prospero’s eponymous tempest are for the most fairly muted and with a few notable exceptions, underplayed. A whole barrage of the sponge-rubber tomato-shaped stress balls that are available for rent by the bag at the box office were dispatched at actors who couldn’t remember their lines or who acted badly, but this just lent the production a carnival atmosphere that was refreshing.  (I rented a bag just in case, and hurled them liberally.)

Prospero, one of the most formidable roles of the Shakespearean stage is competently played by Ian Blackwell Rogers.  Rogers’ Prospero is more in the character of a beneficent elder uncle than the dark, brooding sorcerer as he is sometimes portrayed.  Katherine Zoerb gives one of the more solid performances as Miranda, Prospero’s daughter whom he hopes to restore to her rightful place at court.  The spirit Ariel is played by actress Jenna K. Rossman who brings a palpable lightness and subtlety to the role and was, in my opinion, the strongest actor on the stage.  A feminist message is surely lacking in the Tempest, but Zoerb and Rossman both easily have enough stage presence to add at least a strong feminine voice to the production.  In fact, it is the women, especially those playing multiple male roles, like Jenn Mikulski playing Trinculo/the boatswain and Adrian and Barbara Madison Hauck (Stephano/ship’s master/Fransisco), who carry the production.

…well worth the cost.

Calibans come in all stripes in my experience, from comic to histrionic to menacing.  James Miller’s Caliban could be an amusing man-monster if just a bit more things like costuming were brought to the role. Rick Lyon-Vaiden plays Ferdinand, prince of Naples and gives one of the more pleasing performances in the play.  The scheming Sebastian and Antonio, Prospero’s usurping brother, played by Andrew Tucker and Joel Ottenheimer respectively, give adequate performances as does Lonnie De Vaughan Simmons as Alanso, King of Naples.

The Baltimore Shakespeare Factory is housed in The Great Hall Theatre at St. Mary’s Community Center, an intimate but not diminutive venue that seems well-suited to Shakespearean productions but still looks very much like the converted church that it is.  Musical scores, directed by Jim Stimson seem spontaneous and original and there is even a dose of UB40 reggae thrown in for fun.

The machinations that bring about Prospero’s reconciliation of magic to the world of mortals and the ultimate forgiveness of his enemies is lively and almost always entertaining with actors breaking through the fourth wall and into the audience all helter-skelter. I was left with the feeling that they were a good-hearted group of actors playing for the love of Shakespeare and that a ticket to see the spectacle, if only to see the lightest treatment of the Tempest you are ever likely to see and the sheer entertainment value is well worth the cost.

Running Time: 2 hours plus with an intermission.

The Tempest runs at the Baltimore Shakespeare Factory at The Great Hall Theater at St Mary’s at 3900 Roland Ave. Baltimore, MD 21211 through December 22. Tickets are available at the box office or online.