Theatre Review: ‘The Woman in Black’ at Keegan Theatre 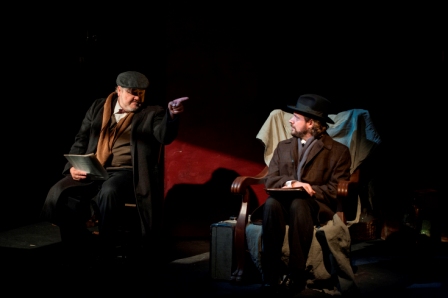 The ghost story, the horror movie, Fright Night!  When one thinks of theatre, one does not usually turn one’s mind toward theatre as a good vehicle for the spine chiller.  Words can weave an airy apparition far better than the mechanics of the stage, and film—well, the filmmaker’s art is the art of deception and suspense with its director’s total control over what is seen and heard.

Theatre, on the other hand, has a wide lens; though light can focus our attention, it cannot dictate our gaze. And words spoken, even by the best trained actor, cannot equal the magic those words can play upon a reader’s imagination.

I am happy to say that Keegan Theatre’s production of The Woman in Black, a theatrical ghost story, defies those expectations.  With two first rate performances by Matthew Keenan and Robert Leembruggen, and some slick stagecraft by co-director and scenic designer Colin Smith, the challenges of a theatrical horror story are overcome. 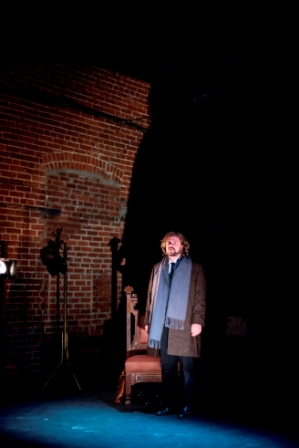 You won’t leave the theatre emotionally purged or intellectually stirred, even if you do rush home to your children as you are suddenly concerned for their safety.

Stephen Mallatratt based The Woman in Black on Susan Hill’s contemporary Gothic novella of the same name. His play opened in London in 1987 to rave reviews and has been playing at Fortune Theatre since 1989.  Although I might question the “raves,” it is not hard to fathom the enjoyment.

Mr. Kipps, played with delightful energy by Mr. Leembruggen, has hired a professional actor, played vivaciously by Mr. Keenan, to help him recite his 5-hour autobiographical ghost story to his friends and family.  He hopes that by retelling the story he will somehow be able to leave it behind: perhaps, his Freudian therapist suggested this treatment for “hauntings;” for it is never explained why he would think such a thing.

With a comic flare, Kipps and the actor banter back and forth about just how excruciating a 5-hour mumbled story would be.  Finally, the actor convinces Kipps not only to turn the story into theatre, but also to let him, the actor, play the young Mr. Kipps of the story.

Mr. Kipps is a solicitor who has been sent to the secluded home of the recently departed Mrs. Drablow, where he will spend a few days going through her papers in preparation for finalizing her will.

Immediately, the young Kipps senses something is not quite right about Mrs. Drablow and the small town where she lived.  Everyone in the town approaches her name with caution, either speaking of her cryptically or not at all.

Within hours of his arrival at the Drablow estate, however, Kipps discovers the source of the tension.  He sees an emaciated young woman, cloaked in black lace, lingering around the estate’s graveyard.

Although not a ghost story in the strictest sense of the genre, The Woman in Black plays on the form as it leads us into the mysteries of her haunting.

Leembruggen’s older Mr. Kipps does a stellar job portraying the various characters Keenan’s young Mr. Kipps encounters on his visit to the Drablow home.  He gives each a unique signature, allowing us to keep the story clear.

Keenan has the challenge of transporting the audience into the scary house, but he does so fantastically.  We are there with him in the spooky house.

Now, at this point you might be asking the same question that I asked when I noticed in my program that the cast for a play entitled The Woman in Black consisted of only two men.  “What, are they just going to gab about this lace-draped woman, or what?”  No, in keeping with the conceit of the play, no one is cast to play that wordless part because she is not really there.  Get it?  She is only a ghost.

That’s the spirit of the show—a ghost story, yes, but one that remains a bit tongue-in-cheek, allowing those who accept the premise to enjoy gently the fright of it all. 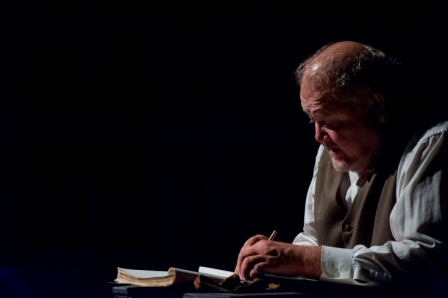 Co-directed by Mark A. Rhea and Colin Smith, the show’s pace is spot-on, with Smith’s scenic design fitting appropriately into the Church Street Theater’s dusty interior.  Lighting designer Michael Innocenti has done an excellent job controlling the focus of the show, and designer Kelly Peacock’s costumes are as Gothic as they need to be.

A special congratulations needs to go to sound designer Tony Angelini.  His scary sounds and modulated voices were the real fright of the night.

The Woman in Black is definitely that theatrical rarity.  For the occasionally spine tingling, tongue-in-cheek, ghostly night in the theatre, you should see this very well done production.

Advisory:  Not recommended for young children.