‘A Quick 5’ with Sherrie Maricle 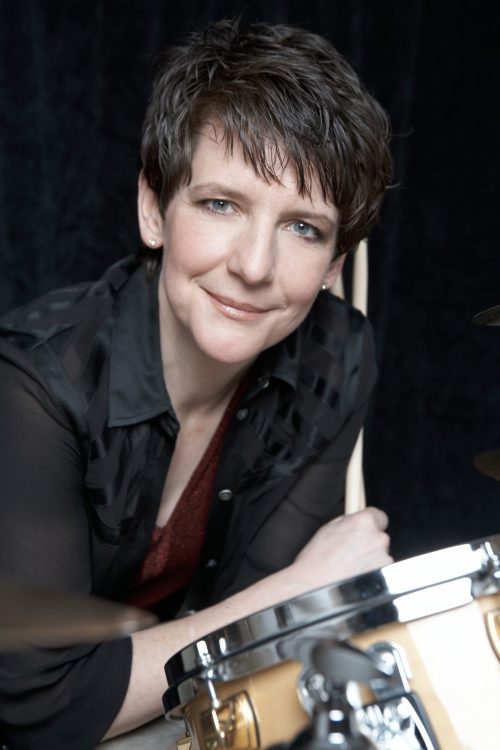 Dr. Sherrie Maricle is currently the drummer and leader of her own big band  The DIVA Jazz Orchestra  which provides all of the music for Maurice Hines is Tappin Through Life at Arena Stage playing through December 29th. Her two other jazz ensembles are FIVE PLAY and The DIVA Jazz Trio. At Carnegie Hall, she performs with The New York Pops and serves as the orchestra’s Director of Education. As a teacher Sherrie runs a private drum set and percussion studio and is also a conductor for The New York Summer Festival. Honors include: The Mary Lou Williams Lifetime Achievement Award from The Kennedy Center (2009), a tour grant from Arts International, The Kennedy Center Alliance Award for Outstanding Achievements in the Arts, a grant from Meet the Composer, a Doctoral Fellowship from New York University, and selection as the New York University Music “Teacher of the Year” in both 1997 and 2000. I must say, I don’t see too many female drummers and certainly not one that has her own band, but Sherrie and The DIVA Jazz Orchestra is a group that once you hear them play, you will want to hear more.This is in no small part to Sherrie’s drumming which lays the foundation down for each song with all the groove and swing of  Gene Krupa and other drummers of the big band era. Keeping the original arrangements alive of some of our greatest arrangers is a dying art so when you hear a group playing charts by Nelson Riddle and others, it is a welcome treat. Get to Arena Stage if you can before the end of the month and you’ll hear Sherrie and her group playing some really good music while backing one of our finest tap dancers. Now that’s a good combo for the holidays.

Most females you see in  school play violin, flute or french horn. Why did you choose the drums for your instrument?

My 7th grade teacher took me to see Buddy Rich and his Killer Force Orchestra in 1974 at the Forum in Binghamton, NY. When I got home that night, I told my mother I was going to be a big band jazz drummer…it’s my true passion and I feel very fortunate that “it” found me.

What was your inspiration for starting the DIVA Jazz Orchestra?

Stanley Kay (also Maurice Hines’ manager) formed DIVA in the summer of 1992. We had an audition and 40 women came from around the world. We picked the original 15 and had our first performance on March 30 of 1993 at New York University.

I started drumming for Maurice in May of 1990 at the 75th Anniversary of the Shubert Theater in New Haven, CT. I was the “pick-up drummer” for the theater and Maurice was a featured performer. He brought his manager/conductor Stanley Kay. That is how we all met.

You are the drummer for the NY Pops which is conducted by the NSO’s maestro Steven Reineke. What do you like most about working with this very energetic conductor?

Steven is a “stellar” conductor and a creative, visionary leader for The New York Pops. His innovative programming makes each performance fresh, exciting and interesting for the orchestra and audience. He is also a genuinely kind, thoughtful and generous person.

Who do you consider to be some of the greatest jazz arrangers of all time?

THERE ARE SO MANY!!! But I will say… I revere Thad Jones, Toshiko Akiyoshi, Tommy Newsom (he composed/arranged several of our charts) Nelson Riddle and Johnny Mandel (with whom we’ve recorded). I also love Sammy Nestico, Alan Baylock (D.C. resident), Mike Mossman, Mark Taylor (D.C. resident), Ellen Rowe (Michigan), Paul Keller (Michigan) and two members of my band, Noriko Ueda (bass) and Leigh Pilzer (sax)…to name a few. All of these composers/arrangers have created  interesting, sophisticated, powerful, energized, exciting and challenging music for the players, while simultaneously creating inviting, fun, swinging, thrilling, accessible music for the audience. As a band leader, I want the musicians AND the audience to LOVE the DIVA musical experience.