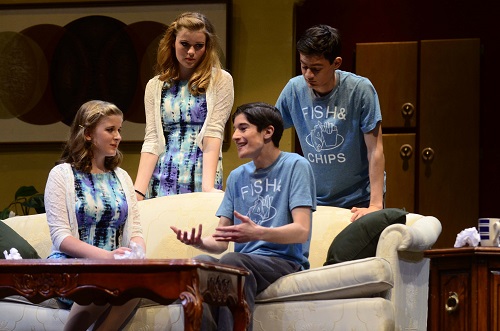 Writers Block. The worst fate a writer can face or at least the second worst after overbearing mothers. This past weekend, Albert Einstein High School showed us just how entertaining a writers imagination can be in their production of Figments, by Billy St. John.

Figments was written by Billy St. John in 1995 and takes place in New York City in the apartment of writer Rick Jacobs. Rick (Mark Cioffi) hasnt had much luck with his love life or his writing: his mother drives away every woman he becomes close to, hes in love with his next door neighbor Loni (Lily Habenstreit) but shes dating an intimidating body builder (David Toro), and to make matters even worse; he has writers block. Throughout the play, the audience is entertained by figments of Ricks imaginations that are either braver or more exaggerated than their real counterparts. Figments is a relatively new play, having been written in the past decade, but has been received positively throughout North America.

Einsteins entertaining production was performed by an energetic cast who had the audience laughing in every scene. Michiko Feehans hilarious portrayal of Ricks Mama, was arguably the most entertaining of the night; she was able to perfectly capture the over-attached mother we all know too well. The entire ensemble of Ricks figments contributed to the comedy of the show while also helping the audience relate to Ricks hopes and fears. The inventive concept of this show paired with the casts high energy and creative light and sound display made for an enjoyable experience. 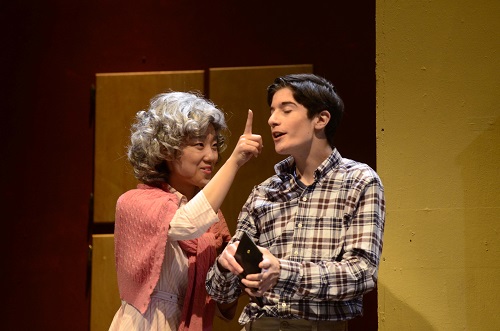 Cioffi convincingly captured the spirit of a middle-aged, homebody writer. His imaginary counterpart, Rick 2 (Carlos Castillo), did an exceptional, and hilarious portrayal of the daring person we all wish we could be. The phenomenal Feehan embodied Mama perfectly from every nuance of her character. She captured the audiences hearts with her humorous remarks and heartfelt declarations of love for Rick.

Its not every show that we get to see what goes on in a writers mind. This production would not have been the same without the ensemble of Ricks figments of imagination. Imaginary Loni (Adeline McCaul) and Rick (Castillo) had the audience roaring with laughter when their relationship became more physical. The imaginary cast of Ricks new murder mystery was also incredibly entertaining, from the beautiful and sarcastic Veronica (Elizabeth Lambert) to the flamboyant corpse David (Jordan Hill).

The set allowed a variety of action for the characters, from closets that seemingly held unlimited amounts of people to a kitchen with room enough for figments of imagination, make-out sessions for imaginary Rick and Loni, and Mamas cooking. A creative light display and dynamic musical alerted the audience to whenever Ricks imagination was at work.

Fellow writers as well as others who appreciate the struggles of love and creativity should all come to see Albert Einstein High Schools entertaining production of Figments.