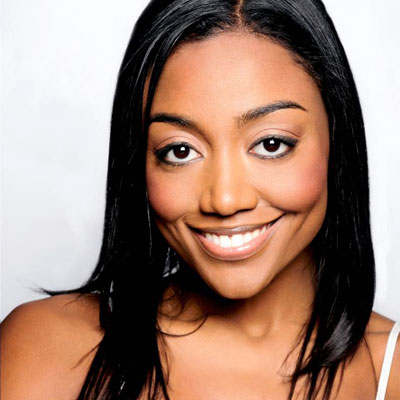 Usually when a singer gives his or hers first concert, it’s in a small venue with friends and family. If you are a 2013 Tony Award winning actress that won’t do. Patina Miller hit Broadway in a big way a few years back starring in Sister Act. The show garnered her a Tony Award nomination for Best Actress. She was only 24 at the time. She is currently starring in Pippin as the Leading Player, which is the performance that won her the Best Actress Tony Award this past season.

Miller’s concert debut happened this past Friday evening at the Kennedy Center’s Terrace Theatre as part of the ongoing Barbara Cook’s Spotlight series, and what a debut it was. Backed by a group of four veteran Broadway musicians, Patina Miller hit the stage with Kander and Ebb’s “Sing Happy” and never looked back. A few of her vocal highlights included Ahrens and Flaherty’s “Mama Will Provide,” Sondheim’s “No One is Alone,” and my favorite of the evening Adam Guettel’s “Life is But a Dream.” With these and the rest of her song list Miller’s voice had  power and sheen throughout.

Miller’s band consisted of James Sampliner (musical director/piano/arrangements), Rich Mercurio (drums), Mark Vanderpoel (bass), and the man who played in the pit of Sister Act on Broadway with Miller and more importantly at our wedding, John Benthal (guitar). There is a distinct musical vibe that is created when the band is in the right groove and this group definitely was grooving and swinging to Sampliner’s innovative and fun arrangements.

No concert by Patina Miller would be complete without a taste of her Broadway shows and “Magic To Do” and “Simple Joys” were the songs of choice from Pippin, as was the title song from Sister Act. That is some power.

As for Miller’s patter between songs, I found it interesting hearing about her family and how she got to where she is now. Her story about auditioning for Sister Act was amusing in particular since she showed up in full 70’s garb. I would have liked to have seen that. The fact that Miller kept telling the audience that she was nervous got a bit much after the third or fourth time, but I’m sure as she does this show again and again she will calm down. If she was nervous, her vocals did not reflect it as everything sounded quite polished.

Overall Patina Miller’s concert debut was a success. She is living her dream of performing on Broadway while now starting a concert career. The fact that her concert debut was at the Kennedy Center is a true accomplishment and one I’m sure Miller will never forget.

Running Time: 80 minutes with no intermission

Barbara Cook’s Spotlight presents Patina Miller was a one night only event at the Kennedy Center’s Terrace Theater on December 6th 2013.