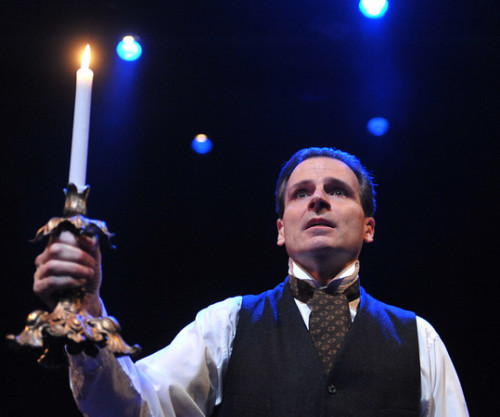 Adapted and Performed by Paul Morella from Charles Dickens’ original novella and reading tour, Olney Theatre Center presents the classic and chilling tale of A CHRISTMAS CAROL: A GHOST STORY OF CHRISTMAS. (Photo by Stan Barouh)

At Olney Theatre Center, theatregoers have the unique opportunity to experience the classic story A Christmas Carol: A Ghost Story of Christmas as the author, Charles Dickens originally intended for it to be presented.  While I am sure Dickens would appreciate the big, splashy, musical productions and lavish motion picture adaptations, Dickens originally intended for his story to be presented by one person.  For four consecutive years, actor extraordinaire Paul Morella has delighted audiences with his one person adaptation that is faithful to the original.  In fact, 99% of the words used in his performance are from the classic Dickens novella.

For two hours Mr. Morella entrancingly guides the audience through a ghost story of Christmas in Victorian England.   Yes, it is a ghost story after all since it tells the adventures of bitter old miser Ebenezer Scrooge and his transformation resulting from supernatural visits by Jacob Marley and the Ghosts of Christmas Past, Present and Yet to Come.

Surrounded by a wooden desk, candles, books, a few plants, and a chair, Mr. Morella ignites the imagination with his natural storytelling abilities.  He tells the entire story, but with no book in hand.  Memorizing the book alone must have been a challenge, yet his words flow off the tongue with great ease.  He isn’t just reciting the book.  Quite skillfully, he acts out all of the characters.  Through subtle changes in his voice, face, and posture  Morella transitions from one character to another.   I watched in amazement as he went from being Scrooge portrayed with beady little eyes to having a little boys voice for the role of Tiny Tim, the sick son of Bob Cratchit, Scrooges abused, underpaid clerk.

The detailed sound design by Edward Moser really added to the production.  From the sound of a bell ringing with the opening of a door to spooky music, the sound made it easier for audiences to be engulfed into the story.  Lighting design by Sonya Dowhaluk also enhanced the production.   In particular, each of the floor lights were surrounded by an open book adding a nice touch.  What is more, the floor lights added to the story when a spooky moment in a single light was required.

A Christmas Carol: A Ghost Story of Christmas is a solid theatrical experience.  Because the story is told through one person, those who have trouble using their imaginations might find it hard to stay focused. For the rest of us, this production is a cozy way to spend an evening with family and friends during the holiday season.  And as Tiny Tim says, “God Bless us, everyone!”

Advisory:  Recommended for ages 10 and up.

A Christmas Carol: A Ghost Story of Christmas plays through December 29, 2013 in the Mulitz-Gudelsky Theatre Lab at Olney Theatre Center—2001 Olney-Sandy Spring Road, in Olney, MD. For tickets call (301) 924-3400, or purchase them online.