Theatre Review: ‘A Christmas Carol’ by the Little Theatre of Alexandria 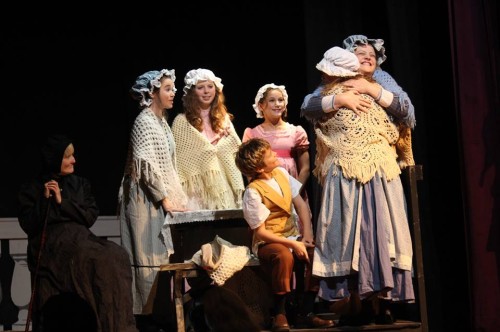 The patterns that we fall into every holiday season are insidiously familiar.  With Thanksgiving as the starting gate, we end our fall events and the “Holidays” come. Along with radio jingles and harsher weather, come the traditions that are just… there. They arrive without us realizing it. One of the most traditional is Charles Dickens’s A Christmas Carol, a chestnut that keeps on seasonally sprouting.  Little Theatre of Alexandria’s festive, kid friendly version of the classic finds a niche this holiday season.

This show is timeless for a reason.

Most everyone knows the story of one Ebeneezer Scrooge (played here by Fred Lash), a man so consumed with self and possessions that he shuts out all meaningful human interaction, especially the “wasteful” time of Christmas day. A series of supernatural events are set in motion to let him experience what he has missed and how he could have made a difference in the lives of people around him. Namely, his clerk Bob Cratchit, (a believably nebbish Bob Cramer), his nephew Freddie (an expressive Charles Lourens), and all the others he has neglected. His change of heart and the redemptive quality of the show actually mirrors the Christmas season of hope. 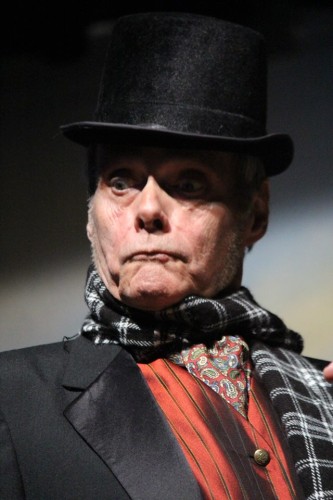 Given the exposure the show has had over the years, everyone has their favorite scenes, such that some are ingrained into our psyche. Many say that the 1950s film with Alastair Sim is the definitive version, though the black and white is extremely dreary. Other fine ones are a surprisingly good Carol by George C. Scott (1984) and one by Patrick Stewart (1999).

Back to Alexandria we have a shortened version that hits all the main storylines, with an energetic if young cast of 34. The opening is a converging crowd scene where everyone in the neighborhood offered a snippet of what they thought of Mr. Scrooge–ambitious, but nonetheless distracting to the audience. After a day spent counting his wealth and that of others, Scrooge retires for the evening.  Wakened from his sleep, to a bursting light-filled closet, is his old partner Marley (Elliot Bales, last seen here in 33 Variations as Beethoven). His large stature and garish outfit filled with dragging chains was a sight to behold, and kept the tikes attention throughout. Marley wails at the error of his ways on earth and  gives Scrooge a way out. 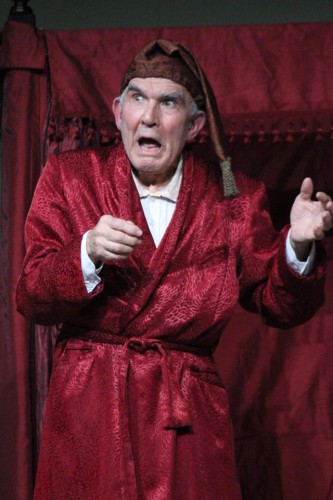 He would be visited by more otherworldly messengers representing Past, Present and Future.  Ghost of Christmas Past (Valerie Chamness) provided a light smooth touch guiding Scrooge back to his happier youth, as she glides across the stage in shimmering lights.  For Christmas Present, Bales is impressive as a larger than life philosopher. He appears in a kaleidoscopic green outfit and a scepter, bridging the gap to show him how he is viewed by the people he knows. Christmas Future is a large silent robed apparition (think Andre the Giant in ‘The Princess Bride”) who simply points to the dire future that he could have avoided.  Tiny Tim, passing early, his family never the same, his own headstone a reminder of a life unlived.

Special Effects are led by Ben Norcross and Art Snow made it enjoyable to the kids without being too scary. Light work and focused spots were used quite effectively. Director Rebecca Patton (also set designer) and Producers Heather Norcross and Eddy Roger Parker kept it straightforward and crisp, though I noted that many scenes, especially with the Cratchit family were left out from the full show.

Interesting that when Dickens wrote this in 1848, the Christmas traditions were just coming back, having been suppressed by Puritan influences in the 17th century. His work in this story is credited for helping bring back the Christmas tradition to where it is now. Retailers the world over thank him. More importantly, he also wanted to show the social levels of the haves and have nots at the time of the Industrial Revolution. Life could be brutal back then, and prisons and orphanages were places of despair for people whose circumstances turned sour. 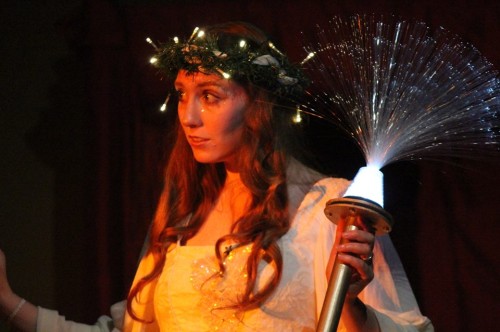 Valerie Chamness as Ghost of Christmas Past. Photo by Eddy Roger Parker.

For this performance, an earnest cast came up with  some with quite acceptable accents and filled the stage with energy, while working on polish at some points. Many youngsters were still cutting their teeth onstage.

And Scrooge? Lash’s performance revealed the actor’s own interpretation. Director Patton had him leave a bit on the table in terms of the big internal moments, however, and his ultimate transformation would have been more easily believed had he communicated this.

A Christmas Carol is a festive reminder of all that we have, in one of my favorite cozy venues.  This show is timeless for a reason.

Running Time: 1 hour and 10 minutes with no intermission.