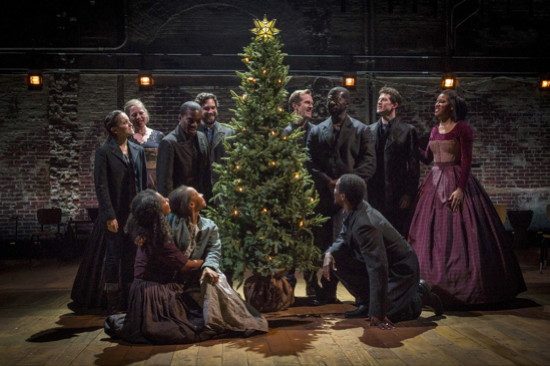 The Cast of ‘A Civil War Christmas.’ Photo by Richard Anderson.

Center Stage’s presentation of Pulitzer Prize-winning playwright Paula Vogel’s A Civil War Christmas: An American Musical Celebration is a unique Christmas tale with local roots. Set in and around Washington DC and Maryland on Christmas Eve of 1864, it is patchwork quilt of stories and characters spanning age, race, religion and social status. Using a blend of historical figures with those who are composites of real and fictional people, all are rooted in fact. Traditional Christmas carols, folk songs and even the Maryland state song (which borrowed its music from the German carol “Oh Tannenbaum”), complement each tale. The stories are rooted in the real tragedy of the times, but Vogel injects the right amount of lightness with humor and most of all hope, into one of the most challenging times in our young nation’s history.

This production benefits from a stellar artistic team. Rebecca Taichman simply and thoughtfully directs it with choreography by Liz Lerman and scenic/costume design by Dane Laffrey. Without the distractions of a complex set and costuming, the focus is on the wonderful ensemble of actors who bring each character and story vividly to life.

Part musical, part history lesson, ‘A Civil War Christmas’ is America’s Christmas Carol and should be seen by everyone this holiday season.

It feels appropriate that just the bare brick wall of the theater’s historical building is used as the backdrop. Lighting designer Scott Zielinski utilizes the back wall as a “screen,” on which the change of scenes, in simple lettering, is projected. Props, costumes, and musical instruments line the back of the stage where the musical director, Victor Simonson, also sits at the piano. He conducts the cast who, without the use of microphones, all possess strong, sweet voices that project beautifully in the theater. The actors are also called upon to be a part of the “orchestra” — playing a guitar, a fiddle, beating a drum and even recalling old-time radio broadcasts by providing various sound effects. 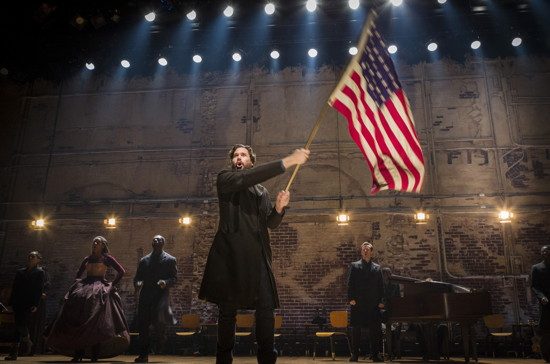 The actors enter the stage from the wings in nondescript street clothes; dress themselves and each other in a uniform jacket or hoop skirt, corset or a hat to create the characters. They break the fourth wall by providing narrative throughout. Some roles cross gender boundaries and even the boundary of the non-human kind – a horse and a mule. The rest is left to the imagination and the power of the performances and mighty they are.

A weary, very human President Lincoln (Jeffry Denman, also performing as Robert E. Lee and the poet Walt Whitman) contemplates his second inaugural address while trying to sneak out of the White House to retrieve a pair of gloves he left at the summer cottage – a Christmas gift for his wife, Mary Todd Lincoln (Kati Brazda). Along the way, he has a near brush with John Wilkes Booth (Matthew Greer who also portrays Ulysses S. Grant) and his companions in a failed kidnapping plot. Lincoln also briefly encounters a child, Jessa (Sierra Sila Weems, alternating with Mackenzie Kristine Jarrett). Her mother Hannah (Nicole Lewis), unaware of the Emancipation Proclamation, has fearfully sent her out alone to find safe haven at the White House.

Both Mary Lincoln and her friend, the dressmaker to Washington society, a former slave named Elizabeth Keckley (Tracey Conyer Lee), fight the haunting memories of their lost sons while carrying on with their lives. Both are brilliant performances.

Suffering from bouts of depression and worry for her husband, Mary Lincoln is never at ease, flitting from one thing to the next. With the help of Keckley, she resists the temptation to spend money on beautiful clothes to stand as an example to the nation. As a gift for her husband she insists on finding a rare thing to be had at the time – a Christmas tree. She does not know it has been promised to Mrs. Keckley and this sparks a series of comic events. On one of Mrs. Lincoln’s regular visits to the Army hospital, she comforts a dying Jewish soldier (A.J. Shively) by singing “Silent Night” in sweetly misguided gesture. 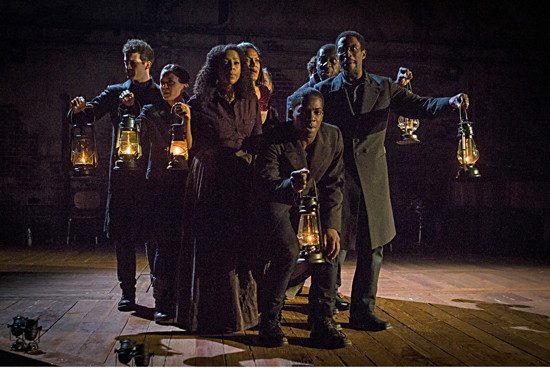 The Cast of ‘A Civil War Christmas.’ Photo by Richard Anderson.

Keckley’s son periodically appears to her as a ghost, most poignantly as she sings “Sew the Collar, Finish the Hem/What Child Is This?” While Elizabeth Keckley can give gentle guidance to her First Lady, turn the heads of a merchant and his two sons (Sekou Laidlow and Tyrone Davis, Jr.) she also possesses a fierce inner strength that took her from a slave to prominence. After she finds the near-frozen Jessa, Keckley holds the child in her arms and wills her to live, singing “Ain’t that A-Rockin’ All Night ” as they race to the White House.

Oberon K.A. Adjepong as Decatur Bronson (also as James Wormley, the DC merchant) creates a character of great depth and complexity. A Union sergeant in the Colored Infantry with an eager Quaker (A.J. Shively) as his aide, Bronson is consumed by the kidnapping of his wife Rose (Nicole Lewis) — and vengeance for those who took her. In a tender flashback, Rose is giving him a writing lesson while Bronson writes his proposal to her. When a boy (Andrea Goss) who has run away to join the Confederate Army crosses his path, his innate humanity is tested.

More stories and exceptional performances from the entire cast abound and intertwine in this wonderful and unique production. Part musical, part history lesson, A Civil War Christmas is America’s Christmas Carol and should be seen by everyone this holiday season.

Lynne Menefee is the creative director/owner of Menefee Creative (www.behance.net/menefeecreative), a graphic design/marketing company. After earning her BFA from Maryland Institute College of Art, she worked at the Museum of Man and with San Diego’s Old Globe Theatre as a graphic designer and in the costume shop. In Los Angeles, she worked for CBS. Lynne returned to Baltimore and started her own business with clients that include the art organizations, musicians, nonprofits and educational institutions. She is a member of the Memorial Players in Baltimore and a member of the LA-based Costume Designers Guild Local 892 as a costume illustrator. Lynne manages and creates content for a vintage record show site and does concert reviews for martiniinthemorning.com, an online radio station based in Studio City, California. She writes reviews for both the Maryland and New York Theatre Guides, as well as interviews.