Theatre Review: ‘A Commedia Christmas Carol’ by Faction of Fools 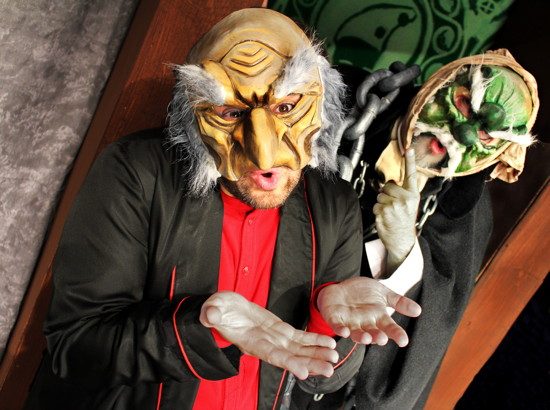 It is no wonder Faction of Fools won The John Aniello Award for Outstanding Emerging Theatre Company or that its production of A Commedia Christmas Carol was nominated for the Charles MacArthur Award for Outstanding New Play at last year’s Helen Hayes Awards. There is much to be thankful in this ingenious retelling of the Charles Dickens’ classic, which premiered last year. An encore of this delightful production for the 2013 holiday season is a blessing indeed.

Faction of Fools embraces the Italian Renaissance theatrical style of commedia dell’arte, employing masks, physical comedy and audience interaction. It also uses archetypal characters, which makes the style a perfect fit for a fresh retelling of this story. Scrooge embodies a “Pantalone,” one of the principal characters found in commedia dell’arte who is portrayed as a greedy, old man. A chorus of phantom “Pulcinella” is employed which is the “Everyman and no man, an unsung hero who ‘couldn’t make it on his own.’” This is a relevant choice by the director in these still troubled political and economic times, especially around the holidays.

If you missed this delightful show last year, put it in on your Christmas list! Let us hope Fraction of Fools makes this a Christmas tradition.

Another unique characteristic of this company is its partnership and residency with the oldest college for the deaf in the U.S., the 150-year-old Gallaudet University in Washington, D.C.  Faction of Fools uses deaf actors among its cast, adding a special nuance to the production. When college alumnus Michael Sprouse, reprising his role as Tiny Tim, teaches Scrooge to sign, “God bless us everyone,” it has even more impact than if he had spoken the words.

Artistic Director Matthew R. Wilson has written and directed a hilarious, energetic and touching holiday concoction. Although relatively faithful to the book, he cleverly blends period dialogue with contemporary references and puns while allowing for improvisation and slapstick comedy. When the speechless young Scrooge (Tyler Herman hidden in a full head mask) is about to lose Belle (Julie Garner), present day Scrooge (Paul Reisman) encourages him with classic lines from some of the most iconic romantic movies – Jerry McGuire, When Harry Met Sally, Notting Hill, Casablanca and Say Anything. The Cratchit family Christmas dinner is a horsefly requiring a great deal of acrobatics to catch but they remain eternally cheerful while tossing the “baby” around like a football. Instead of a Christmas goose, Scrooge provides them with a Christmas chicken (Lance Hall).

The actors are just pure fun to watch. Paul Reisman plays Scrooge with a great wit and is deft at improvisation with the audience. He is supported by a wonderful cast playing multiple roles: Joel David Santner (Bob Cratchit, Ghost of Christmas Past – a “Pierrot” – the classic sad clown – who is also a candle – and the bottom half of Christmas Yet To Come); Tyler Herman as Scrooge’s sprightly nephew Fred; Toby Mulford (Solicitor, Jacob Marley, Mr. Fezziwig, and Ghost of Christmas Present in one of the many beautiful masks designed by Tara Cariso and Aaron Elson of Waxing Moon Masks). He and Scrooge in engage in a hilarious verbal swordplay with the word “tense.” Julie Garner, who also plays a Solicitor as well Scrooge’s sister Fan, accomplishes an amazing transformation from Fred’s elegant fiancé Clara to the Cockney Mrs. Cratchit on stage.

The other stars are the production team. The set by Ethan Sinnot, Gallaudet’s theater program director, with lighting design by Andrew F. Griffin, is beautifully executed and lit. Slightly skewed in perspective with many entrances, staircases and “balconies,” the Victorian English setting is rich in detail. Scrooge’s bedroom wallpaper is a collage of masks. A chestnut seller’s cart miraculously transforms into Scrooge’s desk and back again as the seller pops out of the desk. A shop window becomes a movie screen projecting a surreal black-and-white film – giving Scrooge a look into Christmas yet to come. Costume designer Denise Umland has created beautiful period costumes. Accolades must go to the sound design by Thomas Sowers and original compositions and carol arrangements by composer Jesse Terrill, which were integral in this production. Many sequences are done in pantomime and he managed to create the sounds of the holidays on a London street, set the proper mood for the visits by the three ghosts, and coordinate dialogue with some of the actors in masks who lip-synched some of their lines.

If you missed this delightful show last year, put it in on your Christmas list! Let us hope Faction of Fools makes this a Christmas tradition.