Theatre Review: ‘A Funny Thing Happened on the Way to the Forum’ at Shakespeare Theatre Company 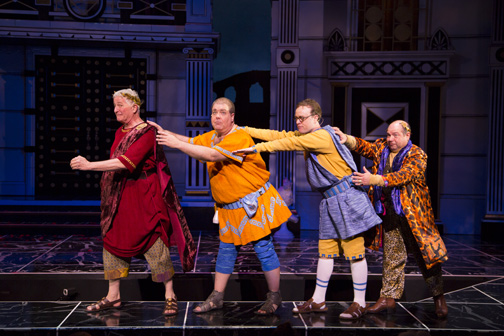 Steve Vinovich as Senex, Bruce Dow as Pseudolus, Tom Story as Hysterium and Danny Rutigliano as Marcus Lycus in the Shakespeare Theatre Company’s production of A Funny Thing Happened on the Way to the Forum, directed by Alan Paul. Photo by T. Charles Erickson.

Fifty one years after its pre-Broadway tryout at the National Theatre, the rip- roaring musical comedy that introduced Stephen Sondheim to Broadway as a composer and not just a lyricist,  A Funny Thing Happened on the Way to the Forum, returns to DC at Shakespeare Theatre Company’s Lansburgh Theatre.

The classic comedy, with a book by Burt Shevelove and Larry Gelbart, is about the sexual hi-jinks being committed by the Romans as seen through the eyes of a slave named Pseudolus (Bruce Dow) who wants his freedom. While in Rome we meet Marcus Lycus(Danny Rutigliano) who runs a Roman style brothel with plenty of attractive scantily clad courtesans with names like Gymnasia and Panacea. There’s Senex (Steve Vinovich), who is looking for more than what his wife, Domina (Julie Johnson), can give him; he finds it in a virgin named Philia (Lora Lee Gayer). The couple has a son named Hero (Nick Verina), who is in love with Philia, and their slave is named Hysterium (Tom Story) for good reason. Other characters include a warrior named Miles Gloriosus (Edward Watts) and an old man named Erronius (Harry Winter), who navigates the streets of Rome in his little motorized chair.

The book has plenty of laughs and sexual innuendo with Stephen Sondheim’s score adding to the merriment. Songs like “Everybody Ought to Have a Maid,” “I’m Calm” and, of course, “Comedy Tonight,” which was not in the show until the Washington tryout. 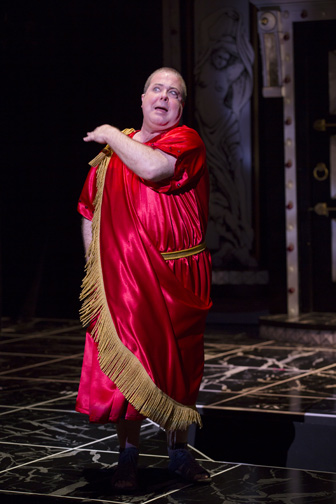 Bruce Dow as Pseudolus in the Shakespeare Theatre Company’s production of A Funny Thing Happened on the Way to the Forum, directed by Alan Paul. Photo by T. Charles Erickson.

Performance wise, there are a few standouts. First off is Tom Story as Hysterium. I didn’t know he could sing until his feature called “I’m Calm” came around. After that, plus other comedic moments in his performance, I saw Tom Story in a whole new light as a formidable musical comedy performer.  Who knew?  Next up would be the actress with a big voice and the talent that is even bigger, Julie Johnson as Domina. She commands the stage with her song called “That Dirty Old Man.” Johnson plays opposite the very funny Steve Vinovich as Senex. The two have great chemistry together. Harry Winter as Erronius, complete with his motorized chair, gives an endearing performance, while Nick Verina vocals on his feature “Love I Hear” makes him a natural for the young male lover.

If there is one performance that is pulling this show down a little bit, it would have to be Bruce Dow as Pseudolus. As some of you might know, Forum has room in the script for adlibs from the actors, but it is so tightly written that it really doesn’t need a whole lot of help. While Dow excels in his solo number called “Free,” I thought he was working too hard to put the laughs over, making his performance feel forced at times and in some places adding things that did not need to be added.

Production wise, the setting of street in Rome is expertly designed by James Noone, while David C. Woolard provides the Roman clothing. The orchestrations by Dan DeLange reduce the original charts by Irwin Kostal and Sid Ramin  down to just seven players. The orchestra conducted by Adam Wachter sounds fine, but I did miss the overall size of the score with the smaller ensemble. 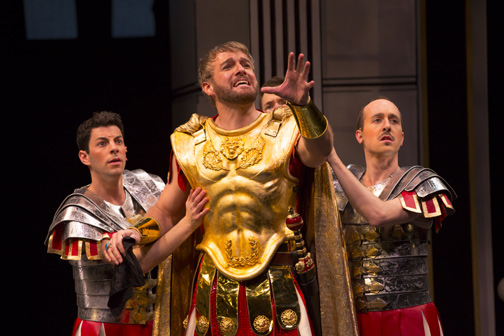 Matthew Bauman as Protean, Edward Watts as Miles Gloriosus and Blakely Slaybaugh as Protean in the Shakespeare Theatre Company’s production of A Funny Thing Happened on the Way to the Forum, directed by Alan Paul. Photo by T. Charles Erickson.

Josh Rhodes’ choreography gives the cast a work out and serves the show well. Alan Paul’s direction for the most part is good, but here is a case where I felt he needed to subscribe to the theory of less is more and trust the material without throwing in extra pieces of schtick. I also question his choice of cutting the chase music in act two because without the music underscoring the action onstage, it just feels awkward.

A Funny Thing Happened on the Way to the Forum plays through January 5, 2014 at Sydney Harman Hall at Shakespeare Theatre Company – 610 F Street, NW, in Washington, DC. For tickets, call the box office at (202) 547-1122, or purchase them online.