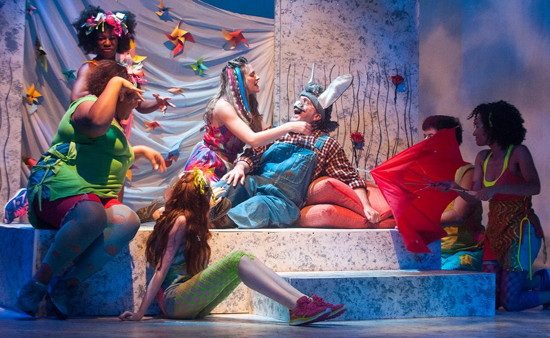 Lauren Turchin as Titania and Frank Vince as Bottom. Photo by Joshua McKerrow.

A Midsummer Night’s Dream is a story of power, love, jealousy and a bit of magic.  Shakespeare weaves together a number of compelling plot strands to produce one extraordinary night in the wood:  two young lovers kept apart by their families; two rival young men fighting for the love of one woman; two power couples who rule over their respective domains; one mischievous fairy who blurs the line between reality and dreams; and, not to be forgotten, a group of commonplace workmen who aspire to perform a serious play in tribute to the wedding of of their Duke and the Queen of the Amazons and end up being the comic relief!

I adored every minute of it!

There are many reasons to be impressed with this production.  The main reason is that every actor, across the board, is fantastic in their roles (in some cases, their multiple roles).  In my many years of going to Shakespeare productions, I confess to having developed a pet peeve against  portraying Shakespeare’s female characters as whining their way through the play.  Such excessive inflection of Shakespeare’s lines can make the character sound weaker than I always envisioned Shakespeare meant them to be.  Happily, there is none of that in this production. Lauren Turchin, who plays Hippolyta/Titania, the Queen of the Amazons and the Queen of the Fairies, respectively, has the strongest, clearest voice I have ever heard in a Shakespeare show.  Turchin, as the Fairy Queen, stands strong against Oberon’s jealous and domineering nature. 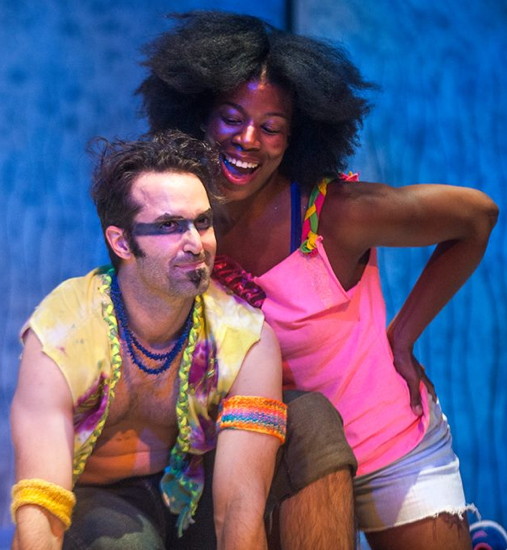 Valeka Holt, as First Fairy and Piper Quince, is one of the most relaxed and unselfconscious actors I’ve seen on stage – ever.  Holt’s First Fairy is sensual and powerful – a performance to remember.  Another standout in this cast of standouts is Nick DePinto as Puck/Egeus.  Depinto’s Puck was everything you expect to see in a magic-wielding character who’s very name, some say, comes from the old fashion word for devil.   DePinto is fun, funny and inclusive as he invited the audience to join the merriment on that midsummer’s night.  Frank Vince, as Bottom, also had fun with a wonderful character who is so egocentric that he thinks nothing of a group of beautiful fairies, and a fairy queen, fawning over him.

There is a real supportive chemistry and flow woven within this cast that allowed me to sit back and enjoy the action, thanks, in part to Kristin Clippard’s direction.  Her decision to set the play in the 1990s was okay and not my favorite, as it did not seem to generate any dramatic insights.  It did, however, allow her to take advantage of some great songs that fit into the storyline, like “Kiss Me” by Sixpence None the Richer and Green Day’s “Basket Case,” which addresses dreams, paranoia and how your mind can play tricks on you. 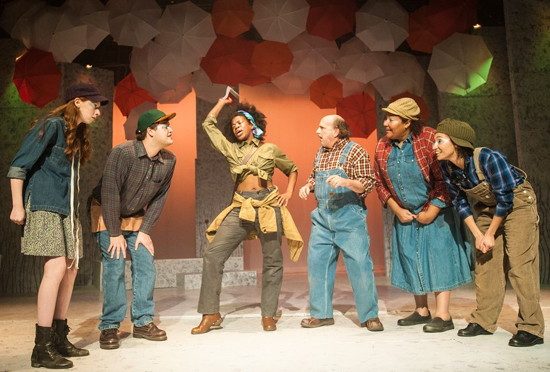 I have seen so many productions of Midsummer that I have lost count.  I even saw one that all the fairies were on roller skates!  With Annapolis Shakespeare Company’s production of A Midsummer Night’s Dream, however, it was a joy to sit back and watch the actors bring this fantastic story to life.  I adored every minute of it!  I am now going to make it a priority to see each Annapolis Shakespeare Company production, and you should too!