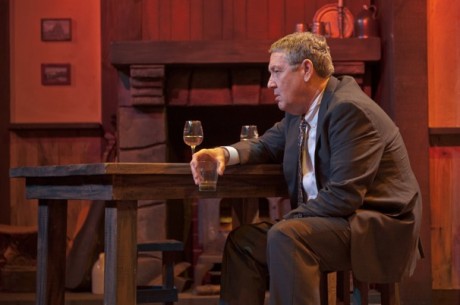 With An Irish Carol, Keegan Theatre’s season appropriate Christmas show, you will not find a money grubbing Scrooge or a melodramatically afflicted Tiny Tim.  Rather, you get a depressed, alcoholic, nasty tongued pub owner, David, who lost the love of his life during his robust years as an ambitious business man; and an immigrant Polish bartender, Bartek, with an autistic daughter, who is being forced (not against his will) to work Christmas Day because the pub is losing money and a special client wants a brunch.

I enjoyed Keegan’s more realistic approach to the holiday

You also will not find the highly theatrical dream sequences of Christmas Past, Present, and Future to turn the pathetical miser, Scrooge, from a lost, yet well-off soul to a somewhat sympathetic, once-a-year kind-hearted yet still well-off, miserly money lender.  Instead, you get Richard, David’s old friend whom he has not seen in many years because he married the love of David’s life after she left him for working all the time.

In this season of fantastically unrealistic kindheartedness I enjoyed Keegan’s more realistic approach to the holiday themes of generosity and human decency.  My only Christmas wish is that the play had been tightened, the speeches more poetic, and the transformational moment less obviously dodged. 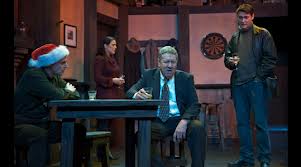 Kevin Adams plays the depressed grump David with a depth of despair that makes his presence tolerable only from a distance.  No wonder the bar is losing patrons.  I sat near the back of the theatre and I was just hoping someone would knock him silly just once for his rude and offensive disposition.

Josh Sticklin plays Bartek, giving the play’s outsider real enthusiasm and pep.  He was a welcome alleviation of the despair brought on by his employer.

Timothy Hayes Lynch plays Frank, one of the real regulars at the pub and the one real friend that David still has left.  He has a final, departing monologue that is one of the more touching moments of the play.

Jon Tawnson and Susan Marie Rhea play Simon and Anna, the younger couple and parallel to David and his lost love.  They also give the audience one of the only dramatic moments in the play when Simon, against the wishes of Anna, decides to do a little business on Christmas Eve, causing sparks to fly and feelings to get hurt.

Mick Tinder handles the grieving husband, Richard, with real nuance.  His make up scene with David was one of the highlights of the evening.

David Jourdan and Mike Kazemchak round out this cast of Christmas Eve pub drinkers.

Matthew Keenan also designed the set, which was marvelously authentic.  Set dresser and properties mistress Carol Baker must be given at least part of the credit for the pub’s realism.  Kelly Peacock did costumes, Dan Marin the lights, and Jake Null the sound design.

Advisory: lots of drinking and some language.