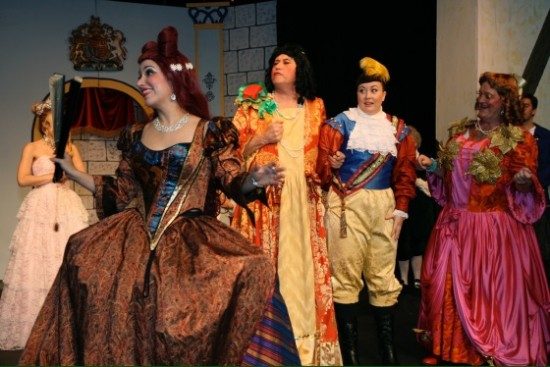 In the worthy and wonderfully silly hands of The British Players, Cinderella is an exhilarating comic riot not to be missed.

Originally known as The British Embassy Players, the troop brings British plays to Washington and delivers hefty sums from ticket sales to British and American charities, all the while aiming, according to the program notes, at “enhancing Anglo-American relationships.”

This they undoubtedly do, and had the Brits been staging such delightful shows back in 1775 we might never have revolted.  Originally formed by a small group of embassy staffers in 1964, The British Players now number about 200 members including many Americans.

As the lights come up we are transported to a village street of centuries past where stands the crumbling ediface of the not-so-prosperous Hardup Hall.  Here we meet the first of the play’s many delightful characters – Kindheart the Fairy Godmother, played winsomely by actress Clare Palace, who speaks Cockney in couplets.  She is not only a fairy armed with a wand but also a clown as the style of this show is British pantomime, not to be confused with silent mime.  Dating back to the Restoration, British pantomime, or “panto” as the Players call it, features a traditional children’s fairy tale humorously embellished with odd characters and what the notes call “a wonderfully strange mixture of elements from the theatre, ballet, opera, music hall and musical comedy.”  Derived from the Italian commedia dell-arte, British  pantomimes are performed at Christmas.

…a superb night at the theatre.

After the Fairy Godmother temporarily disappears, we next meet Buttons, also a clown, played with great appeal by Allan Brown.  The servant of Baron and Baroness Hardup he is hopelessly in love with Cinderella, who is portrayed with golden-haired good looks by Stephanie Santell.  John O’Leary ably performs the part of the destitute Baron and Michelle Hessel is sensational as the Baroness, who is a deliciously wicked stepmother. 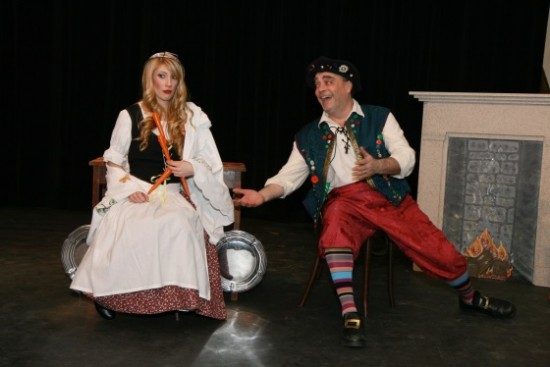 Her spectacularly ugly daughters Fifi and Fru-Fru are acted in drag with comic genius by Colin Davies and Malcolm Edwards.  Costume Designer Joan Roseboom extravagently costumes these two big, deep-voiced men with feminine sumptuousness and as a comic pair they are unstoppable in bringing the house down.  Tromping heavy-footed in their gowns, they lustily pursue Prince Charming and his aide, along with alarmed men in the audience, and it is all great fun.

In keeping with the gender-switching tradition of the pantomime, the Prince is portrayed right royally by a lady, Karina Gershowitz, and his male friend Dandini played well by a second lady actor, Jenna Sutton.

Combine these excellent performances with the sure-footed directing of Charles Hoag, very fine music by Arielle Bayer, winning choreography by Gershowitz, Heather Latiri and Kim Newball, lights and great sound by Don Slater and Ben Allen, various dancers and ghosts, and you have a superb night at the theatre.

Such fun and good cheer, thanks to The British Players.

Advisory: No violence. Occasional sexual innuendo in good taste that goes over the head of children in the audience.