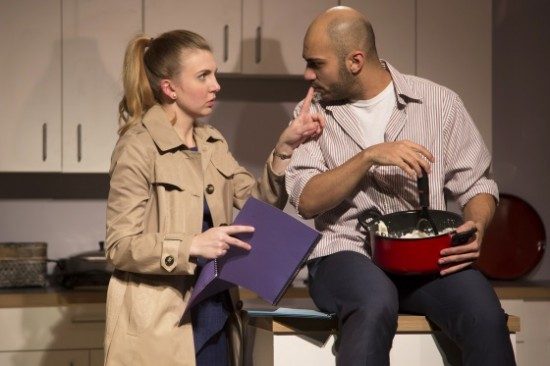 Emily Kester as Marianne and Maboud Ebrahimzadeh as Nick.
Photo by Igor Dmitry.

Einstein and others have had their thought-experiments. Whether they were chasing after a beam of light or worrying about a cat, they created thought-experiments that used the imagination to pose a series of “what would happen if” questions.

For example, what if our government’s propensity for spying on speech invaded not only our emails and iphone conversations and googling searches, but also, ala Orwell’s famous Big Brother of 1984, began monitoring our kitchens and bedrooms listening for speech patterns and questioning that indicate a divergence from the norm? 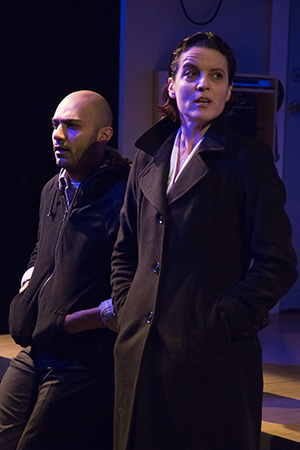 What if that Big Brother, instead of picking up, detaining, disappearing only those people suspected of planning acts of “terrorism,” also picked up anyone who challenged the status quo in any meaningful way, say by organizing an “outside the box” political party capable of garnering 28% of the voting electorate and not your normal Ralph Naderish 5%?

What if those terrorists that the government picked up, detained, disappeared did not look like foreigners wearing strange garb and spouting medieval theological doctrine about the subjugated place of women in society but looked like every day, normal, bourgeois aspiring, recycling plastic types of college-educated folks?

In other words, these terrorists being rounded up by G-men looked like your average Washingtonian young professional out for an evening of theatre, say at Studio Theatre’s fourth floor 2nd Stage?

And say the play was Edgar and Annabel by British playwright Sam Holcroft and directed by longtime Washington actress Holly Twyford.

And say the play was plopped before us like an experiment, minus the Petri dish but in a square box with a small living room kitchen combination.

And say you had two actors, posing as two political operatives acting like said normal bourgeois couple, with enough money not to have to worry about paying the rent or (because they had no children) paying for children’s doctor bills or for children’s college and who were thus free to be as liberal as they wanted to be.

Ms. Kester and Mr. Ebrahimzadeh do a fantastic job portraying the fictious couple Edgar and Annabel of the play’s title.  Their introduction is a bumpy one.

Annabel is preparing a chicken dinner when Edgar arrives home from work.  Annabel turns and upon seeing her husband panics.  She soon draws a knife.  It turns out that this Edgar is not the same Edgar poor Annabel has grown accustomed to seeing when she woke up every morning.  Her Edgar has been replaced by a new actor, i.e., a new political operative.  He hands her a script.  They read the lines, making all the appropriate sounds, but not worrying about the movements and behaviors.  Remember, in this thought-experiment only the words matter, and supposedly the speech patterns and the inflections, etc., which would make reading from a script a dead giveaway to Big Brother, but let’s not worry about that.  After all, it’s an artistic thought-experiment and not being reviewed by the Academy of Science. 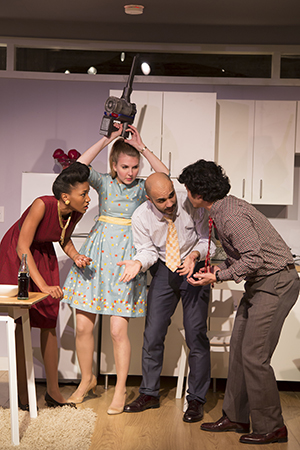 The operative Marianne will have none of it.  She does not want a new Edgar.  She wants her old Edgar back, played apparently by a guy named Carl, but he has disappeared, so Nick has to step in and take the role.  Marianne rebels.

So Nick and Marianne have a meeting with the director, or their handler (to use operative language), Miller.  Lisa Hodsoll plays the part of the hard edged Miller to perfection.  All no nonsense and capable of smacking sense into even the most disgruntled of ex-soldiers, like Nick, or emotionally drained operatives like Marianne, Hodsoll’s Miller brings a powerful sense of reality to a world that is sometimes more fictional than it ought to be.

Then we meet another Edgar and Annabel, but their names are Tara and Marc, played by Lauren E. Banks and Jacob Yeh (as we never see them outside the box, we never learn their real names).  The karaoke scene they play with Nick and Marianne is one of the best in the play.  There is nothing like watching a low tech, comic version of The Voice while the contestants make a bomb.

Yes, that’s right, a bomb, a big bomb, because in this thought experiment, as the political repression intensifies and squeezes a person’s ability to express him or herself–both feelings toward another person and beliefs about the world—so does a person’s response in opposition to that repression.  Thus, with intensification of the monitoring and disappearing comes the move toward violence as a solution to end the repression.

Rounding out the cast are Shravan Amin and Maggie Erwin, who play convincingly Anthony and Claire, who play Edgar and Annabel, that’s right the fictional bourgeois couple addicted to recycling.  You get the picture.

Holly Twyford’s direction is spot on, illuminating the play’s dramatic arc to perfection and helping differentiate the various layers of the play for the actors and thus the audience.  Her casting of the play also gives the production’s experiment added authenticity.

With Edgar and Annabel we are given a chance to observe, and to empathize with, the making of a freedom fighter, i.e., a terrorist.  The play’s thought-experiment sidesteps issues of ideology, ethics, and political identification, focusing instead on the larger issue of technological totalitarianism run amuck.  The fact that the NSA’s over-reach and Snowden’s delimma  have so much been in the news of late only adds to the poignancy of the production.

We do not know what Nick / Edgar and Marianne / Annabel are struggling for other than the right to struggle for something without being subjected to spying, monitoring, threats, and possibly arrest and detention.

And isn’t that expectation, after all, what democracy is all about.

Edgar and Annabel is excellent political satire with enough comedy to keep the ideas percolating like a fine brew.

Edgar and Annabel plays at Studio Theatre’s 2nd Stage, the corner of P and 14th Streets, Washington, DC, through January 5.  For information and tickets, click here.